On November 3, a two part event about girl’s rights worldwide will took place on Seton Hall’s campus. Brought to us by Grassroots organizer Julie Wilig of Girl UP of the United Nations Foundation, “A Day in The Life of a Girl” will provided attendees with a chance to explore gender inequality globally from a variety of perspectives. The event  included an interactive tabling by an assortment of student organizations, followed by a panel with Alex Sheuffer of Girl UP and three SHU professors.

The event organizers are Cynthia Sularz, a senior Diplomacy and International Relations and Modern Languages major, and Cheyenne Crawford, a junior Political Science major and Diplomacy minor. “A Day in The Life of a Girl” has been in the works since spring of this year. Sularz met Julie Wilig initially while in Australia and thought that Girl UP provided the perfect medium for discussing girl’s rights in a way that appealed to college students.

Since both Sularz and Crawford have a passion for girl’s rights, they decided to host an event with Girl UP to raise awareness. “We felt like people on campus were passionate about [girl’s rights] but there wasn’t a conversation happening so we wanted to have the ability to create a conversation and open up discussion on different areas of what the girl on a global scale is dealing with,” Crawford told the Envoy.

Joli Doñé, a senior Diplomacy major staffing the Black Student Union and MSU tables, said, “A lot of people seem engaged in the different facts we have been presenting and in our interactive TV portion in which people put their faces in a cut-out of a television and say that they would like to see people like themselves represented on the TV.”

John Kerry, a senior Diplomacy major and President of the ONE Campaign, told the Envoy, “The ONE Campaign gives foreign aid to sub-Saharan Africa to help alleviate poverty, and it’s really an issue that affects women and girls, so working with Girl UP was the perfect opportunity because it allowed us to both showcase gender inequality but also address extreme poverty.”

At the table, attendees could write letters for an act that would make electricity more accessible in Africa, and learn about the #PovertyIsSexist campaign for over the summer.

The interactive panel was  hosted by SAVE and, in addition to Alex Sheuffer, included Dr. Nabeela Alam, Dr. King Mott, and Professor Melissa May. Alam discussed gender in relation to education and poverty globally, and how educating women in addition to men creates stronger households. May talked about the portrayal of women in the media worldwide and about reproductive rights. Mott talked about the importance questioning gender roles and the socialization of gender for each individual in addition to trying to make changes outside one’s self.

“From the beginning, we wanted to make sure that this would not be dominated by one sector of thought. So by reaching out to professors in the sociology department, the political science department, the diplomacy department, as well as the PR department, it shows that in order to tackle any issues, you need a variety of experts,” Sularz told the Envoy.

The Girl UP event was well attended and at the end, both hosts and Alex Sheuffer indicated that in the spring semester, Girl UP would be having another event on campus. Additionally, Girl UP had a table with an interest sheet for students to sign up to potentially create a Girl UP chapter on campus. 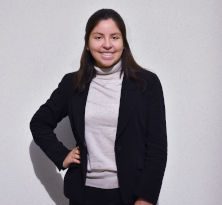