It has been almost five years since the peaceful protests of Syria, inspired by the Arab Spring, turned into a full-out civil war.

Since its beginning, the Syrian conflict has been a confusing one, made worse by the long list of states and non-government organizations backing either the rebels or the Assad regime.

On October 29, Students for Justice in Palestine (SJP) hosted a panel called “Understanding Syria” in an attempt to demystify what some call one of the most complicated wars in recent history.

The panel brought together three individuals involved in trying to bring awareness to the many facets of the crisis. Edina Skaljic, one of the leaders of the I Am Also A Refugee campaign and a refugee of the Bosnian genocide, brought the perspective of those fleeing the conflict.

Qutaiba Bakeer Agha was in Damascus when the Arab Spring broke out, and brought to the table the issues facing the rebel forces in fighting Assad and the Islamic State.

Sarab Al-Jijakli, a prominent member of the Syrian-American community, has been working to bring more refugees into the United States, and addressed the international response and foreign involvement in Syria since 2011.

The panel, moderated by senior Belal Bahader, discussed the state of the Syrian nation after more than four years of conflict.

Arguably the most important question asked was what distinguishes refugees from migrants.

Skaljic gave a firm answer that sets apart the reality of Syria from how the media is portraying it: “A refugee is someone who is coming from a warzone. A migrant chooses to come, not under duress.”

Moreover, she pointed out that, though major European and American news agencies are labelling the phenomenon as a “Syrian migration,” the title cannot be more off the point, since everyone fleeing the nation is doing so out of fear for their lives.

The protests started on March 15, 2011. Agha says the protesters were crying “for freedom, for their dignity,” but did not expect their movement to turn into a civil war quickly.

The explanation presented was extremely simple: the Assad regime did not know any other way to respond to the revolt.

Jijakli explained, “When the society is run by a mafia family, when it comes to power through violence, the only way to deal with threats is through other brutality.” Thus, the deployment of security forces was naturally going to escalate.

Once Jijakli pointed to the brutality of Assad, the panel flowed into Agha discussing what he saw happening on the ground, including his own torture and imprisonment for “delivering aid to a besieged area” of Damascus.

His haunting story of being beaten by seven officers for nearly five hours, which he called the “welcome party,” before being interrogated was accompanied by pictures of his battered body taken upon release.

At this point, the panel drew to a close with two videos, one showing a family and rebels being gunned down by Assad soldiers, and another of an ecstatic Damascus man receiving food while explaining the price inflation in areas still under heavy siege.

The panel broke from a strict presentation of facts to a heavier tone. “The U.S. is providing the illusion of support,” Jijakli said. “No one wants this revolution to end.”

The panel concluded that the war in Syria has turned from a democratic protest to a means for world powers (i.e. the Gulf States and U.S. backing the rebels, and Russia and Iran with Assad) to have a tiff without any consequences for themselves.

The Islamic State group, which has dominated media coverage, was rarely mentioned by the panel—they are, in the bigger picture, only a minor group being used to justify outside involvement in what should have remained an issue to be dealt with by Syrians.

The panel agreed that, to resolve the stalemate, the UN should pass another Security Council resolution through the permanent five members to reinstate peacekeeping programs.

Otherwise, the Syrian Civil War stands to last for years to come, and in the event that the Assad regime is eventually toppled, “the worst is yet to come” as the nation attempts to recover from such a devastating collapse of the state, Skaljic warned.

For readers wishing to know more, the panel suggested ANNA News (predominantly in Russian but translatable to English) and articles by Charles Lister of the Brookings Institution.

Those wishing to aid those affected by this crisis were encouraged to direct payments to NuDay Syria, or to simply reach out and contact their state representatives and federal officials to voice their concern. 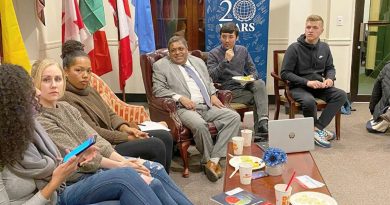 An Interview with the President of H.A.I.R. (Having Appreciation in Realness)