Study abroad is an incredible experience that every student should do if they are able. You get to peek into another culture for a few months; try their food, learn a new language, interact with new people. As a student on Semester at Sea, I get to do that with ten different cultures, foods, and groups of people. For my study abroad experience, I decided to become a true pirate and live on a boat for four months.

My name is Emily O’Connor and I am a junior at Seton Hall. I study diplomacy and international relations, as well as philosophy with minors in Spanish and business in legal studies. As a diplomacy student, I knew that a program that would immerse me in vastly different countries (different political systems, different religions, different customs) was one that I needed to do.

While some argue that Semester at Sea doesn’t allow you to truly live in a culture, I must respond that learning a little about many countries is more valuable than experiencing only one place. Though the application process was an extensive one, with essays, forms, and pre-visa approval, my interest in this program never wavered.

What Semester at Sea allows its students to do is learn theoretical concepts in the classroom, then go and experience the concepts in real life. For example, I take a class called business ethics and learn about the duty that a business has to other companies, its customers, and the environment. Currently, we are docked in Croatia and we learned about the swindling that businesses sometimes commit against tourists by issuing extra charges and price increases to non-locals. At dinner with a group of friends one evening, the restaurant tried to give us incorrect change and I was pushed by their manager. It was a scary lesson but one that makes me a better traveler.

We started our journey in Southampton, England. We then traveled to Rome and Naples, Italy. Our original itinerary featured Istanbul, but due to rising tensions and the refugee crisis, we went to Dubrovnik, Croatia instead.

Our next few ports are Athens, Greece, Valencia and Barcelona in Spain, and we will then travel to Africa, stopping in Casablanca, Morocco, and Senegal. The ship will then travel across the ocean and stop in El Salvador, Brazil, Trinidad & Tobago, Costa Rica, and finish by traveling through the Panama Canal to disembark in Costa Rica.

The next few months will be some of the most exciting I’ve ever had: riding camels in the Sahara Desert, piranha-fishing in the Amazon jungle, and working on reforestation in Costa Rica.

Many people have said, “That’s not real school,” and refer to The Suite Life on Deck. It is unconventional, for sure—I have class on Saturdays and Sundays, or any other day we’re on the ship. If we’re sailing for six days, I’ll have class either five or six days in a row.

It is unlike any other study abroad program, so while I can never get settled into a culture, I’m constantly on my toes to jump into a new world. It’s difficult to tell whether the journey will get easier as it continues, but I will continue to write for the Envoy throughout the semester, so look out for updates on my future excursions! 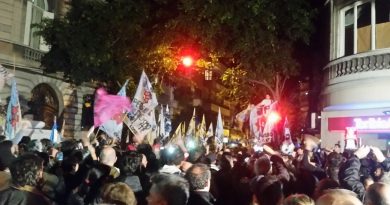