The ONE Campaign hosts an annual summit in Washington, D.C. for college campus chapters and volunteer leaders to gather and lobby members of Congress. This year, chapter leaders from across the United States met in Washington from February 27 to March 2. Two Seton Hall students represented the Seton Hall chapter: chapter President Christina Minneci and Bjorn Schwarzenbach. The two heard from speakers, met with congressional delegates, and networked with other ONE Campaign chapters. The summit called on Congress to support foreign aid for underdeveloped regions to combat extreme poverty. In total, more than 150 ONE Campaign volunteers had nearly 250 meetings across D.C. with members of Congress.

This year, there were two goals for the summit. First, ONE Campaign volunteers lobbied for Congress to continue to support appropriations funding for programs like GAVI (Global Alliance for Vaccines and Immunization), PEPFAR (President’s Emergency Plan For AIDS Relief), and the Global Fund. Funding for these programs helps provide millions of people with life-saving vaccines and medication.

Second, they asked their respective Congressional representatives to co-sign the Electrify Africa Bill, which supports investment in African energy. Currently, there are more than 550 million people living without power in sub-Saharan Africa, according to the ONE Campaign. This has become a barrier to educational systems and economic development.

“My biggest take away from the summit was how vital youth advocacy is in our world today,” said Minecci. “The general consensus I got, whether I was speaking with Congressional Representatives, high level executives, or ONE staff, was they prioritize and care greatly about the youth voice.”

The ONE Campaign prepared volunteers on lobbying techniques by providing consultants from both sides of the aisle. Many of the programs already have bipartisan support, but lobbying is still vital to securing funding and for bills to proceed from committee to the floor. Volunteers dropped off handwritten letters to senators showing widespread support for foreign aid. Schwarzenbach and Minecci delivered letters that the Seton Hall chapter wrote to Senator Bob Menendez of New Jersey. After the meetings, volunteers gave the staffers of Congressperson a Viewmaster with reasons to support foreign aid.

Besides lobbying, the event featured speakers such as U.S. Trade Representative Michael Froman, who spoke about how trade can impact development. “We know that trade fuels faster growth, facilitates investment, spurs development, and reduces poverty in developing countries, which translates into more jobs and increased incomes for the poor,” said Froman.

ONE Campaign CEO Michael Elliot spoke about ONE’s impact on development. Ms. Minecci sat down with the (RED) CEO Deb Dugan, as well, to discuss the former’s volunteer work on campus as part of the next generation who will lead the future. 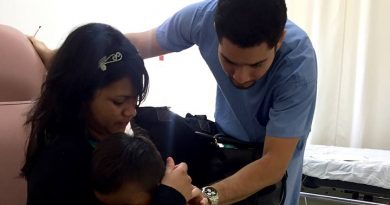