Antibody drug conjugate Glembatumumab vedotin (GV) is in late phase 2 trials for patients with triple negative breast cancer (TNBC) – those whose tumors do not express estrogen, progesterone, or HER-2. Approximately 15% of breast cancer patients have TNBC; it is an important area of research for both researchers and clinicians alike because:

What is Glembatumumab vedotin (GV)?

gpNMB is a protein overexpressed by multiple tumor types, including breast cancer and melanoma. gpNMB has been shown to be associated with the ability of the cancer cell to invade and metastasize and to correlate with reduced time to progression and survival in breast cancer. The gpNMB-targeting antibody, CR011, is linked to a potent cytotoxic tubulin inhibitor, monomethyl auristatin E (MMAE), using Seattle Genetics’ proprietary technology.

GV is designed to be stable in the bloodstream, but to release MMAE upon internalization into gpNMB-expressing tumor cells, resulting in a targeted cell-killing effect. 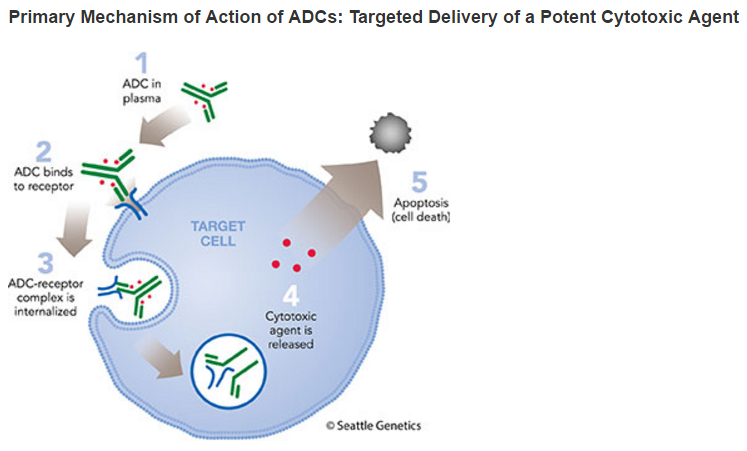 gpNMB is a type I internalizable transmembrane protein; very little is known about its physiological function, but it is believed to be associated with cell invasion and motility particularly in breast cancer cells.  Blockage of gpNMB induced not only HER2 but also EGFR expression. On the other hand, inhibition of HER2 by trastuzumab increased expression of gpNMB. Depletion of gpNMB increased sensitivity of trastuzumab, suggesting that gpNMB may play an important role in crosstalk of signal transduction for breast cancer. gpMNB is expressed in breast (5/6:83%), gastric (3/6:50%), colon (1/7:14.3%) cancer cell lines. Of breast cancer cell lines, gpNMB was highly expressed in SK-BR3 (HER2 positive), BT474 (HER2/ER positive), MDA-MB-157 (Triple negative) cells. 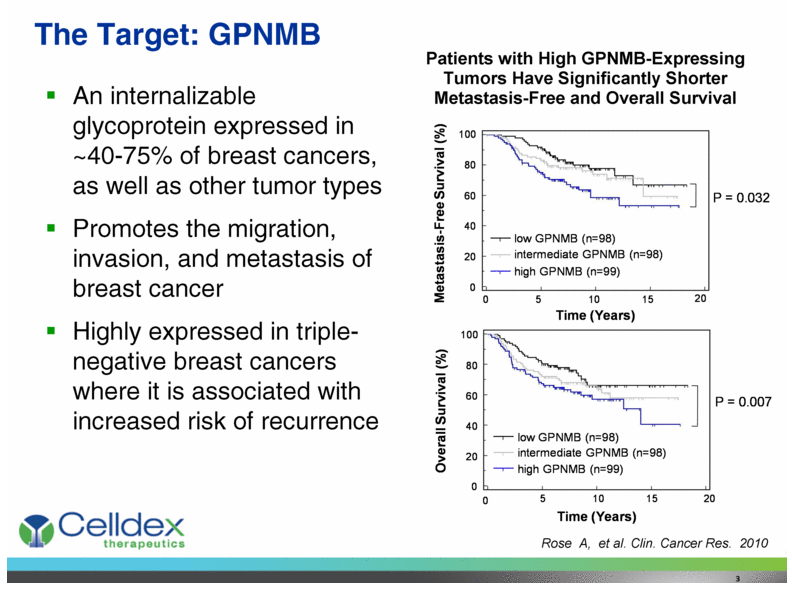 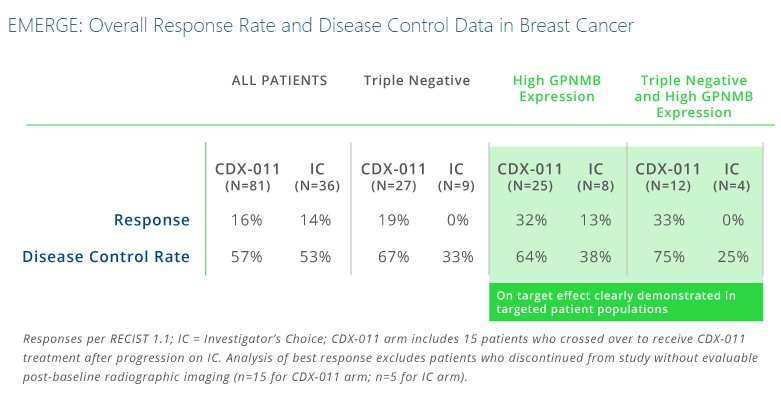 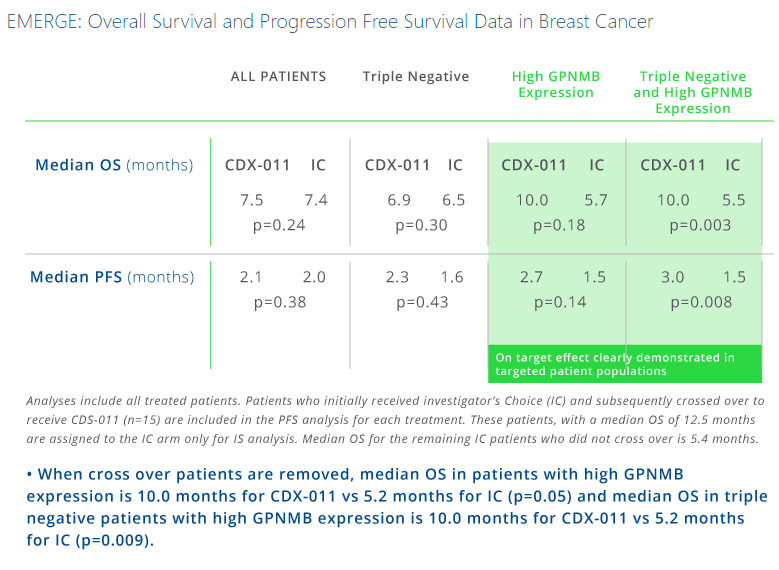 The METRIC Trial (NCT01997333) is an international, two-arm phase II study in which patients are randomized 2:1 to GV (1.88 mg/kg IV q 21 days) or capecitabine, a current standard of care for this population (2,500 mg/m2 daily for d1-14, q21 days) until progression or intolerance. Crossover in trial is not permitted.

To be eligibility to participate in this trial, patients must meet criteria including >25% of tumor epithelium gpNMB+ by central immunohistochemistry (IHC) screening of archival tissue; estrogen receptor and progesterone receptor <10% and HER2 negative [0-1+ IHC, or ISH copy number <4.0/ratio <2.0] by local assessment; ECOG 0-1; taxane resistance; anthracycline exposure (if indicated); <2 chemotherapy regimens for advanced BC; measurable disease; no persistent Grade >2 toxicity.

The trial has 85% power to detect a PFS (progression-free survival) HR (hazard ratio) of 0.64 with two sided α = 0.05. The hypothesized median progression-free survival is 4.0 months for capecitabine and 6.25 months for GV. Target accrual is open for 300 patients. While this is a Phase 2 study, the patient size is large enough such that it could be submitted for FDA approval if the evidence is strong enough.