Healthcare firm Grail, which has been formed by the gene sequencing company Illumina, named Jeff Huber, former Google X Senior Vice President, as its CEO in February. With Huber’s experience in developing large-scale data, Grail hopes to improve gene sequencing technology used in blood tests for early detection of cancer in asymptomatic patients so that immunotherapeutic strategies, as opposed to toxic chemotherapy, can be employed with the goal of curing cancer.

To understand how blood tests can be used in early cancer detection, let’s first discuss how the body detects and responds to cancer cells. Immunocytes of the innate immune response have the ability to recognize foreign cells, including cancer cells, in the body and target them for attack and destruction. The principal cells in these attacks are natural killer (NK) cells and cytotoxic T lymphocytes (CTLs or Tc). CTLs are antigen specific, and recognize peptides that are presented to them via major histocompatibility complex (MHC) class I molecules. Cancer cells have the ability to downregulate MHC class I on their cell surface, allowing them to escape attack by CTLs. NK cells, however, are programmed to recognize and kill cancer cells, despite the downregulation of MHC class I molecules on their surface (Figure 1). In doing so, NK cells release cytokine signals, including interferon-γ (IFN-γ), to recruit more immune cells, including macrophages and neutrophils, to the site of attack. After these cells are recruited, the immune system is able to mount humoral (antibody) and cellular responses, or an adaptive immune response, for a more specific and effective attack, in which large numbers of cytotoxic t-cells (Tc) are seen. 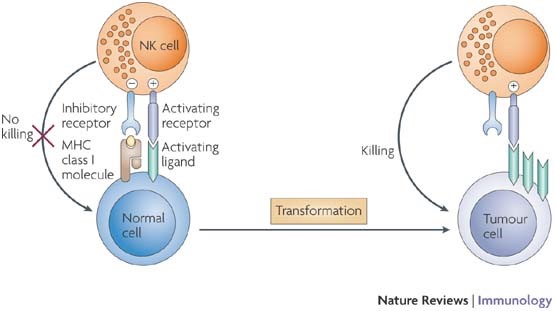 Figure 1: Natural killer (NK)-cell activation is regulated by a balance between signals mediated through activating and inhibitory receptors. Upon cellular transformation, MHC class I ligands for inhibitory receptors are often reduced or lost. In parallel, cellular stress and DNA damage lead to the upregulation of ligands for activating NK-cell receptors on the tumour cell. Together, these events shift the balance towards NK-cell activation and induction of cytolytic effector functions resulting in target-cell killing. During tumour progression, tumour variants may evolve that upregulate ligands for inhibitory receptors and/or lose ligands for activating receptors. These tumours may escape NK-cell-mediated recognition. (http://www.nature.com/nri/journal/v7/n5/fig_tab/nri2073_F1.html)

In cancer development, cells begin to mutate and become more and more abnormal, taking on characteristics not seen in normal cells. Unlike normal cells, cancer cells have the ability to indefinitely proliferate and have a reduced susceptibility to apoptosis. For these reasons, cancer patients can be found to have abnormally high levels of certain cell types, or tumor markers.

Blood tests can be extremely useful in determining abnormal cell counts and the presence of tumor markers. One of the most basic blood tests is called a complete blood count, or CBC. CBC tests measure the amount and type of white blood cells in your body, including neutrophils and monocytes, as well as the amount of red cells and platelets. CBC tests are particularly useful in diagnosing blood cancers, such as lymphoma and leukemia, and to find out if cancer has metastasized to the bone marrow. Blood tests specific for cancer/tumor markers can also be performed to detect cancer proteins and circulating tumor cells for cancer diagnosis. Some tumor markers used in cancer diagnosis include BCR-ABL fusion gene (Philadelphia Chromosome) found in leukemia, prostate-specific antigen (PSA) in prostate cancer, carcinoembryonic antigen (CEA) in colon cancer, and CA-125 in ovarian cancer.

With passive immunotherapy, immune effectors cells (e.g., enriched and expanded CTLs, and Chimeric Antigen Receptor T-cells or CAR T-cells) and molecules, such as antibodies and cytokines, are injected into the patient to effect cancer cell killing by cell-mediated killing (via Fas ligand and granzymes), or complement-dependent cytotoxicity (CDC) and antibody-dependent cellular cytotoxicity (ADCC). CDC refers to a process in which the immune system kills pathogens by attaching the first component of the complement system to the Fc region of an antibody, resulting in a proteolytic cascade that ultimately results in cell lysis and death. ADCC is enabled by NK cell and macrophage binding to Fc receptors of antibodies that have attached to antigens on the cancer cell (Figure 2). Checkpoint inhibition (e.g., CTLA4 and PD-1 binding antibodies) block signaling pathways that abrogate the response of CTLs, thereby extending the duration and intensity of the immune response against tumor antigens. 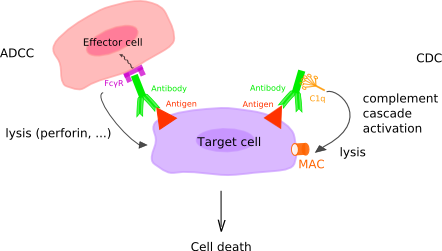 Figure 2: Complement-Dependent Cytotoxicity and Antibody-Dependent Cellular Cytotoxicity. In complement-dependent cytotoxicity (CDC), the C1q binds the antibody and this binding triggers the complement cascade which leads to the formation of the membrane attack complex (MAC) (C5b to C9) at the surface of the target cell, as a result of the classical pathway complement activation. In antibody-dependent cellular cytotoxicity (ADCC), Fc gamma receptors (FcγR or FCGR) on the surface of immune effector cells bind the Fc region of an antibody, itself specifically bound to a target cell. The cells that can mediate ADCC are nonspecific cytotoxic cells such as natural killer cells, macrophages, monocytes and eosinophils. Upon FCGR binding to the antibody, the FCGR ITAM is phosphorylated, which triggers the activation of the effector cell and the secretion of various substances (lytic enzymes, perforin, granzymes, TNF) that mediate the destruction of the target cell. (http://www.imgt.org/IMGTeducation/IMGTlexique/A/ADCC_and_CDC.html)

Monoclonal antibodies work by attaching to certain parts of cancer cells, making them more visible to the immune system. For example, the monoclonal antibody Rituxan, which is used for B-cell malignancies such as Non-Hodgkin’s lymphoma, B-cell lymphoma, and B-cell chronic lymphocytic leukemias, attaches to a specific protein only found on B-cells, called CD20. By attaching to CD20, Rituxan makes the cancer cell more visible to the immune system, allowing it to attack the cancer (Figure 3). 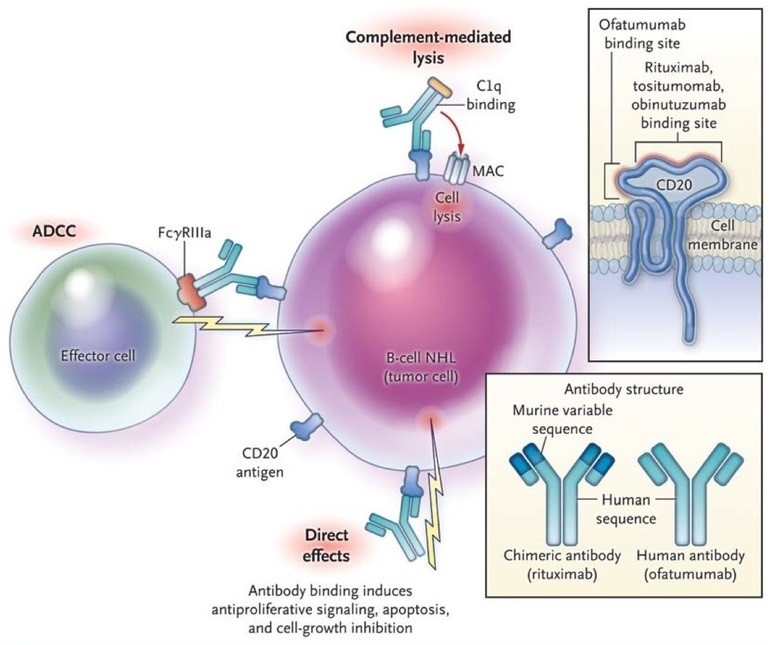 Figure 3: Mechanisms of Action of Anti-CD20 Antibodies. Anti-CD20 antibodies bind to the CD20 molecule on the surface of the malignant B cell in non-Hodgkin’s lymphoma (NHL), leading to cell death. Three mechanisms of action of anti-CD20 antibodies have been proposed. In complement-dependent cytotoxicity, the first component of complement (C1) binds to the Fc portion of the anit-CD20 molecule, resulting in the activation of the complement cascade and cell lysis through the formation of membrane attack complexes (MAC). In antibody-dependent cell-mediated cytotoxicity (ADCC), effector cells, such as natural killer cells or macrophages, bind to the Fc portion of the anti-CD20 molecule through Fcγ receptors; the effector cells then release effector molecules such as perforin, which causes cell lysis. In direct cytotoxicity, the anti-CD20 antibody induces internal signaling within the tumor cell, causing antiproliferative effects or cell death, which may involve apoptosis or other cell-death pathways. In the top inset, anti-CD20 antibodies bind to an extracellular portion of the CD20 molecule. Most anti-CD20 antibodies, including rituximab, tositumomab, and obinutuzumab, bind to the larger of the two extracellular loops within the CD20 molecule; this loop includes the alanine-N-proline (ANP) residues at positions 170 to 172. Ofatumumab binds to two sites on the CD20 molecule: the smaller extracellular loop and positions 159 to 166 on the larger loop. This unique binding pattern of ofatumumab, which results in increased proximity of the antibody to the cell membrane, may account for the greater potency of the drug in inducing complement-mediated lysis. In the lower inset, the structure of chimeric and human antibodies is shown. (http://mulicia.pixnet.net/blog/post/29459210-%5Bnejm%5Danti-cd20-antibody-therapy-for-b-cell-lymphomas)

With CAR T-cell therapy (Figure 4), T-cells are collected from the patient’s blood sample via a process called apheresis, and sent to a laboratory where they are chemically engineered to express t-cell receptors that recognize a specific antigen on a cancer cell. The reengineered CAR T-cells are allowed to proliferate, and returned into the patient’s bloodstream where they again proliferate, and then attack and kill cancer cells possessing the antigen they are engineered to recognize. This form of therapy has had great responses in leukemias and lymphomas. 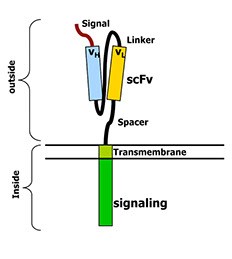 Figure 4: Chimeric Antigen Receptors. This cartoon shows the structure of an artificial T‐cell receptor called a chimeric antigen receptor. These receptors have two parts. One part is outside the cell and has been made from an antibody. This part recognizes a particular protein on the cancer cell’s surface. The second part of the receptor is inside the T‐cell. It sends the T-cell a signal to activate when the outside part of the receptor recognizes a cancer cell. Almost any cancer target can be recognized in this way, and the receptor can transmit very powerful signals to the T‐cell so it fully activates. (http://www.thestiliyanpetrovfoundation.com/cart-t-cell.html)

The other form of immunotherapy, active immunotherapy, involves presenting antigens in order to induce an immune response against the cancer cells. In order for an antigen to be recognized by the immune system, it must first be presented by a dendritic cell to T-helper cells, which then induce specific CTL and B cell (antibody) responses.

Huber decided to take on the role as CEO for Grail not only because of his experience with Google, but also for personal reasons. Huber’s wife Laura passed away from Stage IV Colon Cancer, and Huber believes that if the diagnostic tools to be used by Grail had already been available, her cancer may have been detected early and her life potentially been saved.

To relate to Huber, I can personally attest that early detection in asymptomatic patients can be key in saving a cancer patient’s life. Back in May of 2014 my mother visited her physician for a routine check-up regarding kidney stones, where the physician ordered blood tests, including CBC. When the results came in, my mother was delivered with news regarding more than just her kidney stones. The CBC test revealed extremely high levels of blast cells, which are undifferentiated white blood cells often found in those with acute leukemia. Days after this finding, she was sent to Memorial Sloan Kettering for immediate treatment where she underwent a bone marrow transplant, a form of passive immunotherapy. Today, she is 2 years in remission, and showing no signs of relapse. If not for the early detection, the disease would have progressed rapidly, and not been detected until the showing of symptoms, which may have been too late.

Early detection can play a pivotal role in curing cancer patients – using routine blood tests to screen for cancer has the potential to save many lives and to reduce the morbidity of cancer treatment by enabling the use of less toxic and disruptive interventions.