Darzalex (daratumumab), and anti-CD38 monoclonal antibody for the treatment of patients with multiple myeloma who had already undergone at least three prior standard treatments, received FDA approval. The product was developed by J&J and Genmab.

Researchers said it is the first antibody drug to demonstrate effectiveness against myeloma without having to be combined with other medicines.

It will compete with Celgene’s Pomalyst (pomalidomide) and Amgen’s Kyprolis (carfilzomib) for third-line treatment of the disease. The former acts as an immune modulator [similar to Revlimid (lenalidomide, Celgene) and Thalomid (thalidomide, Celgene)], and the latter [like Velcade (bortezomib)] blocks proteasomes, which are necessary to rid the cancer cells of the excess proteins that are made.

“The efficacy we’re seeing is quite impressive for a clinical trial of refractory multiple myeloma, given that many patients had already undergone five or more types of treatment,” according to lead Darzalex investigator Dr. Saad Zafar Usmani, a hematologist at Levine Cancer Institute/Carolinas Healthcare System, who presented his daratumumab data at the American Society of Clinical Oncology meeting in May.

Darzalex also works differently from Pomalyst, which (along with the other immunomodulatory drugs lenalidomide and thalidomide) targets a protein known as cereblon and potentiates its downstream effects on interferon regulatory factor 4 (IRF4), and Kyprolis, which, like J&J and Takeda’s Velcade, is a proteasome inhibitor. Darzalex is an antibody that targets a particular protein, CD38, on the surface of multiple myeloma cells. That differing method of action is what makes the new drug valuable for treating relapsed disease. 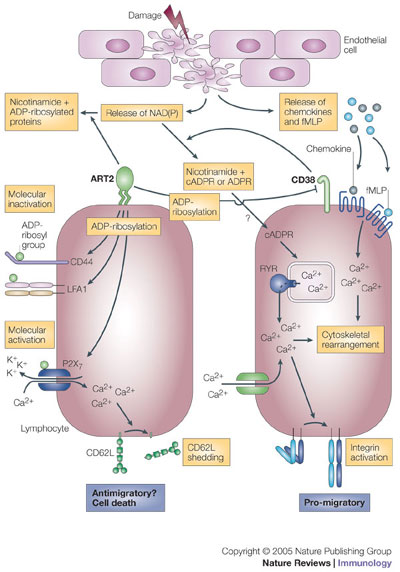 NAD(P) is released from damaged cells. It can then be metabolized by CD38 in a way that promotes directed cell migration to specific stimuli, such as fMLP (N-formyl-methionyl-leucyl-phenylalanine) and certain chemokines. Cyclic ADP-ribose (cADPR), which is produced from NAD(P) by CD38, triggers the release of calcium ions (Ca2+) from ryanodine receptor (RYR)-regulated intracellular stores, and it also causes sustained influx of extracellular Ca2+. This increase in cytosolic Ca2+ concentration enhances chemokine- and fMLP-triggered signals that lead to cytoskeletal rearrangement (and possibly to integrin activation) and directed movement. For other cells, NAD(P) is a substrate for ADP-ribosyltransferases (such as ADP-ribosyltransferase 2, ART2), which drives covalent modifications of specific cell-surface molecules. ADP-ribosylated cell-adhesion molecules and CD38 become functionally inactive. By contrast, ADP-ribosylation of the purinoceptor P2X7 activates this molecule and causes opening of Ca2+ channels and shedding of CD62L. ADPR, ADP-ribose; K+, potassium ion; LFA1, lymphocyte function-associated antigen 1; NAD(P), NAD or NADP. http://www.nature.com/nri/journal/v5/n10/fig_tab/nri1705_F3.html

CD38 is a type II transmembrane glycoprotein, the extracellular domain acting as an ectoenzyme, catalyzing the conversion of nicotinamide adenine dinucleotide (NAD+) into nicotinamide, adenosine diphosphate–ribose (ADPR), and cyclic ADPR. CD38 is expressed on many types of cells, but recent interest focuses on its role on B lymphocytes. Its expression during B-cell ontogeny is tightly regulated: it appears on bone marrow precursor cells but is lost on mature lymphocytes; on germinal center cells it protects against apoptosis, but on leaving the germinal center, memory cells lack the antigen; on terminally differentiated plasma cells it is one of the few surface antigens present. In chronic lymphocytic leukemia (CLL), expression of CD38 signifies a poor prognosis, though it does not correlate precisely with the presence of unmutated immunoglobulin variable region (IgV) genes and may vary during the course of the disease.

The fact that CD38 is expressed on terminally differentiated plasma cells provide specificity for the use of daratumumab in multiple myeloma. It induces potent antibody-dependent cellular cytotoxicity (ADCC) and complement-dependent cytotoxicity (CDC).

CD38, highly expressed in hematological malignancies including multiple myeloma (MM), represents a promising target for mAb-based immunotherapy. In this study, we describe the cytotoxic mechanisms of action of daratumumab, a novel, high-affinity, therapeutic human mAb against a unique CD38 epitope. Daratumumab induced potent Ab-dependent cellular cytotoxicity in CD38-expressing lymphoma- and MM-derived cell lines as well as in patient MM cells, both with autologous and allogeneic effector cells. Daratumumab stood out from other CD38 mAbs in its strong ability to induce complement-dependent cytotoxicity in patient MM cells. Importantly, daratumumab-induced Ab-dependent cellular cytotoxicity and complement-dependent cytotoxicity were not affected by the presence of bone marrow stromal cells, indicating that daratumumab can effectively kill MM tumor cells in a tumor-preserving bone marrow microenvironment. In vivo, daratumumab was highly active and interrupted xenograft tumor growth at low dosing.