The Oncology Drug Advisory Committee voted (informally) to recommend approval of Lilly’s necitumumab in combination with gemcitabine and cisplatin for the first-line treatment of patients with locally advanced or metastatic squamous non–small cell lung cancer (NSCLC).

Eli Lilly’s submission was supported by data from the Phase III SQUIRE trial of 1093 patients with late-stage squamous NSCLC who had received no prior therapy for metastatic disease. In the trial, patients who received necitumumab in combination with gemcitabine plus cisplatin exhibited a mean overall survival of 11.5 months, versus 9.9 months for patients who received gemcitabine and cisplatin alone. Nine percent of patients in the necitumumab arm experienced thromboembolic events, versus five percent in the standard chemotherapy group.

We have discussed the mechanisms of action on gemcitabine and cisplatin on this blog previously. We have also discussed EGFR signaling in the context of tyrosine kinase inhibitors and the T790 mutation. Two other anti-EGFR antibodies are approved – cetuximab (Erbitux) and panitumumab (Vectibix), are currently being used for the treatment of certain cancers. Cetuximab is approved by the U.S. Food and Drug Administration for the treatment of metastatic colorectal cancer and squamous cell cancer of the head and neck, and panitumumab is approved for the treatment of metastatic colorectal cancer, and was recently shown to extend survival. 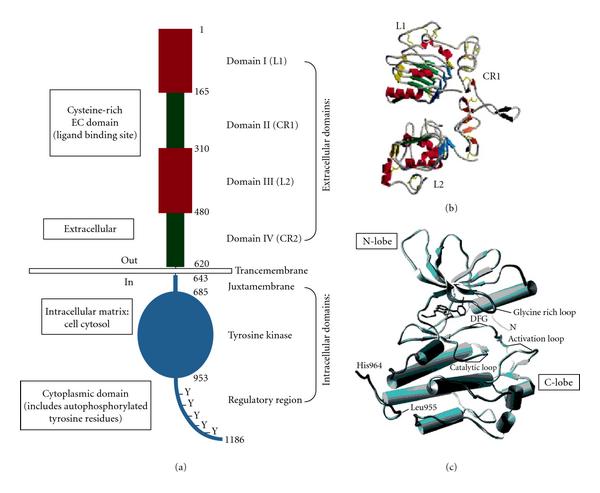 All three antibodies bind to domain 3, but they have different properties:

Although patients with EGFR-mutated tumors benefit from these treatments initially, their tumors eventually resist such targeted therapies through evolution and heterogeneity.

A novel antibody mixture, Sym004 (Symphogen) is in Phase II trials in colorectal cancer patients who have failed prior treatment with cetuximab or panitumumab. This treatment is a 1:1 mixture of two synergistic EGFR antibodies, which bind to different regions (epitopes) of the extracellular portion of EGFR but are administered in the same infusion bag. Unlike cetuximab and panitumumab, the double targeting of the receptor by Sym004 creates a heavy macro-complex that causes superior EGFR internalization and degradation.

Both Sym004 antibodies, called 992 and 1024, are mandatory in order to cross-link EGFR receptors on the cell surface, which leads to very effective receptor elimination and induction of secondary effector functions. Such extensive crosslinking of the receptors cannot be achieved with a single monoclonal antibody. Further, while single anti-EGFR mAbs have been demonstrated to activate ADCC through binding to FcγIIIa receptor, only antibody mixtures have been shown to activate CDC in vitro. 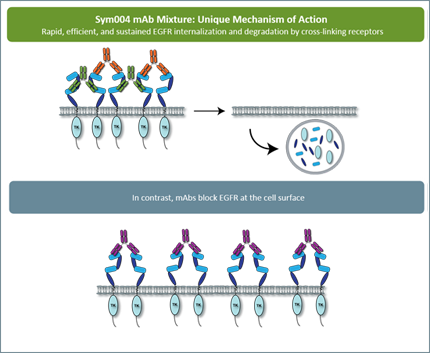 Another approach to overcome resistance has been to target EGFR (HER-1), as well as other HER-family receptors. MEHD7945A, is an anti-HER3/EGFR humanized IgG1 antibody being used in patients with advanced epithelial tumors. MEHD7945A has dual binding specificity to target both HER3 and EGFR. Each binding arm of the therapeutic attaches to unique epitopes of the receptors, thereby inhibiting the activity of multiple cancer signaling pathways. 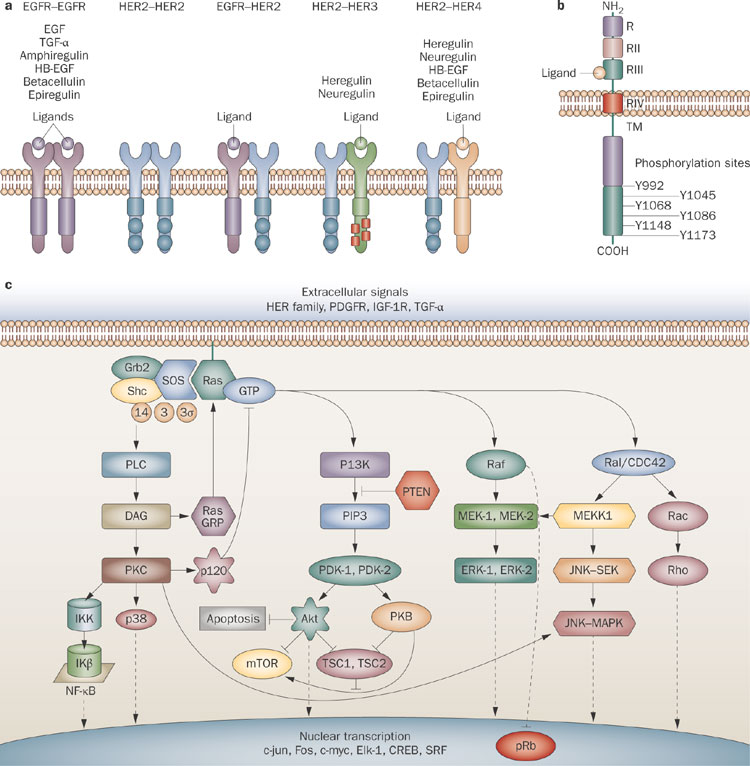 a | EGFR is a 170 kDa transmembrane protein of the HER family of receptors. Each receptor contains an extracellular ligand-binding domain, a transmembrane lipophilic domain and an intracellular tyrosine kinase domain and, except for HER3, relies upon heterodimerization for transphosphorylation. No ligand for HER2 has been identified. Ligand binding induces autophosphorylation and causes activation of downstream signaling pathways. Ligands are indicated by circles, PI3K binding sites are indicated by red squares. b | Diagram of EGFR protein. The extracellular domain of EGFR comprises 621 amino acids and consists of four different subunits, RI–RIV. RI is important in ligand-induced dimerization; RII and RIV are rich in cysteine residues. RIII includes the EGF-binding domain. The intracellular region contains the tyrosine kinase domain and the C-terminus, which has six autophosphorylation sites. c | The most widely known and best-characterized RAS signaling pathways include MAPK–ERK, the MAPK–JNK and p38 pathways. MAPK cascades are activated through a large variety of extracellular signals, including growth factors, differentiation factors and stress-induced factors. Abbreviations: HB-EGF, heparin-binding EGF-like growth factor; TM, transmembrane region. http://www.nature.com/nrclinonc/journal/v6/n6/fig_tab/nrclinonc.2009.62_F1.html

The investigators reported that MEHD7945A was well tolerated as a single agent, with confirmed partial responses in patients with squamous cell cancers of the head and neck who had refractory disease, “which clearly suggests that this dual-targeting approach is a good strategy moving forward,” according to principal investigator, Jose Baselga.

MEHD7945A is being tested in a phase II trial in patients with recurrent/metastatic squamous cell carcinoma of the head and neck.