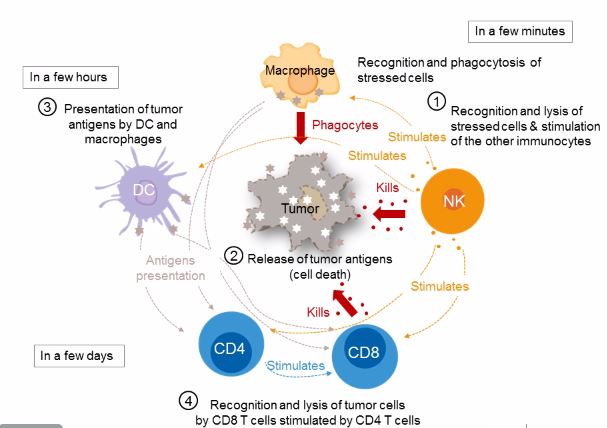 Innate Pharma is a French company with several products designed to enhance the activity of NK cells by targeting KIR and NKG2A (IPH2201) with monoclonal antibodies designed to neutralize these checkpoints (lirilumab for KIR2DL1,2,3 and IPH2201 for NKG2A) that abrogate cytotoxic immune responses.

Checkpoint inhibitors are quickly becoming the most intense area of focus in immuno-oncology with the approvals of Yervoy (ipilimumab, anti-CTLA4) and Opdivo (nivolumab) and Keytruda (pembrolizumab), both anti-PD1 (programmed death receptor-1) monoclonal antibodies. 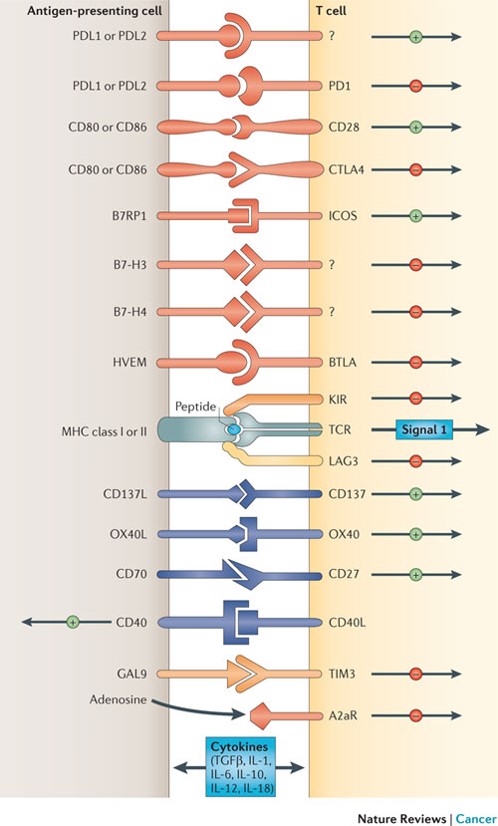 Depicted are various ligand–receptor interactions between T cells and antigen-presenting cells (APCs) that regulate the T cell response to antigen (which is mediated by peptide–major histocompatibility complex (MHC) molecule complexes that are recognized by the T cell receptor (TCR)). These responses can occur at the initiation of T cell responses in lymph nodes (where the major APCs are dendritic cells) or in peripheral tissues or tumours (where effector responses are regulated). In general, T cells do not respond to these ligand–receptor interactions unless they first recognize their cognate antigen through the TCR. Many of the ligands bind to multiple receptors, some of which deliver co-stimulatory signals and others deliver inhibitory signals. In general, pairs of co-stimulatory–inhibitory receptors that bind the same ligand or ligands — such as CD28 and cytotoxic T-lymphocyte-associated antigen 4 (CTLA4) — display distinct kinetics of expression with the co-stimulatory receptor expressed on naive and resting T cells, but the inhibitory receptor is commonly upregulated after T cell activation. One important family of membrane-bound ligands that bind both co-stimulatory and inhibitory receptors is the B7 family. All of the B7 family members and their known ligands belong to the immunoglobulin superfamily. Many of the receptors for more recently identified B7 family members have not yet been identified. Tumour necrosis factor (TNF) family members that bind to cognate TNF receptor family molecules represent a second family of regulatory ligand–receptor pairs. These receptors predominantly deliver co-stimulatory signals when engaged by their cognate ligands. Another major category of signals that regulate the activation of T cells comes from soluble cytokines in the microenviron-ment. Communication between T cells and APCs is bidirectional. In some cases, this occurs when ligands themselves signal to the APC. In other cases, activated T cells upregulate ligands, such as CD40L, that engage cognate receptors on APCs. A2aR, adenosine A2a receptor; B7RP1, B7-related protein 1; BTLA, B and T lymphocyte attenuator; GAL9, galectin 9; HVEM, herpesvirus entry mediator; ICOS, inducible T cell co-stimulator; IL, interleukin; KIR, killer cell immunoglobulin-like receptor; LAG3, lymphocyte activation gene 3; PD1, programmed cell death protein 1; PDL, PD1 ligand; TGFβ, transforming growth factor-β; TIM3, T cell membrane protein 3. http://www.nature.com/nrc/journal/v12/n4/fig_tab/nrc3239_F1.html

KIR stands for killer cell immunoglobulin-like receptor, the largest category of receptors expressed on natural killer cells. Upon binding of KIR to HLA, a signal is sent to the NK cell to either attack the cell or to tolerate it. Lirilumab blocks the interaction between KIR receptors and HLA molecules on cancer cells, thereby removing the inhibitory obstacle and allowing for the antitumor immune response to proceed, as dictated by the activating signals. The drug is partnered with BMS, which has other checkpoint inhibitors (Yervoy, ipilimumab – CTLA4, and Opdivo, nivolumab – PD-1) on the market. A randomized Phase 2 trial in AML (acute myelogenous leukemia) is underway, as are combination studies with ipilimumab and nivolumab. 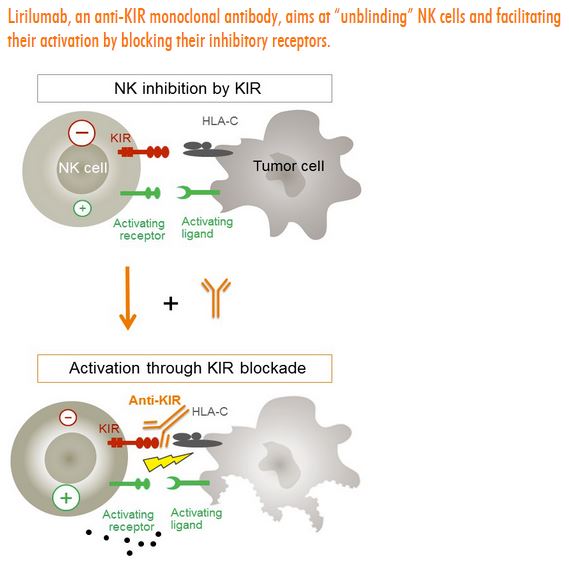