The Archives holds a number of pre-1800 monographs, one such work is C. Julius Solinus’ Polyhistor: Treasury of memorabilia from all over the world.
This edition (shown below) was published in Basel, Switzerland in 1538. 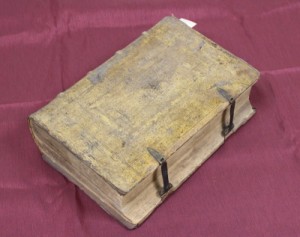 Solinus was a third century Latin scholar, who compiled a number of earlier ancient texts in his Polyhistor, including works from Pliny the Elder and the cartographer Pomponius Mela. Topics covered include the geography of the ancient world and a chronology of ancient Rome.

A number of newer maps are credited to Sebastian Munster (1489-1552). Shown below is a map of Asia, while obviously lacking in details (including Japan) the map does contain a small portion of North American visible in the upper right, labeled ‘terra incognita.’ This has been called one of the earliest maps to feature the west coast of North America. 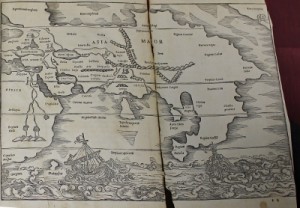 The same map also includes a number of ships and sea monsters along the bottom edge, in what would be the Indian Ocean. 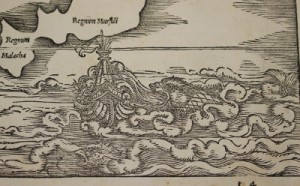 To learn more about map-making and the history of cartography please consult the library collection, including these works:

The marvel of maps : art, cartography and politics in Renaissance Italy

The power of projections : how maps reflect global politics and history