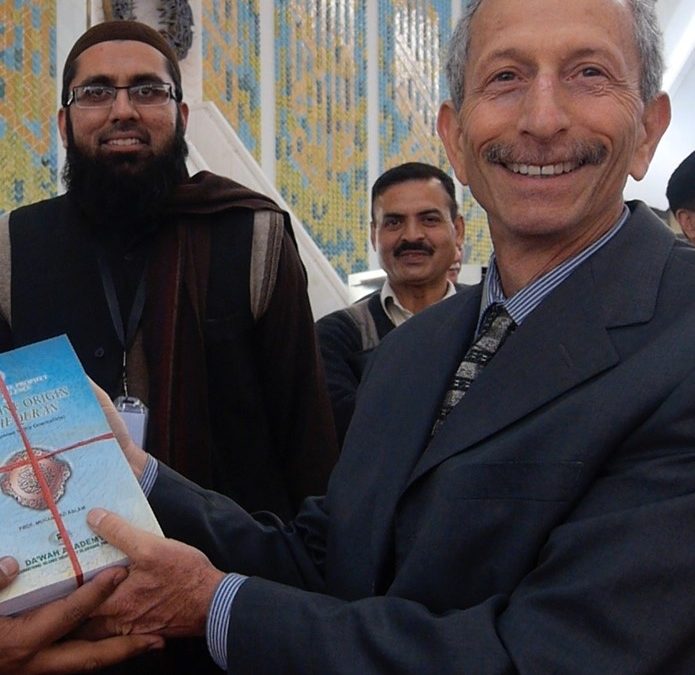 I arrived a bit late for the first presentation. There was no seat available, but as soon as I entered a traditional looking Muslim man got up and offered me his seat. I was bit embarrassed both at being late and at having been offered a seat by someone who clearly arrived on time. Yet welcomed so graciously, I sat down.

The presentation was in Arabic with an English synopsis provided on a screen. My Arabic is pretty good, so I followed most of what he said. The man sitting next to me, also traditional looking with long beard, noticed that I seemed to be following. He asked me in a whisper during the talk how I know Arabic. I whispered back. When he learned I was a rabbi he asked, “Do you study Talmud?” Of course I study Talmud. But I was more than a bit surprised. “Yes, I do,” I whispered. “What do you know about Talmud?” He answered, matter-of-factly, “I study Talmud too.”

“I study Talmud too”? Most non-Jews don’t even know what Talmud is! On the other hand, I thought amusingly, with a slightly different cut of clothes he would look like a very traditional Jew. But I was in Islamabad, not Brooklyn!

We talked after the presentation, and as our conversation progressed I discovered that he learned Talmud with a great Sufi Sheikh, a graduate of the traditional Muslim madrasa schools who, because he wanted to learn the scriptures of Jews and Christians, decided that he needed to study them in their original languages. He managed to get to Cambridge where he studied Hebrew, Aramaic and Greek. And there he also began his Talmud studies.

What a surprising introduction to Pakistan! Who would have thought that my first Pakistan experience would be like this? My preconceptions were being quickly dismantled. But that was only the beginning. I was invited to address a class of Muslim women from International Islamic University in Islamabad, since they had never had the opportunity to meet a Jew. All wore traditional clothing and hijabs. Many covered their faces as well. Their questions were insightful and respectful. After the session I was introduced to a few of the students, and here I also had a big surprise. One woman was writing her masters on Moses Mendelssohn, an 18th century German Jewish philosopher who was one of the most important thinkers to manage the balance between religious tradition and modernity. A traditional Muslim woman writing her MA thesis on the Jew, Moses Mendelssohn? One more biased presumption down the tubes.

I learned from this experience that Pakistan (like all countries!) is a very complex place. It embodies a complicated mix of tradition and modernity, east and west, and much much more. My visit has energized me to be ready to learn, to be open to challenge my assumptions. I have since been back to Pakistan a number of times through UPIC, and each one has continued to challenge me in new and amazing ways, and to energize me in my own university and seminary teaching. I can’t wait to be back again!