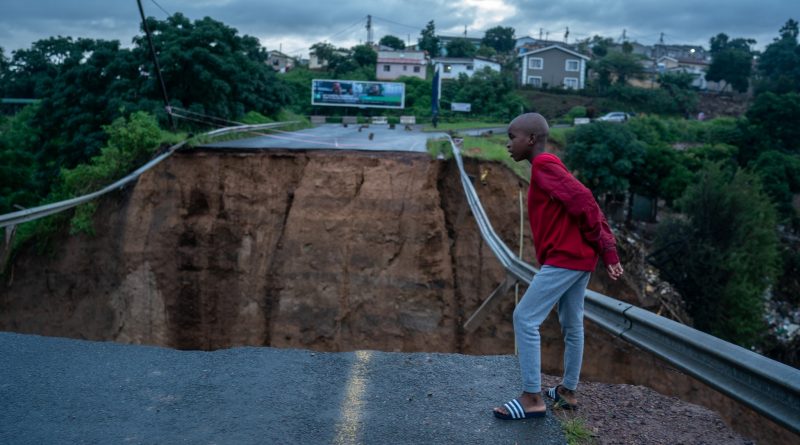 The devastation occurred in the country’s Kwazulu-Natal province around the east coast city of Durban, where the rainstorm led to unprecedented flooding and landslides, causing one of the worst natural disasters in South Africa’s recorded history. A confirmed 448 people have lost their lives and over 40,000 have been displaced from their homes, with many more people feared missing. Thousands of homes have been completely destroyed, with many more sustaining some level of damage. South African President Cyril Ramaphosa has declared a national state of disaster as the country shifts to recovery efforts. “Tonight, we are a nation united in our grief,” he said.

Large amounts of the area’s infrastructure and operations have been temporarily shut down or completely destroyed. The Port of Durban, one of the busiest on the entire African continent, has had limited to no access due to water and mudslides blocking the roads. A nearby shipping container warehouse was also flooded, causing dozens of containers to be carried away. Electricity and water treatment plants have also been damaged, as well as over 900 cell phone towers being down. Ramaphosa has said that the most important tasks for recovery are to provide food, water, and shelter to citizens, repair over 600 schools that have been damaged, and to get the Port of Durban back up to speed.

This storm came as part of a chain of storms that hit southeastern Africa over the first few months of this year alone, including three tropical cyclones. Experts and South African residents are pinning the blame of these storms on climate change. “It is telling us that climate change is serious, it is here,” Ramaphosa said. “We no longer can postpone what we need to do, and the measures we need to take to deal with climate change.” A study by the World Weather Attribution found that the areas hit by the cyclones, those being areas of Madagascar, Mozambique, and Malawi, are now at an “elevated risk” of climate change-related incidents. The South Africa storm saw the country get hit by up to a month’s worth of rainfall over a two-day period. While the Durban area has usual heavy rainfall this time of year, the city has been experiencing increased amounts of it that some are attributing to climate change.

The storm also posed a major problem for South Africa’s housing. Part of the reason why the storm caused so much damage is because of the large amounts of houses made of tin and other less stable materials placed in low-lying valleys and often close to a river or steep slope. Known in the area as informal settlements, they are created by citizens who cannot afford permanent housing, and in South Africa, this number reaches into the millions. This practice can be traced back to the country’s apartheid era, when the Black majority was pushed out to live in poorer areas and eventually struggled to find better housing in cities when the apartheid ended. While the government has taken steps to build free housing, it still hasn’t been enough to tackle the crisis.