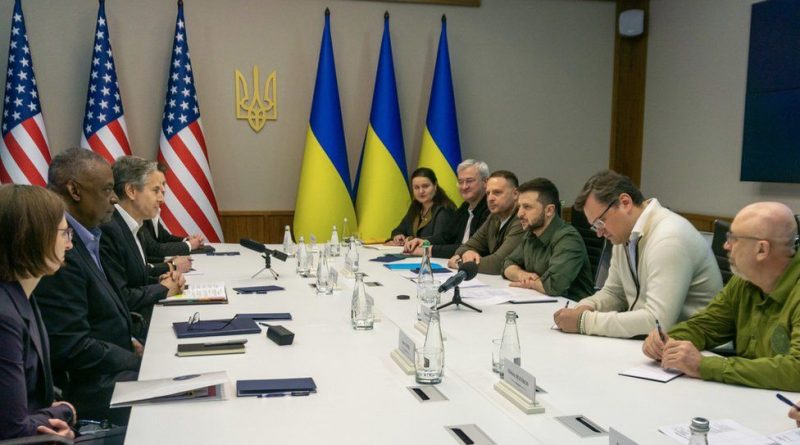 U.S. Secretary of State Antony Blinken and Secretary of Defense Lloyd Austin have traveled to Kyiv to meet with Ukrainian President Volodymyr Zelensky, according to Ukrainian officials and Zelensky himself.

This is the first visit to Ukraine by top U.S. diplomats since the fighting began in February. Although Zelensky eventually hopes to meet with President Biden, there is currently no plan for the two to meet. The visit with the two U.S. cabinet members comes in light of Zelensky’s pleas to Western countries for more weapons and assistance as the Russian forces continue to make further strides into Ukrainian territory. The Biden Administration has committed $3.4 billion to Ukraine so far, according to Pentagon Press Secretary John Kirby. Austin has announced that the U.S. will allocate $713 million in military aid to Ukraine and other European countries, and has also said that the U.S. wants to see Russia weakened “to the degree that it can’t do the kinds of things that it has done in invading Ukraine.”

As the invasion reaches the two-month mark, the Russians are still continuing their efforts. In a speech, Russian President Vladimir Putin accused Western countries of “destroying Russia from within” by “splitting Russian society,” which some are saying could be a response to Austin’s comment on a weakened Russia. The country has also warned the U.S. against sending more weapons to Ukraine, saying that this action would be “pouring oil on the flames.” Ukraine and other Western countries have seen a recent boost, and for the Kremlin a setback, with the re-election of French President Emmanuel Macron, whose opponent favored strengthening ties with Putin.

The Russians have recently re-launched its efforts to gain more advances in the eastern regions of Ukraine, including the key port city of Mariupol, which has been blockaded by the Russians for most of the invasion so far. The city is home to a steel plant that has been held and occupied by Ukrainian defenders and civilians as the Russians attempt to take it. Russian officials have agreed to open a humanitarian corridor to allow the trapped Ukrainians to leave, but Ukraine says that no agreement has been reached. Putin had ordered the soldiers not to storm the building, but instead to seal it. The situation has since been locked in an accusation game, with the Russians saying the Ukrainians used the civilians as human shields and the Ukrainians saying the Russians were deliberately targeting the civilians. Officials are now asking the United Nations secretary-general for assistance.

The fighting has also caused a rift in the Orthodox Christian church, with the Kremlin-supporting Russian Orthodox branch against Orthodox leaders in other countries. Orthodox Christianity is the third largest branch of the faith, behind Catholicism and Protestantism, and is the dominant religion in both Russia and Ukraine. There had been proposals for a potential ceasefire for Orthodox Easter, which was celebrated April 24, but to no avail. The head of the Russian Orthodox branch has even endorsed the war, as he is a close ally of Putin. This has drawn criticism from many other Orthodox leaders who are now urging him to reconsider who to support.