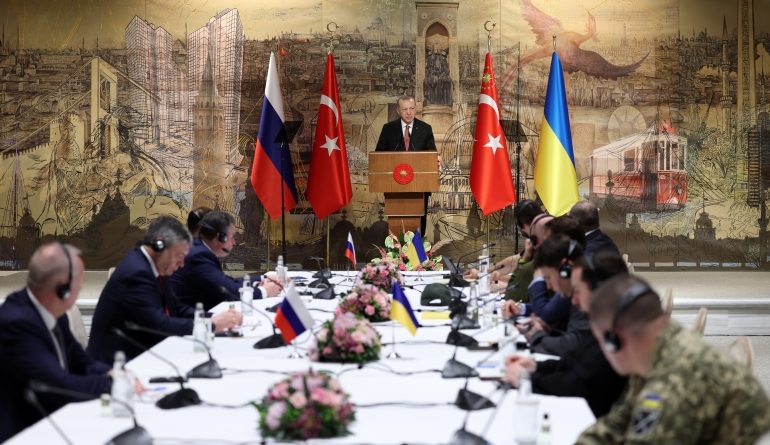 Russia has announced a significant move in the war with Ukraine during a set of key talks. Representatives and negotiators from both countries met in Istanbul on March 29 where it was announced that Russia will “fundamentally cut back” their military activities near the Ukrainian capital of Kyiv. This move, according to Russian Deputy Defense Minister Alexander Fomin, is meant to increase trust between the two countries as they try to work towards peace talks. The Ukrainian delegation had also stated that it would be willing to declare itself neutral and to have its security guaranteed by a number of different nations. One Ukrainian negotiator, David Arakhamia, said that a meeting between the Ukrainian and Russian presidents is still on the table, but “full peace” across Ukraine must be present in order to do so. Mevlut Cavusoglu, Foreign Minister of Turkey, praised these talks as “most significant progress” since the war started.

United States President Joe Biden has also met with Polish President Andrzej Duda to further discuss the situation with Ukraine and Poland’s role in it. The country has taken in just over two million Ukrainian refugees since the start of the fighting, the most of any country, and Biden wanted to reaffirm that the U.S. recognizes the burden and is still willing to lend help to Ukraine. “We do acknowledge that Poland is taking on significant responsibility,” he said. “I don’t think it should just be Poland. It should be the whole world, all of NATO’s responsibility.” Biden also met with U.S. troops and dozens of refugees while in Poland and even called Russian President Vladimir Putin a “butcher” when asked about Putin. In a speech, he also talked about how the “free world” needs to unite in order to resist the Russian forces. While the U.S. currently has no strategy for a potential regime change in Russia, according to Secretary of State Antony Blinken, Biden has stated that Putin “cannot remain in power.”

As for the fighting itself, new information from the Ukrainian military suggests that Russia is trying to split Ukraine into two separate regions. This reports comes after efforts from Russian forces to take the whole country at once seemed to lose momentum due to the Ukrainian resistance. Russian weaponry has also started to hit the city of Lviv in western Ukraine, which is home to a fuel station for Ukrainian forces as well as hundreds of refugees looking to flee the country. Ukrainian President Volodymyr Zelensky has called on the U.S. and other western countries to supply more planes, tanks, and other defenses in their efforts to push back the Russians.

There have also been reports that Putin is being mislead by his advisers on how the war is actually going. These reports, stemming from White House officials and British intelligence, say that the advisers are “too scared” to inform Putin of the Russian’s lack of progress, and that Russian soldiers are demoralized and refuse to carry out orders. The Kremlin has since fired back, saying the U.S. has a “total misunderstanding” of what is happening. “They simply don’t understand what’s happening in the Kremlin,” said Dmitry Peskov, Putin’s chief spokesperson. “Total misunderstanding leads to wrong decisions which have bad consequences.”