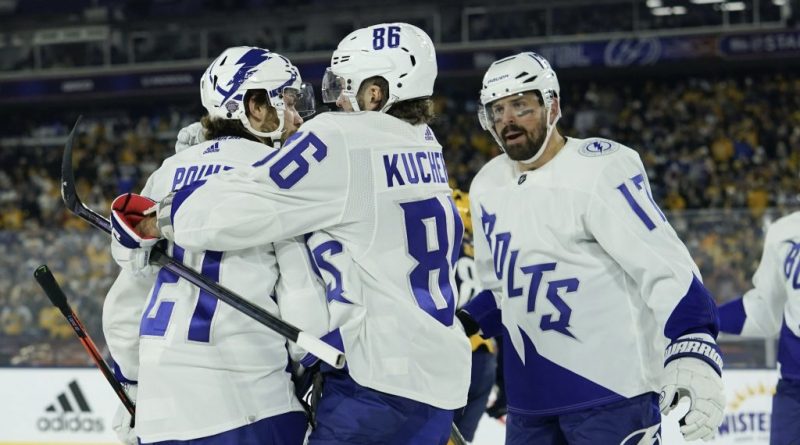 With over 68,000 fans in attendance at the Nissan Center in Nashville, Tennessee, the Tampa Bay Lightning defeated the Nashville Predators 3-2 at the home of the NFL’s Tennessee Titans on February 26. In a competitive game until the final horn, Tampa Bay extended their winning streak to four games, while Nashville lost the fifth out of their last seven games. This is the very first time that either team has participated in the annual Stadium Series game and was Nashville’s second outdoor regular season game since the NHL started doing outdoor games in 2003. The first time for the Predators didn’t go so well for them either, which was a 4-2 loss to the Dallas Stars in the 2020 Winter Classic on New Year’s Day 2021.

The Predators finished the first period up 1-0, with Tanner Jeannot receiving the rebound off a save from Lightning goalie Andrei Vasilevskiy and putting the puck in the net with the second opportunity. The Lightning responded big in the second half, with winger Nikita Kucherov setting up teammate Brayden Point for a goal just a minute into the second period, and later scoring a goal of his own 6:18 into that same period. With the Lightning up 2-1 after the second period, Tampa Bay added to their lead, with captain Steven Stamkos scoring a one-time goal to give the Lightning a 3-1 lead. Nashville, not deterred by the goal, responded just a minute after, with forward Filip Forsberg cutting the deficit back to one. Unfortunately for Nashville, they couldn’t get a second goal through the net, despite going with an empty net for the final seconds of the game.

Fans of all teams have had nothing but nice things to say about the game, praising the competitiveness, and fans who got the luxury of being there and enjoying the experience. This is a very good thing for the series, with some of the games not living up to the hype these outdoor games usually come with, and some games not being as competitive as others. The most notable of these cases came in the 2014 and 2016 incarnations, when the New York Rangers beat the New Jersey Devils 7-3, and when the Minnesota Wild beat the Chicago Blackhawks 6-1.

As it stands right now, the Lightning are second in the Atlantic division, while the Predators are third in the Central division. Both teams seem primed for playoff spots, with the Lightning looking to win their third consecutive Stanley Cup championship, while the Predators are hoping to do better than last year, when they got bounced in the first round by the Carolina Hurricanes.