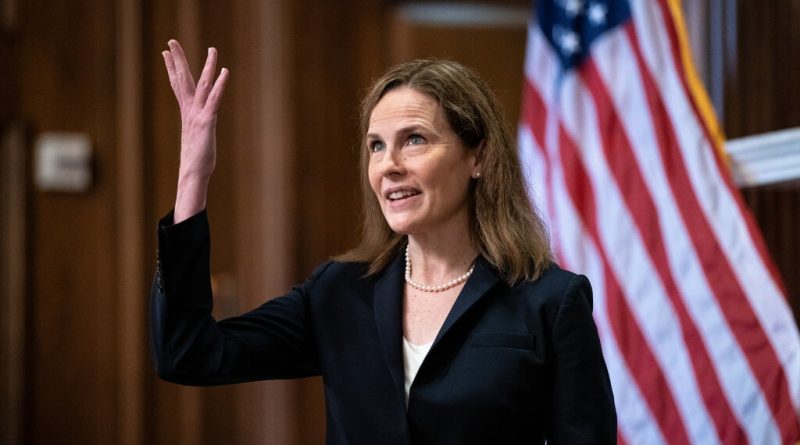 The three daylong hearing consisted of Both sides of the aisle either praising, questioning, or pressuring Judge Barret to answer questions regarding precedent as well as previous court decisions.  The hearing was a three-day opportunity for the Judge to present herself as a qualified justice for the Supreme Court. Barrett emphasized that she is an individual of her own making, contrary to what the Democratic side believes and that she will not let anyone or anything besides the constitution of the United States rule her future decisions.

Her judicial philosophy can be summarized in the statement she gave during the hearing, “It was the content of Justice Scalia’s law that shaped me. His judicial philosophy was straightforward: A judge must apply the law as it is written not as she wishes it were. Courts are not designed to solve every problem or right every wrong in our public life. The policy decisions and value judgments of government must be made by the political branches, elected by and accountable to the people.”

On the Affordable Care Act

Democrat Senator Sheldon Whitehouse of Rhode Island began the discussion by stating that the “big secretive influences behind this unseemly rush see this nominee as a judicial torpedo they are firing against the ACA.”

Democrat Senator Mazie Hirono of Hawaii, similarly, also stated that “the consequences of judge Barrett’s conformation would be devastating for millions of Americans who would lose their healthcare during the pandemic.”

However, Judge Barrett refused to give her opinion regarding the matter, considering that it is a matter of public debate and hence she cannot present a siding opinion on the matter.

Republican Senator John Cornyn for Texas defended her by saying, “You stand accused of intending to violate your oath before you even take it. Further, our democratic colleagues want you to guarantee a result in a case as a quid pro quo for your confirmation. It’s outrageous.”

This extended conversation regarding the ACA reflects how the majority of the three-day hearing was.

Democratic Senator Harris of California asked judge Barrett if she believed climate change was real. Barrett said that she will not be responding to that question because it is a very continuous matter of debate.

After refusing to fully answer Harris’s question regarding climate change, Harris asks Barrett a series of simple scientific questions: whether cigarettes cause cancer, whether COVID-19 is infectious. Judge Barrett accused senator Harris of trying to agonize that eliciting an opinion from her that is on a very continuous matter of public debate.

“I will not do that,” Judge Barret said. “I will not express a view on a matter of public policy, especially one that is politically controversial because that’s inconsistent with the judicial role.”

Mrs. Feinstein started the discussion regarding the case by stating, “During her hearing, Ruth Bader Ginsburg was asked questions about her views on whether the constitution protects a woman’s rights to abortion. She unequivocally confirmed her view that the constitution protects a woman’s rights to abortion…In Planned Parenthood v Casey, Justice Scalia, as was said earlier, joined the dissent, which took the position ‘we believe that Roe was wrongly decided and can and should be overruled.’ Do you agree with his view that Roe was wrongly decided?”

Barrett promptly responded, similarly to how she previously responded to any questions that pose public debate,” if I express a view on a precedent one way or another whether I say I love it or hate it, it signals to litigants that I might tilt one way or the other in a pending case.”

Mrs. Feinstein responded by saying it is distressing on behave of all women that she is unable to give a straightforward answer.

Judge Barret under federal laws it illegal to intimidate voters at the polls? – Klobuchar

Senator Klobuchar of Minnesota, asked the judge a point-blank question of if, “Under federal laws, it is illegal to intimidate voters at the polls?”

Similarly, to how she answered almost all questions in the hearing, Barrett states, “I cannot characterize the facts in a hypothetical situation, and I can’t apply the law to a hypothetical set of facts. I can only decide cases as they come to me litigated by parties on a full record after fully engaging precedent, talking to colleagues, writing an opinion and so I can’t answer questions like that.

Klobuchar responded by saying, “Well I’ll make it easier. 18USC594 outlaws anyone who intimates, threatens, coerces, or attempts to intimidate, threaten, or coerce any other person for the purpose of interfering with the right of such other person to vote.”

This response paired with Barrett’s inability to name the five freedoms within the first amendment led to a lot of raised eyebrows on how qualified Barrett truly is for this position.