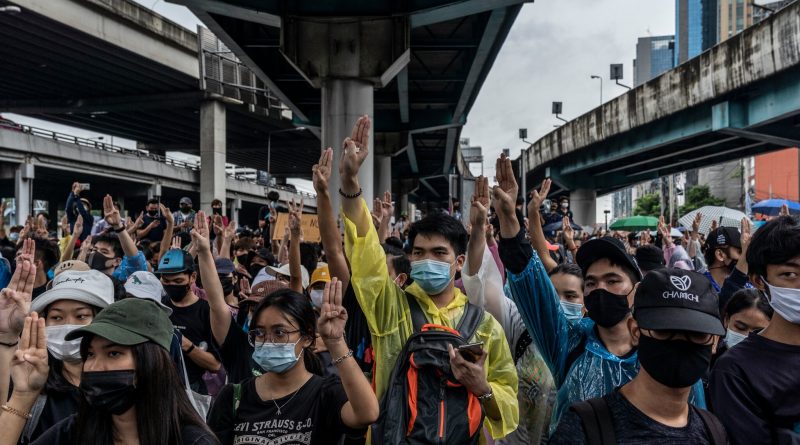 Thailand has witnessed widespread protests since March, as citizens have demanded the Prime Minister step down, and have argued that the country is in desperate need of democratic reform. Prime Minister Prayuth Chan-ocha rose to power in 2014 through a military coup. In 2017 the constitution was rewritten by military officials. The changes replaced many parliament seats with military representatives. The protestors have argued that this change has rigged elections so that Chan-ocha will never lose. The Future Forward Party, which was pro-democracy and the biggest opposition to the Prime Minister, had also been disbanded in February. This added more fuel to the growing demonstrations.

Some student protestors have been questioning the divine legitimacy of the king, who spends most of the year in his private estate in Germany. This is highly controversial as the royal family’s divinity has never been questioned publicly before because there are laws against defaming, insulting, or threatening the family. Two protestors were even arrested and charged with an act of violence against the queen’s liberty, for yelling near the Queen’s motorcade. Eighty-seven protestors have been arrested since protests started according to Thai Lawyers for Human Rights. Eighty-one of those arrested have already been prosecuted.

Viewed as threatening to the Prime Minister’s power, mass gatherings were banned on September 15th. This did little to deter the protestors, as thousands still gathered in Bangkok the day of the emergency announcement. The protestors have copied many tactics used by the Hong Kong protestors. They equip themselves with riot gear so that they can push through police. The police have sprayed water canons on protestors, and like the Hongkongers, they bring umbrellas to protect themselves. In their resistance to increased influence from Beijing, Hong Kong protestors started to use hand signals to alert when helmets are needed, someone has been injured, or if orders to disperse were given. This has been adopted by Thailand protestors, which helps to bring crowds together and keep themselves organized, factors made critically important because these have been leaderless demonstrations.

On October 21st, protestors handed a piece of paper to the Bangkok chief of police. It is a resignation letter that has a space for the Prime Minister to sign. The state of emergency was lifted on October 22nd, so protestors are now legally allowed to gather. They have given Chan-ocha three days to resign otherwise he will face more rallies. He had said previously that he will not resign. He also called for protestors to work through parliament instead of demonstrating, which would be impossible because of the military’s hold on parliament.

It is evident how young these political activists are by their inspiration, notably the book The Hunger Games. When the coup took over the government Thailand in 2014, protestors used the three-finger salute that the main character in the book used. The new government tried to ban this symbol, but this may have only emboldened protestors, as the gesture is now seen as a universal expression of dissent against the government. The salute has continued into current protests. With the government standing firm, and protestors unlikely to go home quietly, the stage is set for further unrest, and uncertainty regarding whether these events will lead to a bloody crackdown or a democratic revolution.