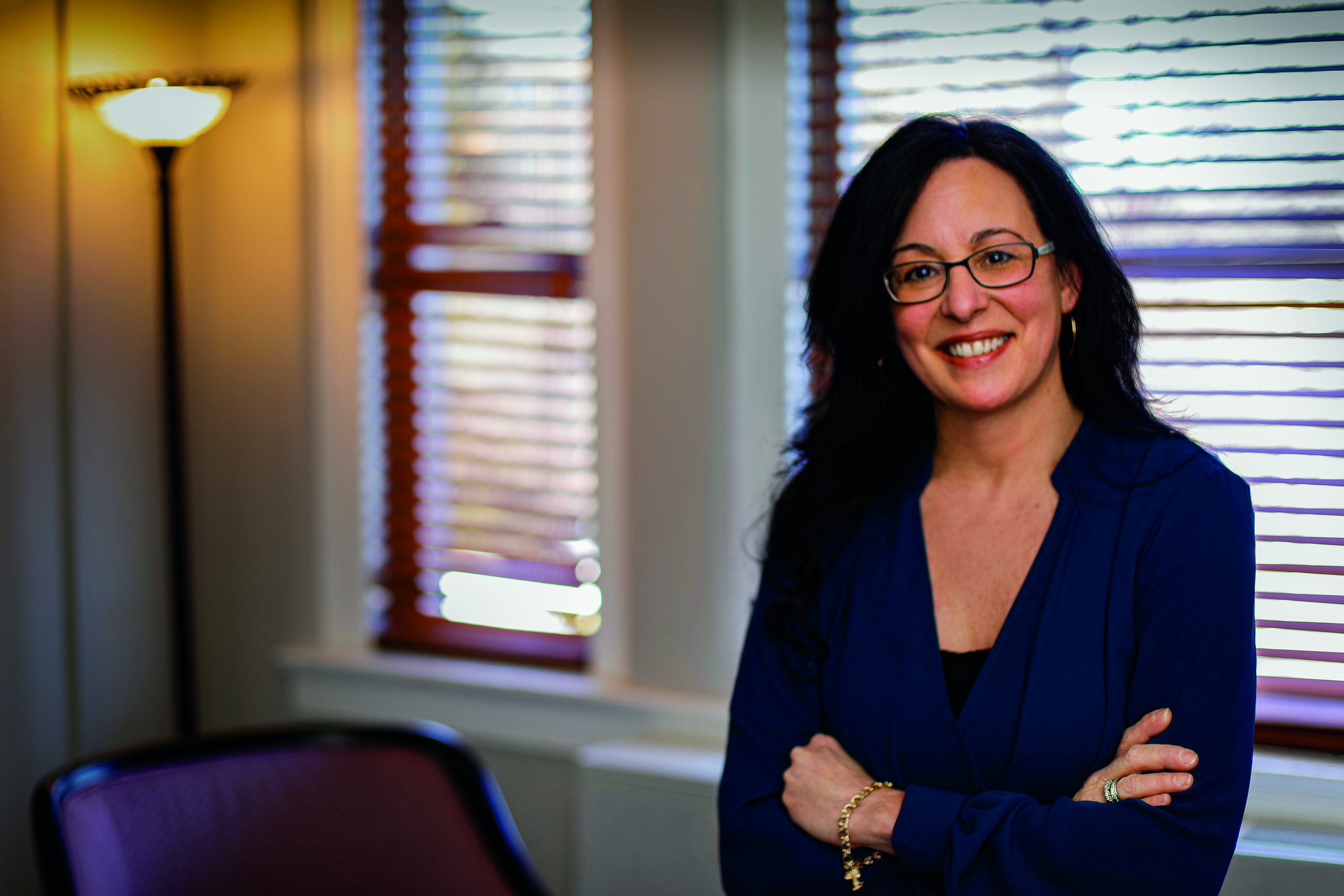 Taylor Russell ’22 has watched many of her friends wrestle with serious mental health
issues. One would send her texts in the middle of the night, confessing that she was about
to inflict self-harm again. Others have shared their battles with depression, suffered serious traumas and developed tics from their anxiety. A close family friend died by suicide.

“College life can be stressful, especially right now,” says Russell, a psychology major and president of the student mental health group Active Minds. “We’re all under a lot of pressure to succeed, get good grades, be involved, make connections — everything. And that pressure isn’t just from other people. It’s also from ourselves.” 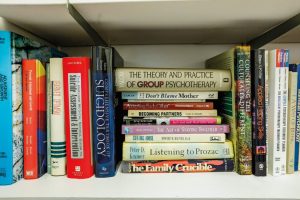 Alarm over college students’ mental health has mounted in the last decade as rates of anxiety, depression and death by suicide on campuses keep climbing. “Some definitely call it a crisis, an epidemic,” says Dianne Aguero-Trotter, the director of Seton Hall’s Counseling and Psychological Services (CAPS). “I don’t know what term I would use, but we are clearly seeing numbers that have been rising — although the factors behind it are complex.”

Seton Hall has been ramping up its support, with CAPS now offering more individual counseling, group therapy options and public programs than ever before. Three years ago, the University pledged to become a Stigma-Free Campus — referring to the stigma around mental health issues — through the Codey Fund for Mental Health. Now 2021 marks an important advance: a University-wide Great Minds Dare to Care initiative, propelled by $250,000 from the state’s Division of Mental Health and Addiction Services.

“I’m so excited and happy to hear about this program at Seton Hall,” says Meredith Masin Blount, executive director of the National Alliance on Mental Illness – New Jersey. “It is so important that an entire campus adopt an approach to mental health and mental illness awareness.”

And as the data makes clear: this is the time for it.

Almost one in five adults in the U.S. is living with a mental illness, but among young adults, it’s closer to one in three.

The numbers weren’t always this high. Just 13 years ago, in 2008, 6.1 million 18-to-25-year-olds reported that they had a mental illness. By 2019, that number had grown to 9.9 million, according to a report from the Substance Abuse and Mental Health Services Administration.

SAMHSA data also shows that more young adults are having serious suicidal thoughts: up from 6.8 percent in 2008 to 11.8 percent in 2019. Among college-aged Americans, suicide is now the second-leading cause of death, and depression and anxiety are soaring. A 2019 report by the American College Health Association found that two-thirds of students had experienced “overwhelming anxiety” sometime in the past year, and 45 percent had felt “so depressed that it was difficult to function.”

“We’ve been seeing an increase in the need [for mental health services] across the board, but specifically with college students,” NAMI’s Blount says. “Eighteen-to-25 is such a key age group for so many reasons: they’re moving into adulthood, going on to college — and it’s also the time when serious mental illness tends to present itself.” In fact, 75 percent of all mental illnesses develop by age 24, according to data gathered by NAMI.

At Seton Hall’s Counseling and Psychological Services, the number of students seeking new appointments has risen 35 percent in the last five years, outpacing enrollment increases. The numbers are similar at campuses around the country. And in another echo of national data, more CAPS clients at Seton Hall have reported self-injury, serious suicidal thoughts and past suicide attempts, Aguero-Trotter says. Over a third of these CAPS clients say they’ve thought about ending their lives.

There’s no single reason for the steep rise in mental health issues among college students. Some say it’s because the stigma around mental health is finally fading, which means people feel less ashamed to seek help. Others credit the widening awareness of mental health issues and their warning signs, with schools now starting conversations as early as the elementary years and celebrities publicly acknowledging their struggles.

“Before, people may have suffered in silence,” Blount says. “Now you have athletes and rock stars and actors and politicians coming out and sharing their own histories of living with a mental illness. It makes other people say, if they can do that, then maybe I can look for help, too.”

There are also more troubling explanations. From academics to sports to Instagram-worthy social lives, “there’s increased pressure on children to perform at higher and higher levels, from elementary school all the way up to grad school,” Blount says.

And the past year certainly hasn’t helped. The COVID-19 pandemic has dropped grief, isolation, fear and stress onto college students, many of whom are already struggling with their mental health. “We are all going through this,” Aguero-Trotter says, “but in this particular age group, it can really exacerbate any pre-existing anxiety and depression.”

Lockdowns, loneliness and physical distancing are tough on everyone, but Aguero-Trotter says they’re especially hard on young adults. “We all need social connections, but they’re at a place in their lives where it’s critical to their development,” she says. “The pandemic adds a new level of stress to students’ lives.”

How Seton Hall Will Dare to Care

Though the Dare to Care initiative marks a focused and timely commitment, the University has been supporting students with anxiety, depression and other mental health issues since it launched counseling resources in the late 1950s.

Hoping to reach the entire University community, Seton Hall became one of nine college campuses and 32 towns in New Jersey designated “stigma-free” by the Codey Fund for Mental Health in 2018. The new $250,000 Great Minds Dare to Care initiative expands on that, with funds that former New Jersey Gov. Richard Codey — a state senator representing Seton Hall’s district, as well as the Codey Fund’s creator — helped the University secure.

Aguero-Trotter says the new program aims to make everyone at Seton Hall aware of mental health issues and suicide prevention. “We know that approximately 80 percent of the college students who die by suicide have not accessed counseling,” she says, “which is why a comprehensive prevention program has to include everyone.”

Plans include suicide prevention training for students, faculty and staff; a 24/7 hotline through an outside behavioral health service; and a monitored peer-to-peer support program. An on-campus wellness room, a traveling exhibit focused on the many young lives lost to suicide, and bystander intervention training for sexual assault are all on the list, too.

Blount says a University-wide program like Dare to Care is key to fighting stigma and reaching more people. “Having a campus mental health center is a great first step,” she notes, “but [awareness] needs to be woven throughout the campus, so students and professors and staff are all aware of the services and warning signs both for themselves and others.”

Long before he helped Seton Hall secure $250,000 to fund Dare to Care, before he was governor of New Jersey, and before he had established the Codey Fund for Mental Health, Richard Codey was fighting hard against mental illness.

He’s been focused on it since he was elected to the state Senate in 1982, although mental health took on deeper meaning for him two years later, when his wife Mary Jo gave birth to the couple’s first son. She suffered from debilitating postpartum depression that required hospitalization, but at the time, this was something few people talked about or even fully understood.

As soon as he became governor in 2004, Codey established a Governor’s Task Force on Mental Health. He also created a postpartum wellness initiative, and Mary Jo began to share her story publicly. “That was a sea change for our state,” Codey says now. By 2006, he’d helped New Jersey become the first state to require postpartum depression screenings for all new moms. He also signed a law that allocated $200 million to housing for people with mental illnesses.

Today there are multiple mental health-related bills on the table in New Jersey, many of them with Codey as a primary sponsor. One would require the state’s health offices to seek federal funding for maternal mental health support. Another establishes a task force to examine public school programs on student mental health. Codey also sponsored legislation that Gov. Phil Murphy signed into law in 2019, requiring schools to weave mental health instruction into grades K-12.

Codey says legislation focused on mental health is “an acknowledgment by the people of the state of New Jersey — through their elected representatives — that this is a serious subject, we need to address it, and we need to help our citizens on this particular issue, which for too long had a stigma attached to it.”

“It’s very encouraging to see,” Blount says. “If people feel strongly about mental health, they should absolutely reach out to their local legislator and say, ‘Mental health is important to me.’”

But even as promising new bills continue to emerge, Aguero-Trotter is already thinking ahead to the extra support that college students will require post-pandemic. “This has been a year of chronic trauma,” she says, “and often once the stressor is relieved or minimized, we then begin to recognize the full, long-term impact of our experience.”

“A lot of people I’ve come in contact with do need help,” Russell says of her fellow students. That’s why she’s excited to see Dare to Care spread resources and spark conversations across Seton Hall’s community. “I’m really glad that they’re creating something like this,” she adds. “It’s sad to say, but it’s very common in this world for mental health issues to go unknown in a lot of people.”

Getting to Know You