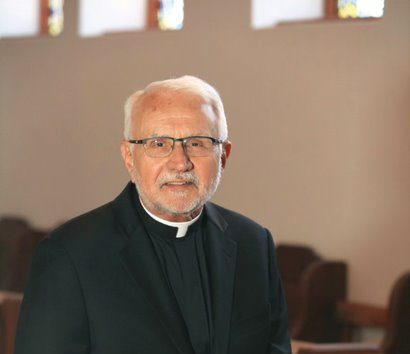 And the Emmy Goes to…

Only a handful of Roman Catholic priests have won Emmys, and this summer Father Michael Russo ‘67/M.Div.’75 became one of them.

Father Russo, managing editor and host of the “Sunday to Sunday” television show, was awarded a 2020 Emmy Award for Outstanding Interview Program by the National Academy of Television Arts and Sciences’ San Francisco/Northern California chapter.

“We’re thrilled about this honor from the television academy,” Father Russo told the Religion News Service. “It’s truly a culmination of teamwork and support from many, and a sign that our work is having an impact.”

Father Russo, retired professor of media studies at Saint Mary’s College of California, has combined media expertise with his religious calling throughout his career. His broad experience includes working as a desk assistant for Walter Cronkite during the broadcast of the Apollo 11 moon landing in 1969 and serving as a freelance CBS News producer for elections, political conventions and his specialty, the news of religion.

He spent 10 years in the Seton Hall priest community, teaching at Seton Hall Prep and serving in other capacities at the University. After his ordination from Darlington Seminary in 1971, he obtained a Ph.D. from New York University and earned a Shorenstein fellowship at the Harvard Kennedy School.

As the Archdiocese of Newark’s director of communication, he created “New Jersey Catholic,” a weekly discussion program on Suburban Cablevision and was appointed to the New Jersey Public Television Commission.

After retiring from full-time teaching in 2017, Father Russo established “Sunday to Sunday,” which explores the art, craft and spirituality of preaching. The program can be seen on America Magazine’s website and a growing number of cable news outlets nationally.

The Emmy Award-winning episode, “Father Chris Walsh,” follows a Philadelphia priest as he shares his experiences as the spiritual leader of the African American congregation of Saint Raymond of Penafort.

“I think as we minister, not only to an increasingly non-white Church but also a Church that has very different experiences as far as socio-economics and political experiences, what the Church has done when it’s been its best throughout history is to meet people where they are, understand their needs, and then preach the Gospel to them,” says Father Walsh in the episode.

Other recent episodes feature Father Bob Stagg of the Church of the Presentation in Upper Saddle River, N.J.; Father Manuel De Jesus Rodriguez, pastor of Presentation of the Blessed Virgin Mary Church in Jamaica, Queens; and Father Ricky Manalo, a composer/liturgist and preacher.