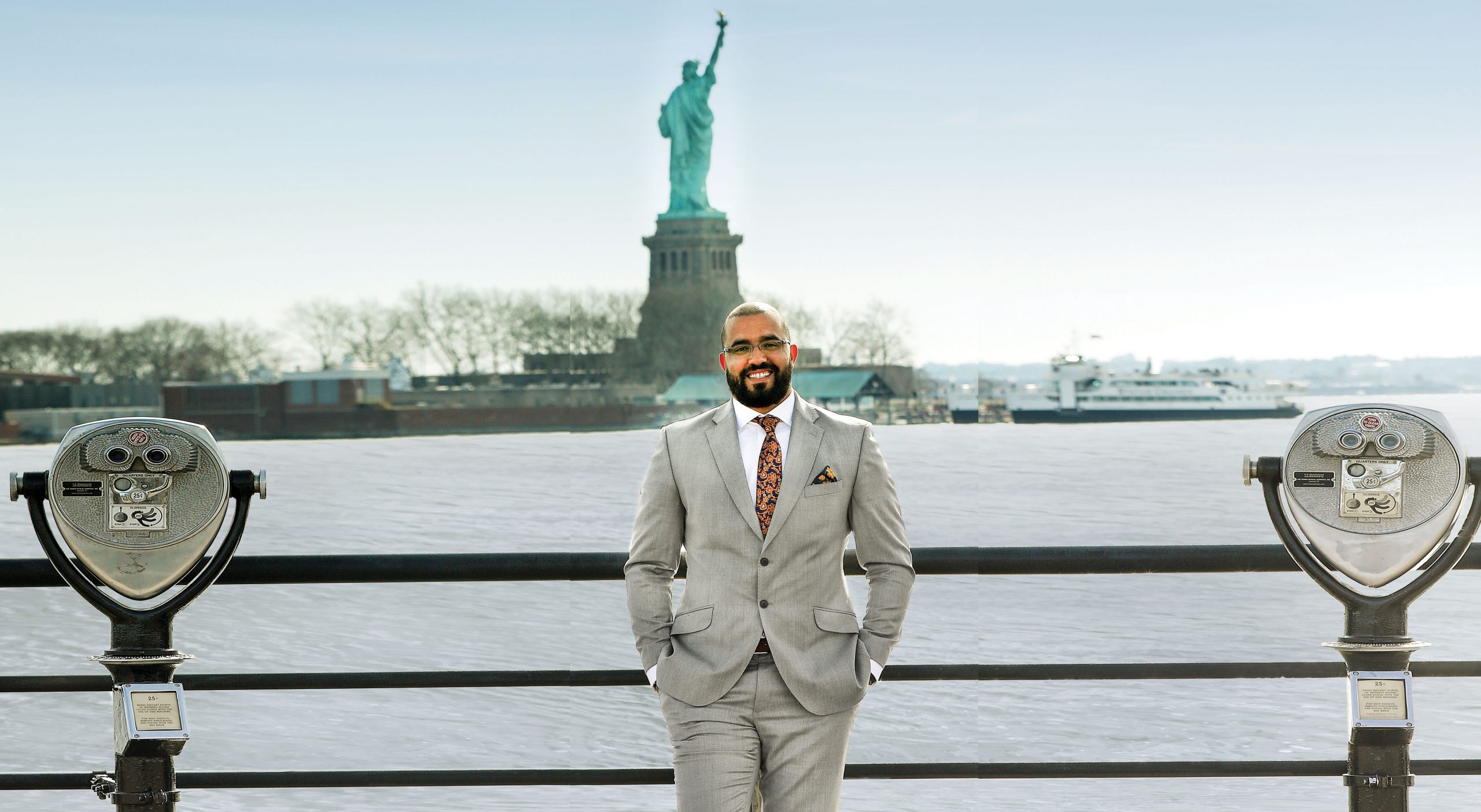 Published April 20, 2020
Houssam Eddine Beggas left a broadcast career in Algeria to study at Seton Hall and deepen his understanding of international affairs.

The serpentine path Houssam Eddine Beggas traveled to get to Seton Hall’s School of Diplomacy and International Relations began in 2011 when as a college senior in his native Algeria, he watched with wonder as a sweep of countries across Northern Africa and the Middle East convulsed into conflict wrought by the anti-government movement known as the Arab Spring.

After graduating with a degree in translation and interpretation (in Arabic, French and English), Beggas began his professional career as a translator. But he wanted to become a journalist. He enrolled in a master’s program in journalism, where a mentor suggested he’d be well suited to political reporting. Beggas agreed. The Arab Spring, its impact still unspooling across the region, had captured his attention, and he remained intensely interested in the affairs of state. “How could you not be?” he muses. “Politics was always around.”

And so Beggas became a daily news anchor on Algerian national television, where he created and hosted two politically minded shows. On “Pulse of the World,” he discussed international affairs with on-air guests. On “At Home with an Ambassador,” he interviewed diplomats about the state of relations between their countries and Algeria.

Still, Beggas wanted to sharpen his understanding of international affairs. “I needed to have a better grasp of politics,” he says, “a better grasp of how deals are made.” His wish to enroll in a graduate program in international relations was granted when he won a Fulbright Scholarship, which covered his expenses. He entered North Carolina State University but found himself seeking a stronger emphasis on Middle East Studies, and that’s where his path turned to Seton Hall.

Beggas was impressed by the scope of the University’s curriculum, the potential to engage with the student community, and the friendly nature of the campus. With help from his academic adviser, Daniel Kristo, assistant dean for graduate enrollment management at the School of Diplomacy and International Relations, Beggas enrolled, resettled in South Orange, and dove in.

The school paired Beggas with Professor David Wood to conduct mediation and peacebuilding research in the Middle Eastern and North African region. And Beggas took part in the school’s annual fall conference, “All Conflict is Local: Personal Experience, Reflection, and Conflict Resolution,” offering his perspective on the Algerian Civil War, which unfolded during his childhood and cost as many as 200,000 lives. He also joined the Journal of Diplomacy staff as an associate editor, recently analyzing the prospects for democratic reform under Algerian President Abdelmadjid Tebboune.

Beggas, who is specializing in international security and Middle East and North Africa studies, has embraced the diversity of Seton Hall’s student body and the world of perspectives it has afforded him. “What I love about Seton Hall is the exposure to outside institutions,” he says. “Being close to New York opens a lot of doors in matters of international relations and diplomacy work.”

Kristo says he’s been especially impressed by Beggas’ ability to adapt quickly to his new environs. “It’s been a great match for Houssam to be fully immersed in the diplomacy program, to create a niche profile through his specialized research and extracurricular engagements,” Kristo says. “It’s a good example of what the Fulbright program is all about — creating a mutually enriching experience, both for us, as a host institution, and for students to take back to their home country.”

Beggas is scheduled to complete his master’s program later this year, after which he plans to return to Algeria and resume his career as a political journalist — but with a twist. Inspired by the politically oriented comedy of Jon Stewart, Stephen Colbert and Trevor Noah, he wants to inject humor into his work.

“Comedy makes hard truths easier to absorb, you know?” he says. “We have a strong tradition of humor in news in Algeria, through our comic artists whose drawings give the snapshot of the news in really hard-hitting ways. I want to build on that by looking at ways to bring humor onscreen, drawing from examples around the region and the United States.”

A Different Kind of Service