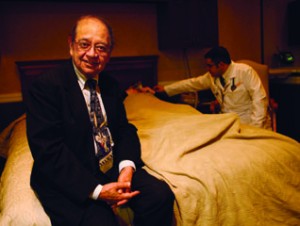 The work of Dr. Sudhansu Chokroverty, a professor of neuroscience in the School of Health and Medical Sciences, sheds light on the mysterious mechanisms of sleep.

Little was known about the science of sleep during the 19th century when Fyodor Dostoyevsky worked until dawn writing Crime and Punishment. Dostoyevsky’s seizures were recognized during his lifetime, but the sleep disorder that may have complicated his epilepsy went undiagnosed until more than a century after his death.

Then, in 1997, the sleep expert Dr. Sudhansu Chokroverty led a delegation of physicians to Russia on a cultural exchange to St. Petersburg.

During a tour of Dostoyevsky’s home, an interpreter described the author’s unusual habit of doing most of his writing at night, often not going to sleep until 4 or 5 a.m. The detail caught the attention of Chokroverty, a professor of neuroscience in the School of Health and Medical Sciences and program director of the Clinical Neurophysiology and Sleep Medicine Residency Program at the New Jersey Neuroscience Institute in Edison, N.J.

“I got interested: Why did he write during the night?” Chokroverty recalls. “I got the clear idea that this patient — Dostoyevsky — had delayed sleep-phase syndrome,” a circadian rhythm disorder in which the normal sleep period is shifted, so that patients can’t fall asleep until hours after midnight and have difficulty waking before midday.

An examination of the biographical literature provided support for the diagnosis, and Chokroverty published a review of the case in Sleep Medicine, the journal he founded in 2000 as a resource to educate physicians about the latest developments in the emerging field of sleep science.

Chokroverty is an internationally respected authority in sleep medicine and an expert in restless legs syndrome. He has written for hundreds of scholarly publications on subjects across the field of sleep studies, from parasomnias and movement disorders to the links between neurological disease and sleep. But the legacy he is building is that of an educator. “People are getting more knowledgeable now, but for hundreds of years — until the last 15 years or so — we talked about what happens during the daytime and totally ignored the nighttime,” he explains. “And there is still a great ignorance around sleep.”

He has therefore dedicated much of his nearly 50-year career as a neurologist to illuminating sleep’s mysteries. “He was one of the pioneers in bringing sleep medicine into the forefront of neurology and recognized the interconnection of sleep with virtually every aspect of neurology — from stroke, to epilepsy, to neuromuscular diseases,” says neurologist Beth Malow, medical director of the Vanderbilt Sleep Disorders Center at Vanderbilt University Medical Center.

After founding Sleep Medicine, Chokroverty went on to establish the World Association of Sleep Medicine, an organization of healthcare professionals supporting sleep research and promoting the prevention and treatment of sleep disorders. He has also written two books for the general public, 100 Questions and Answers About Sleep and Sleep Disorders and the forthcoming 100 Questions and Answers About Restless Legs Syndrome.

Does sleep really need an advocate? It seems such a simple phenomenon: Just lie down in the dark at the end of the day, and you’ll wake up in the morning refreshed.

For many of us, including the 50 million to 70 million Americans afflicted by insomnia and other sleep disorders, this fundamental biological mechanism is not so simple. We know that when our sleep is disrupted, we suffer poor concentration and lost productivity.

We have more accidents at work and on the roads; more than a quarter of respondents in the National Sleep Foundation’s 2009 “Sleep in America” poll admitted to having fallen asleep behind the wheel in the last year.

But the effects of sleep debt go beyond our ability to stay awake the next day. “Heart attacks, high blood pressure, stroke, diabetes, memory problems, obesity: All of these have been connected to lack of sleep,” Chokroverty says. “But people — and not just the public but physicians as well — are not aware that [a lack of] sleep can cause these things.”

A doctor may treat a patient’s cardiovascular disease without ever identifying the sleep apnea that may be a contributing cause. Or a patient with insomnia may be prescribed sleeping pills while another underlying sleep disorder goes untreated. These are not hypothetical situations; the National Institutes of Health estimates that 50 percent of sleep disorders remain undiagnosed. Dostoyevsky’s delayed sleep phase syndrome might have gone unrecognized even today.

But it’s not only because Dostoyevsky’s doctor missed a diagnosis that the case is relevant to the healthcare professionals who read Sleep Medicine. In identifying the author’s sleep disorder, Chokroverty could as easily have been describing the case of a contemporary writer: Many circadian rhythm sleep disorders, like jet lag disorder and shift work disorder, are on the increase in modern times. “We don’t view sleep as a serious thing, and we’re all so busy working, moving ahead, competing, that there’s no time” to get more rest, he says. “So a large percentage of the population is sleep-deprived. But too many of us are not aware of the consequences.”

Tricia Brick is a writer based in New York.