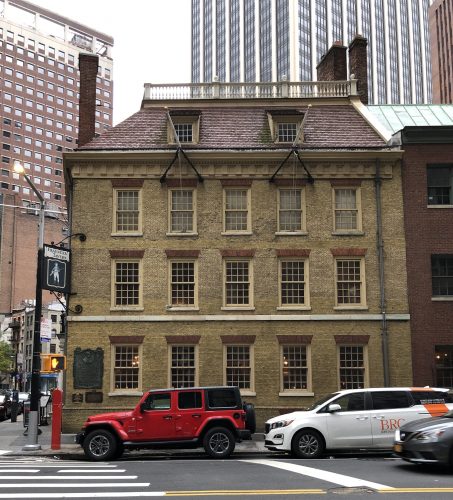 In lower Manhattan at the corner of Pearl Street and Broad Street stands a building that seems to have remained untouched since the day it was built three hundred years ago: Fraunces Tavern. With a welcoming red and yellow façade and an eye-catching sign featuring the image of a Revolutionary Minuteman, the tavern’s age and significance are difficult to grasp from the outside. The moment one steps inside, they are immediately transported back in time to early American New York City. Fraunces Tavern was constructed by the De Lancey family in 1719 and remained with the family until 1762, when slow business forced them to sell. The individual who purchased the building was Samuel Fraunces who turned it into a tavern called the “Sign of Queen Charlotte”.

As the dawn of the American Revolution drew nearer, the tavern’s most important patron began making regular visits. This was a gentleman by the name of George Washington, whose name and image can be found on every floor of the tavern today. As taverns were a hotspot for groups to gather, plan, and socialize, Fraunces Tavern drew more attention as organizations such as the New York City Sons of Liberty, New York Society Library, the Social Club, the Friendly Brothers of St. Patrick, the Knights of the Order of Corsica, and the Saint Andrew’s Society held meetings there. In 1775, during a bombardment from the ship HMS Asia, the three story tavern was hit through the roof by an eighteen pound cannon ball. The American Revolution and Fraunces Tavern would be intertwined from then through contemporary times, though its most famous moment would not occur until after the war had ended. 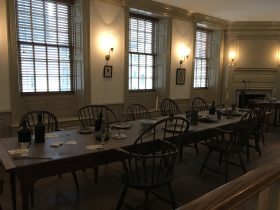 On December 4th, 1783, George Washington invited his officers to join him one last time in the Long Room in Fraunces Tavern in order to bid an emotional farewell. This address was recorded by Colonel Benjamin Tallmadge in his memoir which can be found on display at the Fraunces Tavern Museum.

After the war and the farewell, Fraunces Tavern continued operation serving patrons in lower Manhattan until three fires, one in 1832, one in 1837, and one in 1852, caused the owners to rebuild and repair the building. In 1900, with all of Pearl Street under threat of demolition to make room for new buildings, the Daughters of the American Revolution alongside the Honorable Andrew H. Green and the City of New York made a strong effort to preserve Fraunces Tavern. The City exercised its rights of eminent domain and made the building a park in order to prevent its destruction until the owners eventually sold it to the Sons of the Revolution in the State of New York, Inc. in 1904. 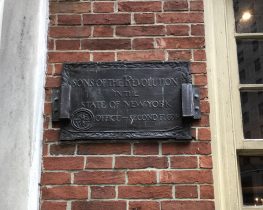 Today, the Sons of the Revolution in the State of New York, Inc. continue to own and operate the building, which now functions as both a bar and restaurant as well as a museum on the upper floors. Guests can eat, drink, and learn in the same building as the founders of the United States of America. This year, the Tavern celebrates its tercentennial with events throughout the year, offering patrons the opportunity to take part in remembering the oldest tavern in New York City.

All photographs were taken by George Rodriguez on 20 October 2019.