“Fulton Ferry was Brooklyn’s connection to New York for hundreds of years, until that honor – and the associated prosperity – was usurped by the Brooklyn Bridge in 1883. There are records of the local natives, the Lenape (a.k.a. Canarsee) tribe, using the area as a crossing to Manhattan” (The Weekly Nabe). “Brooklyn’s most vital connection to the rest of the world has always been through its ferry landing, located across the East River from lower Manhattan. The first ferry service between New Amsterdam and Long Island came in 1642, linking newly settled Dutch farmers with the tiny port village. Within a few years, the Town of Breukelen was centered around that landing” (Bowery Boys).

The Fulton Ferry is significant because it is the ferry that is mentioned and apparently taken in Walt Whitman’s “Crossing Brooklyn Ferry.” 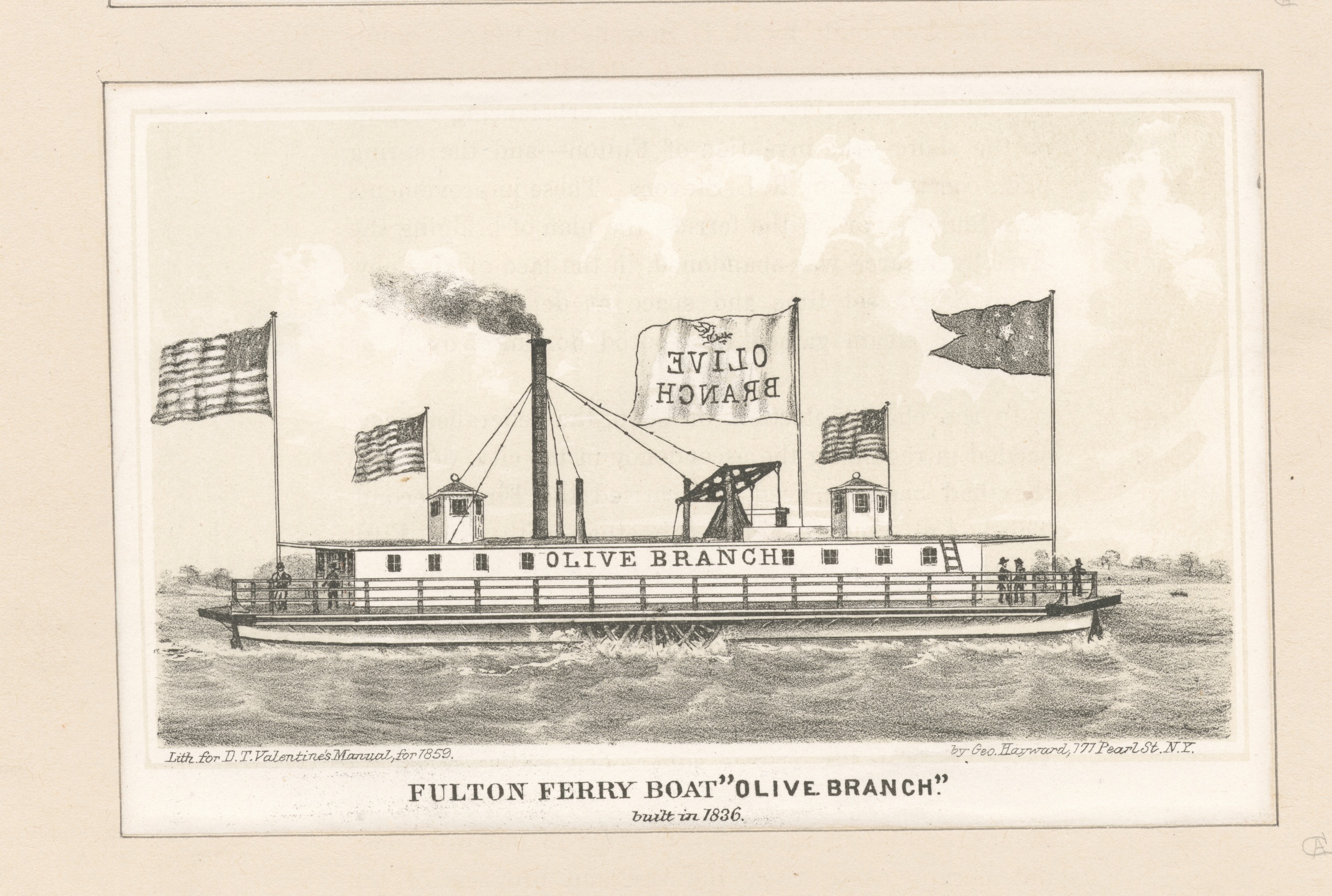 “A different sort of revolution came in 1814, when Robert Fulton, at the behest of Brooklyn magnate Hezekiah Pierrepont, secured a 25-year lease on the ferry, using his steamboat Nassau. The first trip was made on May 10, 1814, and brought with it the first predictable passage between Brooklyn and Manhattan. Trips took no longer than twelve minutes, and there was no chance of the ship being swept upstream or downstream, or held to the whims of the wind” (The Weekly Nabe).

“Eventually, Union Ferry reduced its fare to one cent in stages between 1842 and 1850, bankrupting the competing lines and allowing Union Ferry to purchase their rights” (The Weekly Nabe).

“With the competition destroyed, Union Ferry raised its rates again. There was outrage when, in 1854, it doubled its rate back to two cents – an additional 10% of the typical worker’s salary” (The Weekly Nabe).

“This point was still Brooklyn’s nexus of existence for this waterfront town when Robert Fulton brought his steamship service here in 1814. Renamed Fulton Ferry, the technological improvements allowed for a smoother, quicker journey — 12 minutes in total, and on a set, predictable schedule. The story of Brooklyn itself begins here as land developers took advantage of the ferry’s new conveniences to build desirable properties on nearby Clover Hill (to be renamed Brooklyn Heights)” (Bowery Boys). 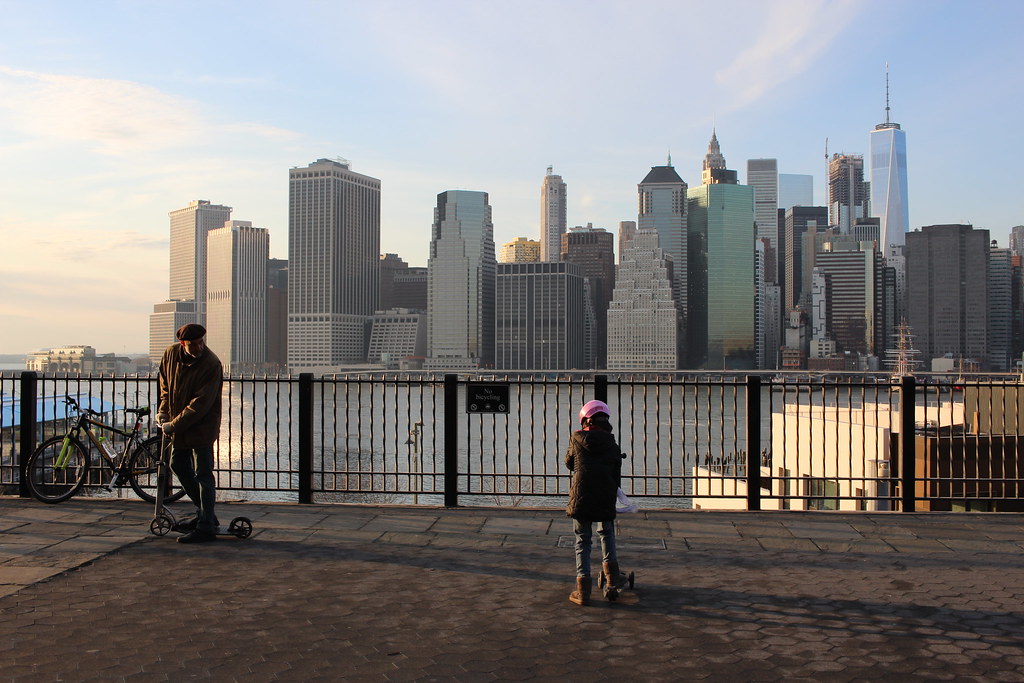 View of Manhattan by Brookyln Heights. You could see the East River which the Fulton Ferry would cross in order to take people into Manhattan.

“Flash forward to the 1860s — thousands of people now live in City of Brooklyn, over a quarter of a million. And a great number of them work in Manhattan, taken to the ferry terminal by use of horse-drawn rail or carriages. If the city was ever going to compete with its more developed sibling across the river, they would need to dress up their most basic transportation structures” (Bowery boys).

“And so in early 1864 came a flamboyant ferry terminal designed by John Kellum, a cast-iron wonder in the Romanesque style with large windows and a mansard roof” (Bowery Boys).

“Spacious and elegant apartments will be provided for ladies and gentlemen, detained between the trips, and the well-known vender of confectionery and sodawater will retain his accustomed stall. The architecture of the main front on South-street will be bold and massive in design, and yet, from a judicious arrangement of the windows and arches, will present a light, airy, and highly ornamental appearance” (New York Times).

“After almost three hundred years of continuous service, the Fulton Ferry shut down for good in 1924. The terminal remained until  it was badly damaged in a fire on October 8, 1925” (Bowery Boys).

“Just a year later — perhaps as a reaction to that great fire — the Fulton Ferry Fireboat House was built the next year. That classic structure now houses the Brooklyn Ice Cream Factory” (Bowery Boys).

“In 1955 a new polished black granite base replaced the cast stone pedestal, the statue was replicated in more durable bronze, and the original deteriorated zinc sculpture placed at that time in the collection of the Museum of the City of New York. This replica was conserved in 2001 by the NYC Citywide Monuments Conservation Program. In 2010 the original sculpture was given to the Brooklyn Museum, where it is displayed” (Bowery Boys). 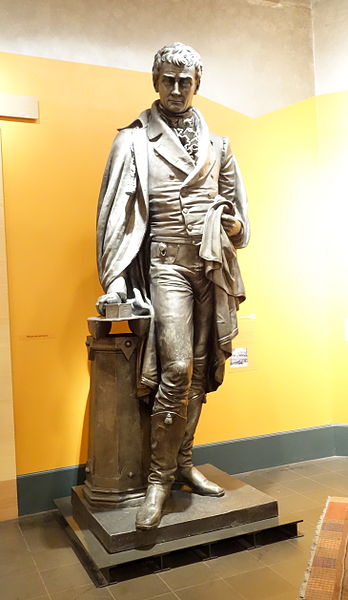 In “Crossing Brooklyn Ferry” Walt Whitman talks about the closeness people have to each other and the city while riding on public transportation such as the ferry. It makes sense that Whitman would be fascinated with the ferry as a mode of transportation because of the nature that surrounds the ferry such as the water and outdoors. Whitman describes, “The simple, compact, well-join’d scheme, myself disintegrated, every one disintegrated yet part of the scheme” (Whitman 139). Whitman has the idea that people when separated from the city all look or blend into one while still maintaining their individuality depending on whether the perspective is coming from the boat or from the city. From the view of the city everyone looks as if they are one and on the boat everyone the city looks as if they are one. Whitman describes the sensation of being on the boat and hearing all of the wonders around him. Whitman writes, “The glories string like beads on my smallest sights and hearings, on the walk in the street and passage over the river, the current rushing so swiftly and swimming with me far away, The others that are to follow me, the ties between me and them, The certainty of others, the life, love, sight, hearing of others” (Whitman 139). Whitman describes all that he sees around him and collects them like “beads” hinting at the importance of a perceived experience on public transportation and even the transportation to the city as part of the city experience (Whitman 139). We have talked a lot in class about how people’s expectations of the city are much great than the city itself. Whitman is saying that the anticipation of the city is not something that should be separated from the city itself and the idea of taking transportation to the city is a physical manifestation of that anticipation. Whitman writes, “I too lived, Brooklyn of ample hills was mine, I too walk’d the streets of Manhattan island, and bathed in the waters around it” (Whitman 141). Whitman has an idea that the city is all encompassing of everything around it. While Brooklyn is technically part of New York City it is often not thought of in the same vain as Manhattan. People think of Manhattan as the definitive part of the city. Any thoughts, feelings, places, things, etc. that crossed Whitman’s mind at some point while experiencing the city have now become a part of the city. He says, “Flow on, river! Flow with the flood-tide, and ebb with the ebb-tide! Frolic on, crested and scallop-edg’d waves!” (Whitman 143). Whitman likens his sensations, attitudes, and optimism towards the city to the waves and water that surrounds the ferry. He then says, “Throb, baffled and curious brain! Throw out questions and answers! Suspend here and everywhere, eternal float of solution! (Whitman 143). The ferry is a place to contemplate the wonders of the city and reflect on one’s experience in the city. Reflection and anticipation is just as vital to the experience of the city as the city itself.

Boys, Bowery. “The Fabulous Former Fulton Ferry Terminal – and the Surprising Piece of It That Still

Fulton Ferry in 1750, From the Brooklyn Shore. picryl.com/media/fulton-ferry-in-1750-from-the-