Trinity Church is one of the most popular landmarks in New York City, and currently stands on Manhattan’s Wall Street.

According to a New York Times article entitled, “The Church With the $6 Billion Portfolio” written by Jane Margolies, Trinity Church was created when “King William III” issued a “charter […] in 1697” (Margolies). The land that the church was built on was a gift from “Queen Anne in 1705,” who gave “215 acres” for the church (Margolies). Today, “Trinity still owns 14 acres of that original land grant” (Margolies).

Margolies writes about the design of the church, and states that it was “designed in a Gothic Revival style by Richard Upjohn;” furthermore, the structure “was the tallest structure in the city for decades” (Margolies).

Margolies also explains some of the new renovations that will be done to Trinity Church. For example, “there will be three new organs, ergonomically contoured seats […] and stained-glass pendant lights that will be controlled by an iPad” (Margolies). In addition, Trinity Church’s “famous altarpiece,” which was “donated by the Astor family, will be restored and placed on rails,” so it can be mobile during events (Margolies).

According to Margolies, Trinity Church often participates in philanthropy and community work. For example, the church “has given away $10 million a year and plans to ramp up its contributions;” in addition, the church also “finances its own humanitarian efforts,” as they provide “a 325-unit affordable residence for older people and those with disabilities, as well as brown-bag lunches for 35,000 annually” (Margolies).

Many authors wrote about Trinity Church and account its prominence and location. For example, Fanny Fern writes about Trinity Church, its graveyard, and the surrounding area, in her text entitled, “City Scenes and City Life: Number Two.” In Fern’s piece, she strolls through New York, and encounters Trinity Church, where she witnesses the “moss-grown graves,” and turns up to look at the “soft, blue heavens above” (318). Next, Fern “glance[s] over [to] the church-yard yonder into the street below,” where she sees “cholera and pestilence” that is “flanked on one side by the charnel-house” (319). Fern also describes the filth on the city streets that surround the church, which includes “decayed potatoes and cabbage stumps,” “mouldy bread,” and “salt fish and dead kittens” (319). 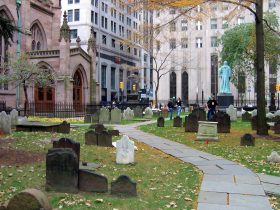 One of the renown features of the church is its court-yard, which holds the graves of many prominent figures such as John Winthrop Chanler, Robert Fulton, and Alexander Hamilton. 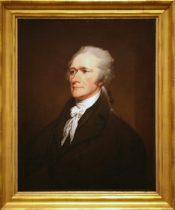 Alexander Hamilton was born on January 11, 1755/57, and served as an important figure in American history, as he was a “major author of the Federalist papers,” and the “first secretary of the [United States] treasury” (DeConde).

Hamilton is one of the people buried in the Trinity Church’s graveyard; in fact, he was actively involved in the church, and even helped the church with legal and financial issues. According to a post entitled “Alexander Hamilton, Churchman” on trinitywallstreet.org, Hamilton helped “Trinity refine and understand [their financial system” by providing them with “legal aid.” In “1796,” Trinity Church faced a legal issue when it was questioned how the church was making “5,000 pounds a year.” Furthermore, a “1697 Charter” forbade Trinity to “‘use, lease, grant, demise, alien, bargain, sell, and dispose of’ land ‘exceeding the yearly value of five thousand pounds.'” Hamilton and his counsel argued that “the land will eventually end up worth more than 5,000 pounds no matter what Trinity does,” and “that they can’t be held to that clause;” hence, Hamilton was one of the leading figures in relieving Trinity Church from facing a financial and legal crisis.