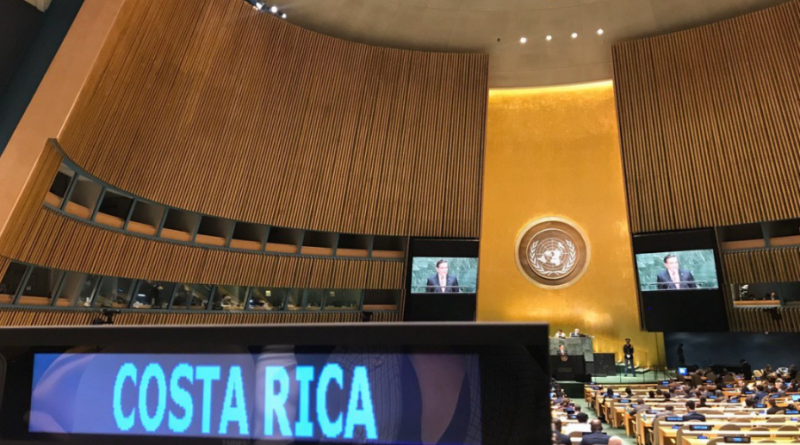 Costa Rica announced its bid for the United Nations Human Rights Council (UNHRC) this week, two years after the Group of Latin American and the Caribbean (GRULAC) states had nominated Brazil and Venezuela to fill the two seats allotted to the region for the 2020-2022 cycle. Eleanor Openshaw of International Service for Human Rights (ISHR) said that Costa Rica’s bid comes as good news, given the dire situation of Venezuela’s human rights record in the 2019 OHCHR report on Venezuela. Costa Rica is indeed the best candidate for the UNHRC given its track record of defending human rights and the global systems necessary to achieve them. 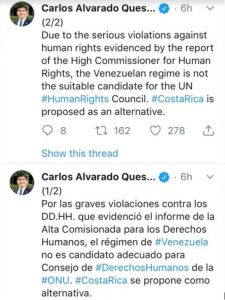 Costa Rica’s candidature announcement on October 3rd, 2019, is cutting it pretty close to the UNHRC election date, which is set for October 17th. By the time the votes are counted, the small Central American nation will have been campaigning for two weeks versus Brazil and Venezuela’s two years. While campaign time is limited for Costa Rica, the defense of human rights is nothing new for this small nation. Even before its midcentury regime change, Costa Rica had securely institutionalized basic human rights and civil liberties in its constitution, and human rights is now a central directive of Costa Rican foreign policy. Early presidents established the region’s first universal primary education (1869), abolished the death penalty (1882), allowed legitimate political competition (1889), and established the first international court (1907-1918). Labor rights and universal social services were introduced early in the twentieth century as a conscious strategy to modernize the country.

Only a couple of weeks ago, Greta Thunberg’s speech at UNGA and her message that climate change is the biggest human rights issue reverberated around the world. Costa Rica, a country that is particularly vulnerable to climate change, has long been on the leading edge of this perspective shift. On September 26th of this year, Costa Rica won the UN’s highest Environment award, Champions of the Earth. Ninety-eight percent of Costa Rica’s energy is renewable, and its forest cover stands at more than 53 percent after painstaking work to reverse decades of deforestation. In 2017, the country ran for a record 300 days solely on renewable power. The aim is to achieve 100 percent renewable electricity by 2030. Seventy percent of all buses and taxis are expected to be electric by 2030, with full electrification projected for 2050. In an era in which the interplay between environmental rights and human rights are increasingly apparent, Costa Rica is leading. 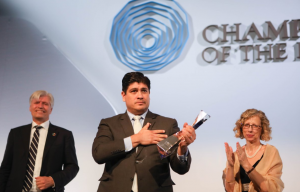 The same week as Costa Rica was awarded the UN environment award, Vice President Epsy Campbell was honored with the African Renaissance and Diaspora Network Award by the African Union at the UN for her leadership. Campbell is the first woman of African descent to become vice president in Costa Rica, and the second female vice president of African descent in the Americas, following Vice President Viola Burnham of Guyana. As President Alvarado noted in his UN General Assembly speech this year, Vice President Campbell will be leading a conference on the issues facing Latinos of African descent. The conference will be held in Costa Rica and shows the country’s embrace of marginalized identities, and its efforts in social inclusion. 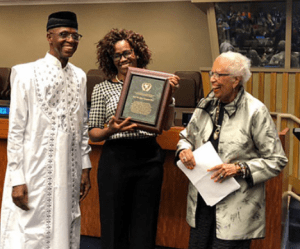 More importantly, Costa Rica’s commitment to the defense of human rights explains why the country is running for a UNHRC seat. Operative Paragraph 9 of the UN General Assembly Resolution A/RES/60/251 states that “members elected to the Council shall uphold the highest standards in the promotion and protection of human rights.” It is this principle that Costa Rica is trying to defend. This is a moment where a state that professes the importance of human rights is putting its money where its mouth is. In the words of Costa Rica’s Ambassador to the UN Rodrigo A. Carazo, “This isn’t a Costa Rica vs. Venezuela campaign. It is about human rights values and giving member states options. We are a country that has a proven track record of upholding and promoting human rights and our selection can only strengthen the mandate of the Human Rights Council.”

What type of leader do we want to see leading the charge on Human Rights? On October 17th, member states will have to choose between Costa Rica, a nation that has not had an army for over 70 years and that is taking climate change head on; Venezuela, a government that is rationing out food supplies to a favored few and using violence against its own citizens, and; Brazil, where the head of state says that the Amazon is not burning.

This pivotal moment can be the redeeming opportunity for the Human Rights Council and its member states. By choosing Costa Rica, not only are states choosing a country that has a clean human rights record but that also – as the UN award mentions – champions environmental rights that are essential for protecting human rights globally.

Sushant Naidu is a second-year M.A. candidate at Seton Hall’s School of Diplomacy and International Relations. He is specializing in International Law and Human Rights. He is a human rights defender and lobbied UN missions to support the mandate of the Independent Expert on Sexual Orientation and Gender Identity (SOGI) in 2016. In addition to the United States, his activism has led him to work on LGBTQI rights in India, Thailand, Cambodia, Vietnam, and Hong Kong. In 2018, Sushant was named a Global Innovator by the Human Rights Campaign. He works on Fourth Committee issues at the Permanent Mission of Costa Rica to the UN. He is the Editor-in-Chief at the Journal of Diplomacy and International Relations and his work has been published in the Huffington Post, the International Policy Digest and the Elephant Journal.