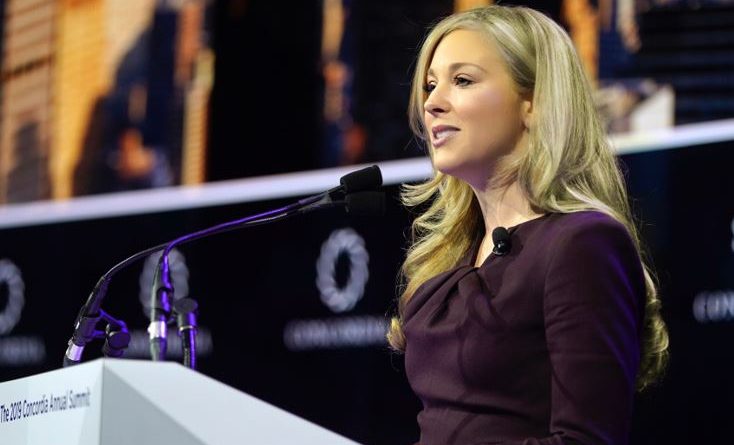 Three of our Associate Editors covered four specific events at the 2019 Concordia Summit.

This past week leaders of cross sector industries gathered in New York City for the Concordia Summit. The summit hosted an assortment of nonprofit leaders, private sector professionals, journalists, government representatives, and media titans – all with one goal in mind: to facilitate partnerships between their sectors and increase social impact. One such distinguished speaker was Beth Doane, an expert in strategic branding of the firm Main & Rose graced the event stage with in-depth discussions on mental health.

Beth Doane began her speech with a deeply personal message. She spoke about her experience as an adopted child, and the emotional journey she went on to discover her birth parents. As she recounted her story, the audience grew increasingly silent. Ms. Doane had spent years searching for her parents, until one day when she was finally able to gain access to her original birth certificate. From there, her journey towards discovering her roots began. She discovered that her birth mother’s name was Amy, and that she had passed away in Los Angeles during the same year that Beth had relocated there. After hiring a private investigator to substantiate what she had found online, Beth learned that her birth mother was diagnosed as a paranoid schizophrenic, spent many years homeless, and had struggled with drug addiction. Substance and mental illness disorders involve roughly 1 out of every 8-emergency room visits in the US while only 43% of adults with diagnosed disorders are actively receiving treatment.

Ms. Doane’s search for her family didn’t stop with the heartbreaking news of her mother’s life experiences. The private investigator she hired had located her biological father, and sister. Unfortunately, she had also discovered that her father had a long criminal record ranging from stalking, vehicular homicide, multiple murder attempts, and was also diagnosed as a paranoid schizophrenic. Since learning about her biological family, she became increasing aware of the importance of mental health and the drastic impact unaddressed problems can have on an individual. Roughly 100 suicides are occurring daily in the United States. The National Alliance on Mental Illness estimates that serious mental illness costs the US economy an average of $193 billion in lost earnings annually. By 2030, discrepancies in mental health care are on track to cost the US an additional $16 million.

Through highlighting the importance of cross sector initiatives to address mental health disparities on a global platform like the Concordia Summit, industry leaders are given a chance to change the narrative on mental illness. Beth Doane concluded her speech by summarizing a few simple things we can do to change the narrative on mental health: “We need to speak up, regardless of how frightening it may be, to pursue the change we need to see in the world. Through sharing our stories or personal experiences, we can make an impact and prompt others to do the same”

Nicole Kalczynski is an Associate Editor at the Journal of Diplomacy and an MA candidate in International Relations and Diplomacy at Seton Hall University. She specializes in Europe and Foreign Policy Analysis. 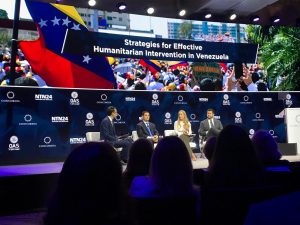 Venezuela was a flagship issue at Concordia. A panel moderated by Gustau Alegret, US News Director at NTN24, brought together Davis Smolanisky, Chair of the Working Group on Venezuelan Migration and Refugee Crisis at OAS; Carlos Vecchio, the Venezuelan Ambassador to the U.S.; and Lilian Tintori, a Venezuelan human rights activist. They debated strategies for effective humanitarian intervention in Venezuela, where 4.3 million people have fled because of the crisis, making it the largest displaced population in an area where there is no ongoing war or a natural catastrophe.  Ambassador Vecchio urged the international community to support interim Venezuelan President Juan Guaido, who chimed in via a pre-recorded video aired on the big screen. “To resolve the humanitarian crisis and the political crisis,” Guaido said, “We need to attack the roots of this problem, which is the Maduro regime. We need to realize as Venezuelans and as the international community that this regime made a disaster… The sooner we stop what’s happening in Venezuela, and we restore democracy in our country, the sooner the whole continent will benefit, because if we end a dictatorship, prosperity will follow.” 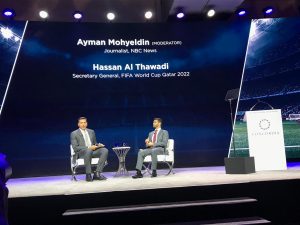 As a former sports journalist, my favorite event of the Summit was a dynamic Q&A session hosted by NBC’s Ayman Mohyedin on “Sport’s Transformational Power: The first FIFA World Cup in the Middle East”. The audience engaged Hassan Al Thawadi, Chairman of the 2022 FIFA World Cup on the controversies surrounding the-first ever World Cup to be hosted in a Muslim country. Al Thawadi responded to questions on labor exploitation, women’s rights and LGBTQ discrimination, saying that “everyone will be welcome in Qatar and this will be an inclusive tournament. We don’t all necessarily share the same point of view, but our differences should not separate us, we should appreciate our differences. Our humanity is the commonality between us”. Al Thawadi also addressed reforms Qatar has been implementing the past few years to strengthen labor sector laws and address human rights concerns in the country.  Also, Al Thawadi addressed regional dynamics, saying that despite the fact that Qatar is “currently subject to an illegal blockade,” if you look at things from the people’s point of view, Al Thawadi argued “the region is together”. Al Thawadi’s optimism was based on his belief that, when sports are separated from politics, people can be brought together and focus more on what reunites them instead of what divides them.

Houssam Eddine Beggas is an Associate Editor at the Journal of Diplomacy and an MA candidate in International Relations and Diplomacy at Seton Hall University. He specializes in the Middle East and International Security.

Actress, author, and activist Diane Guerrero joined Olga Segura, Paola Ramos, Monica Ramirez on the panel for “Leading Latinas: Re-centering Humanity Through Activism and Action” this year at the 2019 Concordia Annual Summit. Guerrero, who plays Maritza Ramos in “Orange is the New Black” and Lina in “Jane the Virgin,” discussed what it means to be Latinx in today’s America and her role in civic engagement. In her memoir, “In the Country We Love: My Family Divided” Guerrero shares her story of childhood trauma after she came home from school to learn her parents had been deported. “I find my strength as a first generation American, as a daughter of immigrants, as an influencer and as, now, an activist,” Guerrero said. She also commended the Latinx community on leading movements on gender equality, immigration and representation.

Activist, author, and civil rights attorney Monica Ramirez shared her story of her family migrating to the US as migrant farmworkers. “My parents and grandparents worked in the fields, crisscrossing this country, picking the fruits and vegetables that we eat,” Ramirez shared with the audience at the Concordia Summit. “I bring forward the voice of rural Latinas. Often times when people think of rural America, they don’t think of Latinos living in rural America,” Ramirez said. Joining the Southern Poverty Law Center in 2006, Ramirez has used her platform to fight against sexual violence and gender discrimination against immigrant women and migrant farmworkers. “Immigration is one issue that we need to address, but we also have to talk about the economy, about discrimination, about safety and dignity at work… and we can’t separate them because when I walk into a room as a Latina, I bring all my identities. We have to really take an intersectional approach in addressing these issues on a policy level as well as a societal level,” Ramirez said.

Christina Mojica is an Dual Associate Editor and Social Media Associates at the Journal of Diplomacy and a dual MPA/MA candidate in International Relations and Diplomacy at Seton Hall University. She specializes in Foreign Policy Analysis.