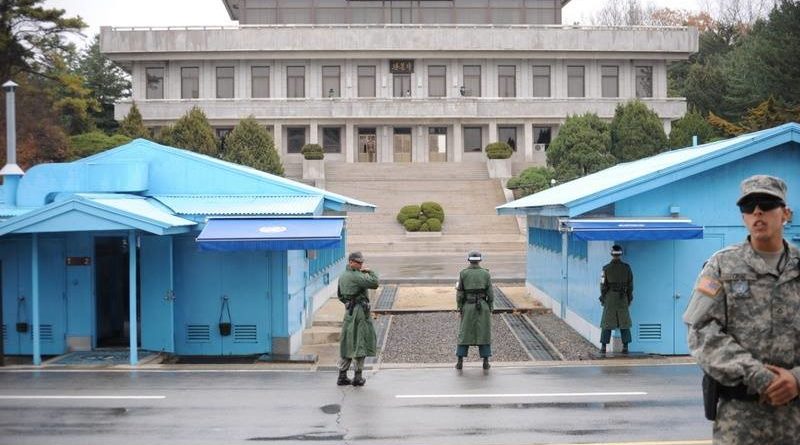 North Korea’s Director-General of the U.S. Affairs Department has stated that the United States has crossed a “red line” by placing the Democratic People’s Republic of Korea’s (DPRK) leader, Kim Jong-un on a list of sanctioned individuals. This action has been interpreted by North Korea as a declaration of war. This statement comes in the same week that a top North Korean diplomat stated that the country is ready to conduct another nuclear test. Whether the country conducts any additional tests will depend entirely on the attitude of the United States. In response to this rhetoric, the U.S. State Department has urged North Korea to cease this rhetoric and not engage in any actions that could destabilize the Korean Peninsula. The question begs, what is the catalyst driving this destabilizing rhetoric?

Rhetoric is nothing new for the Kim regime; however, it is becoming increasingly frequent and belligerent. In March of this year, North Korea threatened to attack Manhattan and even went as far as to share a video of the White House and South Korea’s equivalent, the Blue House in crosshairs. The rhetoric often seems to come in sudden waves, dissipating as mysteriously as it begins. This wave is a bit more threatening with the developments in North Korea’s nuclear and missile programs. The DPRK rang in the new year quite literally with its fourth nuclear test. Since this test, North Korea has launched several missiles and even a satellite into space. The world fears that North Korea may have taken an important step towards creating a functional intercontinental ballistic missile (ICBM). With continued nuclear developments, the DPRK could become capable of miniaturizing nuclear warheads. If North Korea were to equip an ICBM with this technology, it could launch a nuclear attack on any country within its range.

The international community has not taken these actions lightly. Just recently, the U.S. confirmed its intent to deploy the Terminal High-Altitude Area Defense system (THAAD) in South Korea as a shield against potential nuclear attacks. In March the United Nations implemented the toughest sanctions yet towards North Korea in an effort to reduce its nuclear and missile capabilities and deter further tests. The effects of these sanctions are beginning to become apparent. North Korea’s exports of coal to China fell 14.6 percent in the first half of this year. Could the rhetoric and tests merely be a façade to mask the crumble of the Kim regime and its control over North Korea?

The fall of the Kim regime and liberation of North Korea is a topic that is often covered by scholars, policy makers, and international news outlets alike. It is generally agreed upon by many that the reign of the Kim regime is finite and could collapse at any time. At the Seventh Congress of the Workers’ Party, Kim Jong-un not only solidified his rule of the nation with his new appointment as Chairman of the Party, but also unveiled a new five-year economic plan. While the plan promises to improve the standard of living for North Koreans, its prospects for success are bleak with sanctions in place. As the U.N. sanctions continue to hinder and pressure the regime, collapse may be inevitable. As North Korean citizens become increasingly dissatisfied with the regime, a coup or uprising may occur. For this reason, the target of North Korea’s rhetoric and nuclear and missile tests may not be the international community, but its own people. These actions may be an attempt to win back the hearts of North Koreans to prevent an overthrow from occurring.

In recent years it has been reported that more citizens from the middle and upper classes are fleeing North Korea. In the past, defectors were generally poor and escaped as a means of fleeing poverty and for survival. Citizens are seeing more of the outside than ever before, especially those in higher social classes. They have opportunities to travel abroad for business or politics. Many of them are seizing this opportunity and are fleeing North Korea. Reports of defectors from this year include one of the largest groups of defectors in recent years, and also a senior intelligence officer, the highest ranking defector in history. These higher social classes with the privilege of traveling outside North Korea are considered to be the most loyal to the Kim regime. The fact that they are defecting in greater numbers may speak volumes about the political situation in North Korea.

If it is indeed the case that Kim is attempting to fortify his hold over the country and its people, then the rhetoric and tests will likely intensify. We likely will not see an end to these destabilizing attempts until Kim Jong-un has secured his authority over the people, or the regime collapses. The coming years will be trying for the Kim regime as it combats sanctions and international criticism to reinforce its control. If the U.N. sanctions continue to work and the regime is unable to tighten its grasp over the North Korean people, the world may finally see the end of the Korean War.

4 thoughts on “North Korea Declares War: A Battle of Rhetoric”