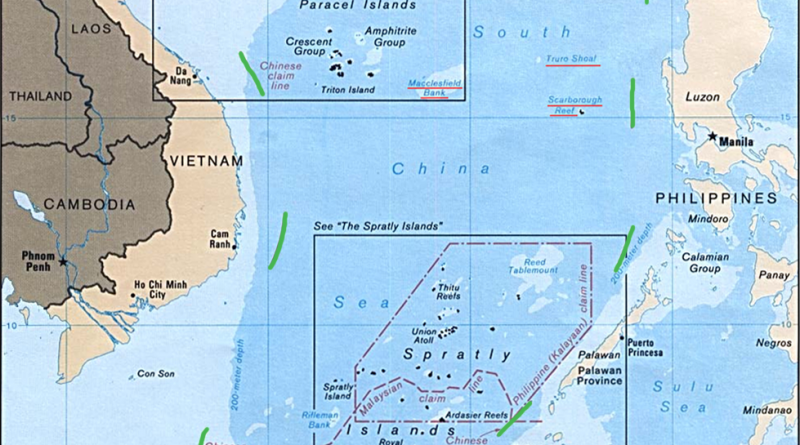 A momentous ruling to an arbitration case filed by the Philippines in January 2013 that contested the expansive Chinese territorial claims of the South China Sea, the Permanent Court of Arbitration (PCA) in The Hague invalidated the latter’s claims of “historic rights” to the islands in the South China Sea. These rights, the Court said, were incompatible with exclusive economic zones (EEZ), which gives a country maritime right to resources such as fish, oil and gas within 200 nautical miles of that land mass, as provided for in the UN Convention on the Law of the Sea (UNCLOS) of 1982. Both parties are signatories to the UNCLOS, which governs and stipulates the rights of countries in using the world’s oceans. PCA further opined that “China had violated the Philippines’ sovereign rights in the EEZ by interfering with Philippine fishing and petroleum exploration, by constructing artificial islands and failing to prevent Chinese fishermen from fishing in the zone”. The tribunal further ruled that the disputed Spratly islands “cannot generate maritime zones collectively as a unit” as claimed by China, and that it had “violated prevailing international law on multiple levels”.

The Court has quashed the Chinese claims over areas falling within the nine-dash lines of the sea, where the dashes define a boundary that constitute virtually 85 per cent of the South China Sea as Chinese territory.

What is the South China Sea Dispute?

Unrest over the claims of Chinese ownership over the small islands that are more than hundred in number and reefs in the South China Sea reached its peak when China took effective control of the disputed Scarborough Shoal, a largely submerged chain of reefs and rocks set amid rich fishing grounds off the main Philippine island of Luzon after a tense standoff in 2012. Interpreting the conflict as a violation of the freedom of navigation in theory and in practice, US officials brokered an arrangement for Philippines’ vessels and larger Chinese maritime surveillance ships to simultaneously withdraw from the tiny shoal, a deal which the then Philippine President Benigno Aquino III said he observed and implemented. But the Chinese ships never withdrew. Since then the conflict has only escalated. For instance, Chinese coast guards have also encircled the Second Thomas Shoal, which has been guarded by Filipino marines. The former have attempted to block Philippine vessels from bringing food supplies for the marines, sparking dangerous action-reaction game at high seas.

Given this situation, the Philippines said it had no other choice but to elevate the dispute to international arbitration. This case represents one of the very first legal challenges to Chinese claims in the territorial conflict. The Philippines’ request to declare Chinese fishing and construction activities as a breach of the former’s maritime rights was also honoured by the PCA (The South China Sea Arbitration Award of 12 July 2016, The Republic of the Philippines V. The People’s Republic of China).

The significance of South China Sea can be understood by not only because it is vast, which stretches over 1.4 square miles, but more prominently because it is home to enormous resources, like oil and gas that are located under the seabed, along with being vital fishing grounds for fishermen for generations. Fisheries account for 12 per cent of the global catch annually. Apart from these, South China Sea is an essential gateway for global commerce, where more than five trillion dollars’ worth of trade passes through these waters every year.

The dispute arises not just because of rights to these invaluable economic assets, where control over the Sea would mean greater access to fisheries and more leverage over its shipping lanes, but it is the contest to build and bolster presence. The strategic location of the Sea in close proximity to the East and Southeast Asian countries provides incentives for nations to control the military and civilian activities around the waters.

Reactions to the Verdict

Soon after the case was lodged in 2013, the Chinese leadership decided to boycott the whole ruling procedure. China has repeatedly denied the PCA’s authority to rule on the dispute over the strategically vital region, and refused the opportunity to defend its position in The Hague. While demanding one-on-one talks to resolve the disputes, it had also warned the Philippines of a diplomatic and economic backlash. While the award of July 12, 2016, the South China Sea dispute was outrightly rejected by the Chinese government and media, with the Chinese foreign ministry reasserting that “The award is null and void and has no binding force, China neither accepts nor recognises it”, the verdict was welcomed in the Philippines as it saw its position defended in The Hague.

Going by the laws, the PCA cannot enforce its decision upon China, as one sovereign state cannot take legal action against another state without mutual consent. According to Former Philippine Foreign Secretary Albert del Rosario, Chinese resolution to ignore the verdict could blunt Philippines’ move, but would certainly boost a moral victory that could be harnessed by the Philippines to its advantage. It would also encourage Taiwan, Vietnam, Malaysia and Brunei to file similar cases.

Seeking to negotiate directly with the Philippines and each of the four other claimants individually would give it a greater clout for its sheer size and influence. Beijing has steadfastly opposed bringing the disputes to an international arena.

Choosing to ignore the verdict, China has set the stage for other countries to intervene in the dispute. It drew reactions from around the world, where, the United States, Great Britain and the European Union were eloquent of their support for the arbitration. Senator Marco Rubio of the US in a press release expressed his happiness over the PCA’s verdict and also articulated his disappointment that “China refused to even attempt to participate in the proceedings and that China has already rejected this decision”. He also said that China cannot and will not be allowed to obstruct the free flow of commerce through this vital region and to pursue illegitimate claims and to militarize an area that is essential to global security.

It further confirms the possibilities of South China Sea becoming one of diplomatic difficulties of China, with not just regional states but also with the US. The Philippines would be open to work with the longtime friend and partner, America and other countries to demand Chinese compliance in diplomatic forums worldwide, including the United Nations. To bolster its position on the strategically vital region, China has rapidly converted the reefs into artificial islands capable of hosting military planes. According to the US Pacific Command Chief Admiral Harry B. Harris Jr., the simple reason for China’s push was to become a hegemon in East Asia. Intentions to seek global dominance, based upon the power transition theory, the Chinese desire to challenge the status quo presents the likelihood of a dangerous encounter in the region. It does not come as a surprise that following the PCA’s judgement, the US has unequivocally called upon China to respect the tribunal’s decision, and the subsequent support it garners, would act as a test of its ability to maintain its leadership role in the Asian security discourse, through its Pivot to Asia strategy.

While Beijing has refused to participate in the arbitration process and present its position on the one hand, it has launched a global propaganda campaign to make its case. Towards this, it has claimed the diplomatic support of over forty nations of the world which includes Pakistan, Kenya, Zimbabwe, Angola, Madagascar, Papua New Guinea, Malawi, Guinea Bissau, Tanzania, Zambia, Mauritania, Cameroon, Ethiopia and others. Whereas, Beijing has avoided making a formal claim of sovereignty over the South China Sea, and has called for bilateral deals with concerned nations, which would wield greater influence upon the latter, yet it has steadily engaged in the construction of airstrips and military outposts in the Sea. Singing to the tune of China resulting from economic compulsions, these countries have called for dealing with the South China Sea disputes between the directly concerned parties through peaceful negotiations.

Strategic analysts believe that these could eventually be turned into a vast military complex, and on a small provocation or a miscalculation from any side could dangerously escalate the conflict. They have pointed out that these islands are not a part of only maritime rights but of economics, of power and of realist politics. While the ruling in The Hague is regarded as legally binding, there is no mechanism to enforce it, and will depend upon whether the Philippines is prepared to continue to assert against China based on the award and China’s responses to those assertions.

Nevertheless, at present it stands vindicated that the brazen defiance and denial of the tribunal’s judgement, China stands as an opponent to the rules based international order. At a time when it expands its political and economic influence on the world stage, it risks being seen as a rogue nation and being branded as an outlaw, if it doesn’t comply.

Simi Mehta, a Fulbright Scholar at Ohio State University, is currently with the US Studies Division of the School of International Studies, Jawaharlal Nehru University, New Delhi, India. She writes on Indian and American politics and foreign policy, Great-Power rivalry, food security and climate change.