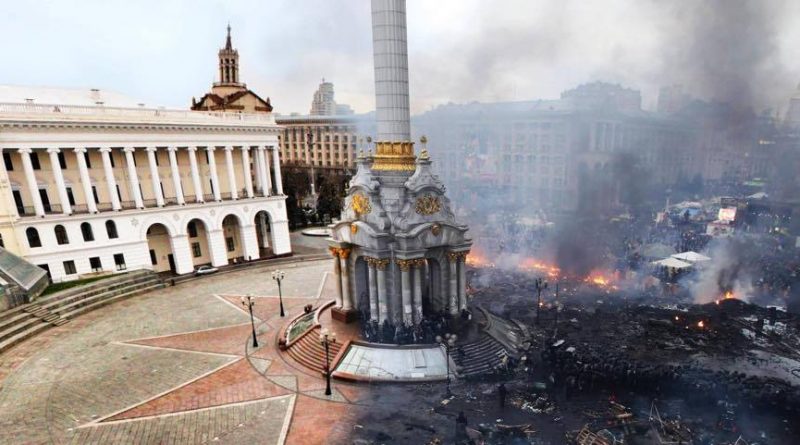 There is a famous riddle which asks “if a tree falls in a forest and no one is around to hear it, does it make a sound?” Alluding to the nature of perceived reality, the question bounced around in my mind as I wandered through Boryspil International Airport, the largest airport in Ukraine. Having only remembered vague details of revolutions and the annexation of land, I was prepared to encounter, seemingly, endless lines waiting at checkpoints and baggage areas. Airport security, however, was, visibly, minimal. Like many westerners, I was, and still am, guilty of reading devastating headlines of war and death, declaring them as shameful, and going about the rest of my day. So much has occurred in our sphere of global affairs within the past three years, it can be all-too easy for events, such as Ukraine’s Revolution in 2014 and Russia’s annexation of Crimea the following summer, to be brushed aside. I wondered how Ukrainians perceived the rest of the world lacking knowledge of, or interest in, the conflict, which, for the perceiver, amounts to the same thing. The war in Donbass, a region in the eastern part of Ukraine, has been relatively quiet in western media for the past two years. And yet, what was once a slowly simmering fight now has Ukrainian military forces actively engaged in an escalating conflict with pro-Russian separatists.

Participating in a week-long security symposium in Ukraine’s capital of Kyiv raised my awareness regarding ongoing conflicts receiving little to no coverage across western media platforms. Stroll through the city’s bustling Maidan Nezalezhnosti Square, or Independence Square, today without the direction of a local guide and one would be hard-pressed to find traces of an on-going war or a recent revolution. And yet, the Maidan was the setting of the Euromaidan Movement, or Ukrainian Revolution, where public protests calling for the resignation of President Viktor Yanukovych were met with a stiff government response, resulting in the deaths of 130 protestors and policemen. My personal guide, readily, pointed out the stealthy positioning of unknown snipers from a towering hotel just across the Maidan. The guide’s impassioned tour coupled with the symposium leaders’ message of debate and reform made me keenly aware of how the conflict is still very much at the forefront of Ukrainian discussion. During the commencement of the 2016 Young UA Security Forum, the director’s closing statements ended in a boisterous Ukrainian call-and-response with the participants. “Glory to Ukraine! Glory to the heroes!” While the rest of the world continues to turn, Ukraine is forced to stop and consider its next move against Russian aggression.

Waxing existential with my colleagues, I wondered if the world’s fading memory of the two-year conflict hinders the prospect of, collectively, solving the country’s security challenges. Discussing the matter with Phil Jones, a Special Defence Advisor with the UK Ministry of Defence in Ukraine and expert on security sector reform and governance, he suggested that the remedy to countering this apparent lack of interest among the general population lies with the media. By investigating and reporting on abuses within Ukraine’s security institutions, the media can expose the failure of transparency and accountability mechanisms and raise awareness about war and the venality of government officials through channels of public discussion. This is a task many Ukrainians are prepared to adopt in the spirit of imparting truth about their country’s geo-political ailments, all the while debunking their eastern rival’s spin on current events. During the forum’s workshop on NATO’s renewed commitment to a successful strategy of deterrence and détente in Ukraine, a colleague, innocuously, referred to the war as the “Ukrainian Conflict.” Before she could conclude her point, the head organizer politely, yet firmly, corrected the participant’s designation as the “Ukrainian-Russian Conflict.”

A veracious disposition appears to be the attitude of a population whose recent history and prospects for the future have been marred by corruption and war. Although the old guard sees events in Ukraine playing out more favorably for future generations, young people are less optimistic. For them, it seems impossible to shake the specters of corruption, economic woes, and war. In an op-ed piece for The New York Times, Aleksandr Lapko, frankly, expresses a dilemma he and many other Ukrainians have faced during their country’s time of war. “Should I go to war knowing that I will have to pay more than $2,000 out of my own pocket to get the military equipment that could save my life […] or should I pay a $2,000 bribe to obtain papers falsely testifying that I am medically unfit and should thus be taken off the conscript list?”  The war in Donbass is ongoing and the failure of achieving a sustainable peace through the Minsk Agreement is uninspiring. The fallen tree does, in fact, make a sound whether we are standing in the forest or not. The question then becomes whether we in the West will prevail in hearing calls of timber in time before the entire forest comes crashing down.

Photo courtesy of The Higher Learning.

One thought on “Timber! What the Ukrainian-Russian Conflict Says about Ukraine and the West”