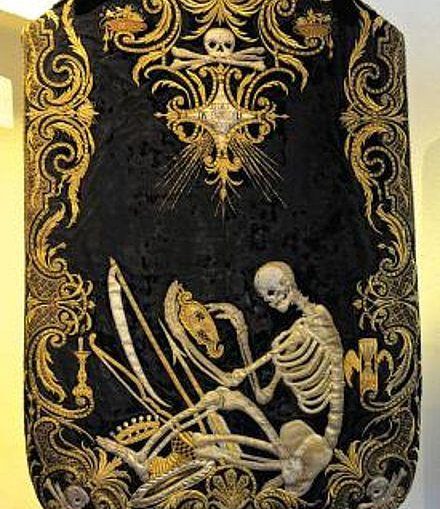 Thus utters the child in The Sixth Sense, the popular thriller film directed by M Night Shyamalan and starring Bruce Willis. The movie contains many aspects of “horror,” by showing flashes of dead people still displayed in the gory way that they had died. Even if you haven’t seen the movie, you’ll likely have heard the line “I see dead people” quoted in other contexts as a reference. This line is spoken by the other protagonist in the movie, a young boy named Cole. And where does Cole go when he is afraid of his visions of dead people?

None other than to a big Catholic Church.

Darkness, death, and despair. These qualities don’t belong in the Church, or so one might think. Some may even argue that these gloomy words go against the values of the Church altogether and more properly belong to the Macabre and Horror. However, in reality, the Church made the Macabre and horror a mainstream part of the arts. Even a film like The Sixth Sense points to a connection between horror and the Catholic Church. The truth is that there’s an evolving theology in the Catholic Church that has allowed its faithful to reflect on and attempt to understand one aspect of life that is guaranteed: death.

Before delving into how the Church created and embraced the macabre, the term must first be defined. “Macabre” is a horrifying or disturbing depiction of death. The macabre is associated yet separated from the genre now known as horror. The Catholic Church has used Macabre either directly in its liturgy or by the faithful in a cultural aspect dating as early as the High Middle Ages to the present day. The difference between Catholic Macabre, as it will be referred to from now on, and horror, are the differing perspectives of death.

The Catholic Church has detailed views on the macabre, and, more specifically, death. The Catechism of the Catholic Church states that there are certain respects pertaining to the dead. It states: “The bodies of the dead must be treated with respect and charity, in faith and hope of the Resurrection. The burial of the dead is a corporal work of mercy; it honors the children of God, who are temples of the Holy Spirit.” (CCC 2300) For Christians, death is not final. Those who prepare the deceased for their final destination receive graces.

Although Stanley Kubrick’s film The Shining is a psychological horror, it has many themes relating to death. The film is extremely surreal and is open to interpretation. Scholars have debated the meaning of the film since its premiere. One interpretation is that the characters are in purgatory. This interpretation sees the setting as a family taking care of a hotel that is filled with tortured souls. The hotel in the film also has a labyrinth on its grounds; the labyrinth is a representation of purgatory. In order to reach heaven, one must follow the path towards it, just like one might follow the path that a labyrinth traces out to a center or goal. The labyrinthine path is meant to influence the person walking it, just as the focus after death, for a Christian, is to be purified in purgatory.

Throughout its history, the Catholic Church has used the Macabre as a part of its worship. Especially during requiem Masses, All Saints Day, All Souls Day, and in its art and architecture. Catholic Macabre was most popular during the Middle Ages but is used throughout history. The most frequent use was, and still is, during the Requiem or funeral Mass.

The Latin Requiem Mass, especially before the Second Vatican Council had a large focus on death. One of the most iconic and remembered parts of the Requiem is the Dies Irae Gregorian Chant.
The melody of the chant is famously used in the film, The Shining and many others such as The Screaming Skull and The Seventh Seal. The first words, translated from Latin are:
“That day of wrath, that dreadful day,
shall heaven and earth in ashes lay,
as David and the Sybil say.
What horror must invade the mind
when the approaching Judge shall find
and sift the deeds of all mankind!”

The faithful are not only reminded of the departed’s sins but of their own as well. Now, of course, not everyone could interpret Latin. For those who couldn’t, the black vestments also portrayed death.

During All Saints and All Souls days, the priest and deacon would wear black vestments with skeletons. These skeletons would be looking at clocks. This was an expression of the term Tempus Fugit Memento Mori: “time flies, remember death.” There were also vestments with skulls wearing different headgear, including crowns and a papal miter. These vestments were a reminder of Tempus Fugit Memento Mori, that everyone falls to death eventually, even royalty and those in lofty, life positions.

Besides the vestments, church art and architecture were also reminders of death. Arguably the most famous macabre is Michelangelo’s Last Judgement in the Sistine Chapel. The fresco is behind the altar and portrays Christ at the end times. The people on earth are either being raised to heaven or brought to hell. Those in hell are being tortured and there are monsters and skeletons present.

Some churches such as Sedlec Ossuary use the actual skeletons of the departed as decor and fixtures such as chandeliers. Sedlec Ossuary is located within a cemetery. It is to show how the dead are present even at the Mass.

Catholic Macabre has found its way outside the religious realm and into a secular crossover. Most famously, in Mexico, the Day of the Dead is celebrated to remember ancestors who have died. This has been made even more famous in the 2017 film Coco. The holiday is celebrated on the same day as All Souls day. In the European world, a whole art form known as Danse Macabre emerged in the Renaissance and was prevalent up until the 1800s. Danse Macabre is an art of both illustration and music. Danse Macabre would personify death and would portray living people dancing and playing music with skeletons. The idea and image of the Grim Reaper emerged from this art.

How did a religion that is centered on the resurrection of Our Lord who trampled death become so obsessed with the gruesome mortality of man? Why does it seem like an oxymoron when Christ’s teaching focused on the life and dignity of the human person for Catholic Intellectual Tradition to develop a fixation with death? Like all traditions in the Catholic Church, there is a practical purpose and a spiritual purpose. Catholic Macabre would not have existed without the Black Death. Through the Bubonic plague, the Black Death caused the death of nearly half of Europe’s population. The art and lore of the time reflected the fear in the people’s hearts. This Catholic Macabre, however, is not accepting defeat to death but expressing a victory over it.

Catholic Macabre is a reminder of dignity and the importance of life; that it is a blessing to rise from sleep each morning. Overall, Catholic Macabre is not fear-mongering propaganda but a message to live life in the fullness of God’s grace. As strange as it seems, all the skeletons are not supposed to be gloomy. They are a reminder that life on earth is temporary and that heaven is eternal. The righteous have died on earth but are alive in Christ, hence all the bones in the Church. Death is something we all must face someday. One should live so that they are ready to reach paradise. It is important to be mindful of how we live our lives and that one day they will cease. Then in death, we enter more fully into that communion (in a permanent sense), because there is fluidity when we are members of the Church on earth, but in death, our decisions lock us into place.