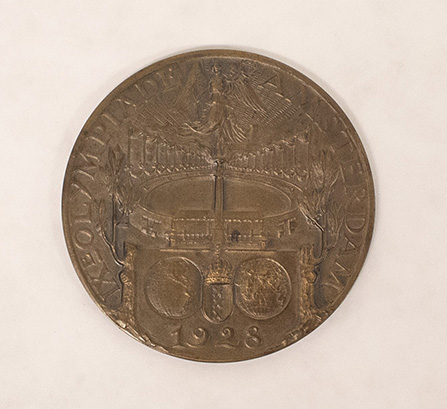 This Olympic qualifying medal and certificate were presented to Seton Hall University alumnus, Melvin Joseph Dalton, a member of the United States Olympic Team for the 1928 Amsterdam Summer Olympics.  Dalton ranked first place at the Olympic trials on Travers Island (Pelham), New York in the steeplechase run, making him eligible to compete in the summer Olympics that same year.  In the 1928 Olympic Games, he came in seventh place in the steeplechase, a grueling 3,000-meter obstacle race in which runners jump over four hurdles and a water pit.  Dalton’s personal best in the Steeplechase event had him clocking in at 9 minutes, 33 seconds.  Three Finnish runners took the gold, silver and bronze medals: Toivo Loukola, Paavo Nurmi and Ove Anderson.  Toivo Loukola set a new world record at 9 minutes 21 seconds – 12 seconds faster than Dalton’s personal best.  The men’s 3000-meter steeplechase event at the 1928 Olympic Games took place on August 1 and August 4.

The Amsterdam Olympic Games of 1928 were officially known as the Games of the IX Olympiad.  These games saw the participation of 2883 athletes from 46 countries competing in 109 events.  Athletes from twenty-eight nations won gold medals, a record which would stand for forty years, and it was the first time women were allowed to compete in athletics and gymnastics events. Women would not be allowed to compete in the Olympic steeplechase event until 2008 – 80 years after Dalton’s Olympic competition.  The 1928 games also witnessed the first lighting of the Olympic flame at an opening ceremony, as well as the establishment of the protocol of Greek athletes entering the stadium first, with host nation athletes entering last.

For video footage of the 1928 Steeplechase event in which Dalton ran, click here.

A native of Newark, New Jersey, Dalton attended Seton Hall from 1925 to 1929 and was later inducted into the University’s Athletics Hall of Fame in 1980.  Dalton ran track for Seton Hall as a student, and in 1925 was undefeated in all his college cross-country races and 2-miles track races. Dalton would later become a member of the priest community.