In respect of the recent commemoration of National Catholic Schools Week, Seton Hall has a long and honored tradition of hosting countless students who have their academic roots in parochial-sponsored classrooms across New Jersey and around the world.  Our institution is no exception to showing its support of pre-secondary level education.  Between 1901 and the late 1920s, Seton Hall established the Bayley Hall Grammar School initiative to help students prepare for more advanced study with anticipation that pupils would better continue their educational journey at the Preparatory Academy and College in subsequent semesters.

Founded by Msgr. John A. Stafford, President, the following overview is the first notice of the school with the details extracted from the 1901 Seton Hall College Catalogue and signaled a renewed look at youth-centered instruction after the school attained its first accreditation status four years previous . . . 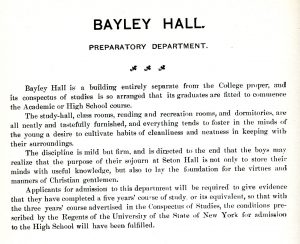 Over time, the Bayley Hall Grammar School received consistent support and regularly hosted an average of 40-50 students per academic year.  Over its approximately three decades in operation, the school prospered and by the mid-1920s, the description of the school touted its accomplishments, but also provided full disclosure in their approach in print as the following notice from the 1924 Seton Hall College Catalogue was heralded within its pages at a time when the institution was male-only and highly structured in almost every manner . . .

“BAYLEY HALL GRAMMAR SCHOOL – CHARACTER AND PURPOSE . . . in the few years of its existence has won for itself a position second to none among the preparatory institutions of the country.  It has its origin in the realization, forced on the President year after year, that many of the students who sought admission to the High School were, in some one or other of the required studies, inadequately prepared.  It was evident that a department which should take students at an earlier age and give them a thorough grammar school course would not only serve a useful purpose in itself, but would in addition facilitate the more difficult work of the High School.  This ideal has been fully realized.  The graduates of Bayley Hall have, almost without exception, demonstrated by their work in the High School the need and the value of the training given them in the preparatory department.

Such an institution has, of course, to struggle against the difficulties which inevitably arise when boys are for the first time taken from parents and home.  And it is in this particular that Bayley Hall has achieved its greatest success. The occupations of every hour have been so apportioned that mind and body are given useful work and healthy play from the morning bell at half-past is to the last bell at half-past eight.  Periods of recreation alternate with periods of study; every species of athletics is encourages, and every means is employed to develop a sound mind in a sound body.  One of the Reverend Fathers, resident in Bayley Hall, immediately supervises the work in this section.  The discipline is firm, as discipline must always be; but harshness is never permitted to mar the relations of teacher and pupil.  As in the other departments of the institution, the development of the moral character is looked upon as equally important with the acquisition of knowledge; and no pains are spared to lay the foundations of that combination of culture and religious virtue which constitutes the Christian gentlemen.”

The school building was named in honor of James Roosevelt Bayley (1814-1872), the first Bishop of Newark and hosted the Grammar School, hence the name of the institute and separate from the College proper.  As further described in the catalogues of the era: “The study-hall, class rooms, reading and recreation rooms, and dormitories are all neatly and tastefully furnished, and everything tends to foster in the minds of the young a desire to cultivate habits of cleanliness and neatness in keeping with their surroundings.”  Aside from the well-appointed surroundings, the model of having classes in one space led to consistency and a logical pattern of instruction.  The following synopses provide the typical path of pedagogy found among the first three years encountered by the Bayley Hall student of yore . . .

GEOGRAPHY.  The United States and Territories.

LITERATURE.  Selections in Prose; Spelling and Analysis; Studies in Etymology and Use of Words; Word Formation. 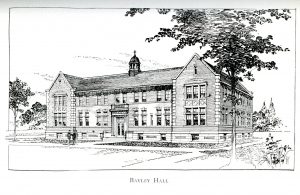 As the individual progressed through the system, they reached the end of their time at Bayley Hall during the Eighth Grade.  It was at this point, that pupils had the option belong to a host of clubs and societies including the Athletic Association which promoted competition in billiards, handball, and competition between neighboring schools.  The Library Association was active in collecting and establishing a top flight reference center for the student body.  In addition, the Saint Aloysius Society hosted weekly meetings in order to: “. . . instill into their minds an appreciation and tender regard for this illustrious patron of the young.” Which offered many students a preview, and a wider selection of extra-curricular activities when the reached the high school level.  This was designed to educate the “whole person” as consistent with the goals of the instructors and administration from the start of the program.

The parting wish for graduates from Bayley Hall when they entered the Eighth Grade led to the following prescription:  “The object of this organization is to transact the business of the class, to foster in the pupil the idea of self-reliance in the management of his affairs, and to prepare him for the more formal organization of the High School and College classes.”  Although long defunct, the legacy of the Bayley Hall School lasts and remains a part of the history of Catholic parochial education annals and within the story of specialized schools hosted by Seton Hall over the last century and a half.

For more information on Bayley Hall and other aspects of Seton Hall history please feel free to contact us via e-mail at: archives@shu.edu or by phone at: (973)275-2378.