When it comes to understanding print culture and erudition potential in seventeenth century Ireland this era provided an early look at how published communication would take on deeper and more wide-spread significance over time  As scholar Raymond Gillespie noted in his work – Reading Ireland : Print, Reading and Social Change in Early Modern Ireland (Manchester University Press, 2005)  he wrote that the early-mid 1600s was a burgeoning and “revolutionary” time in the Irish publishing industry which fit natural learning objectives and needs.  In other words . . .

“The conditions of print for instance, instructed their followers how to read the Bible, and lawyers and politicians thought they knew how statutes could best be read. These social, political, economic, institutional and cultural frames which surrounded both reading and printing provide a point of departure in understanding the world of print in early modern Ireland.”

Gillespie went on to note that this was an era when the oral tradition was giving way to a growing print culture.  In addition, those of the middle and upper class typically viewed manuscripts as “sources of authority” when it came to the recording and transferal of information as found on the printed page.  The status symbol of collecting books was rated high among those who had the means to purchase and preserve them.  Gillespie went on to add that . . .

“Books by their ability to spread ideas, in conjunction with manuscripts and the spoken word, could be either socially cohesive or disruptive. They also had another more tangible social attribute since the book as object also had the power to carry a wide range of messages. The collecting of books for display in private libraries, for example, was seen as an indicator of social status. A large library, whether read or not, could act as a sign of learning, or pretention to learning.”

With this context in mind, latter day scribes, publishers, and book collectors have provided the foundation for libraries and related information centers to promote educational support on various levels including that of our Irish texts holdings at Seton Hall University.

Since the early 1950s, the library of noted writer and bibliophile Meagher Joseph (M.J.) MacManus (1888-1951) have been housed on the campus of Seton Hall University.  The diversity of the titles collected during his lifetime numbered in the thousands and have been the core of a consolidated Irish-centered collection that actively serves our research community to this day.  The vision of MacManus went back centuries and covers a wide-range of subject areas with a particular emphasis on history, biography, political science, and religion among other themes that make up the Irish experience.  There were also no limits imposed on how old the books had to be when it came to building his substantial library.  With this in mind, the lasting legacy of his bibliography contains volumes dating to the 1600s and leading up to his untimely death during the early 1950s.

Among the three oldest surviving volumes found in our combined Irish collections are ones found in English, French, Latin, and/or Irish with each constituting their own story within a story based on the content and what the seventeenth century reader learned and what remains by way of reference text for the reader of these works.  Included are the following examples . . . 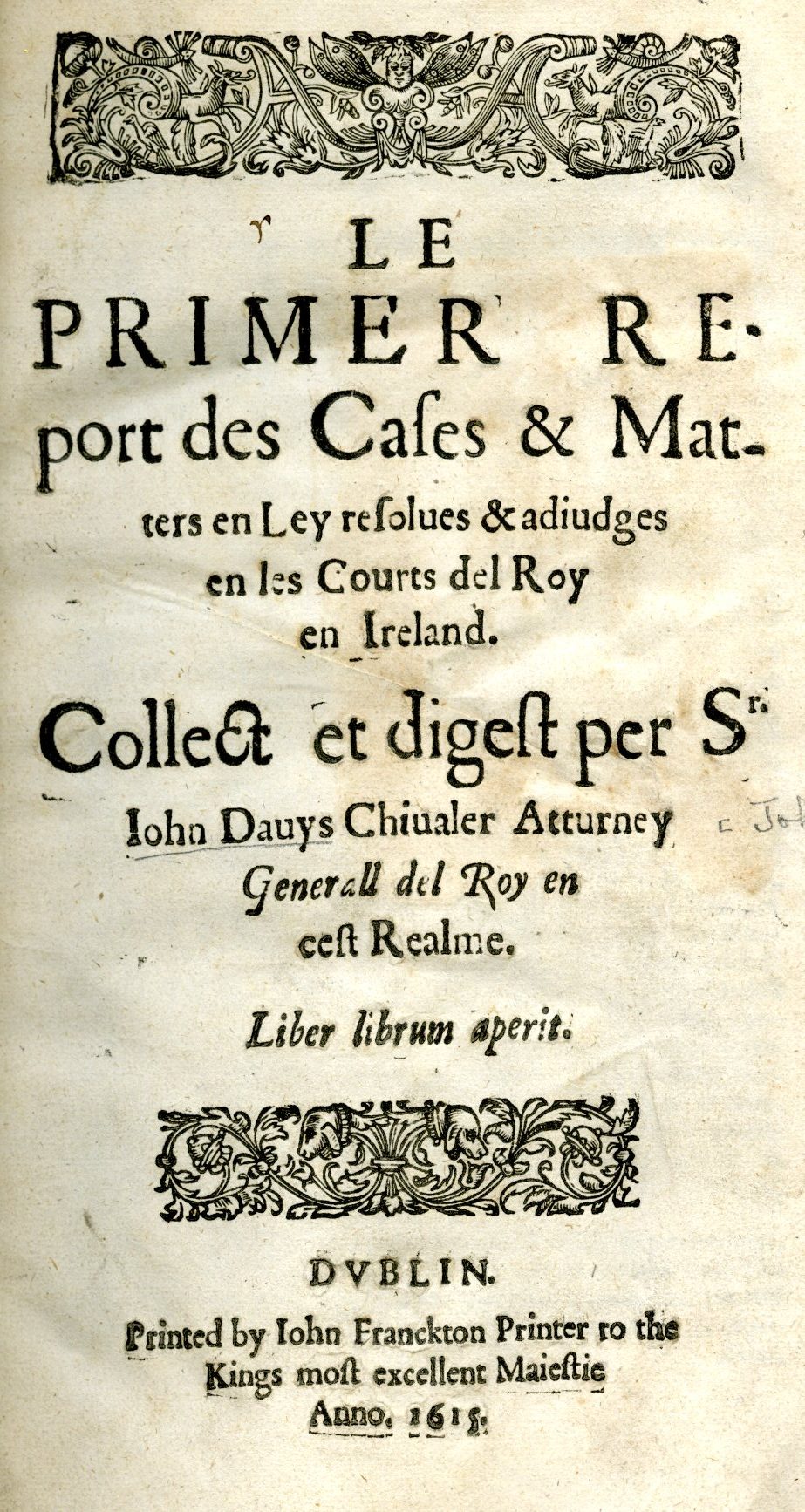 This work was a French language publication and translates to – “A report of cases and matters in law: resolved and adjudged in the King’s Courts in Ireland [1604-1612]” in the English and is a legal review and digest-oriented volume.  The monarch who ruled over Ireland during this time period was James I (1566-1625) who reigned over Éire from 1603 until his death two decades later and held jurisdiction over the isle during the time this work came to light.  This text was also one of the earliest legal reference works of any type found in our holdings catalog. 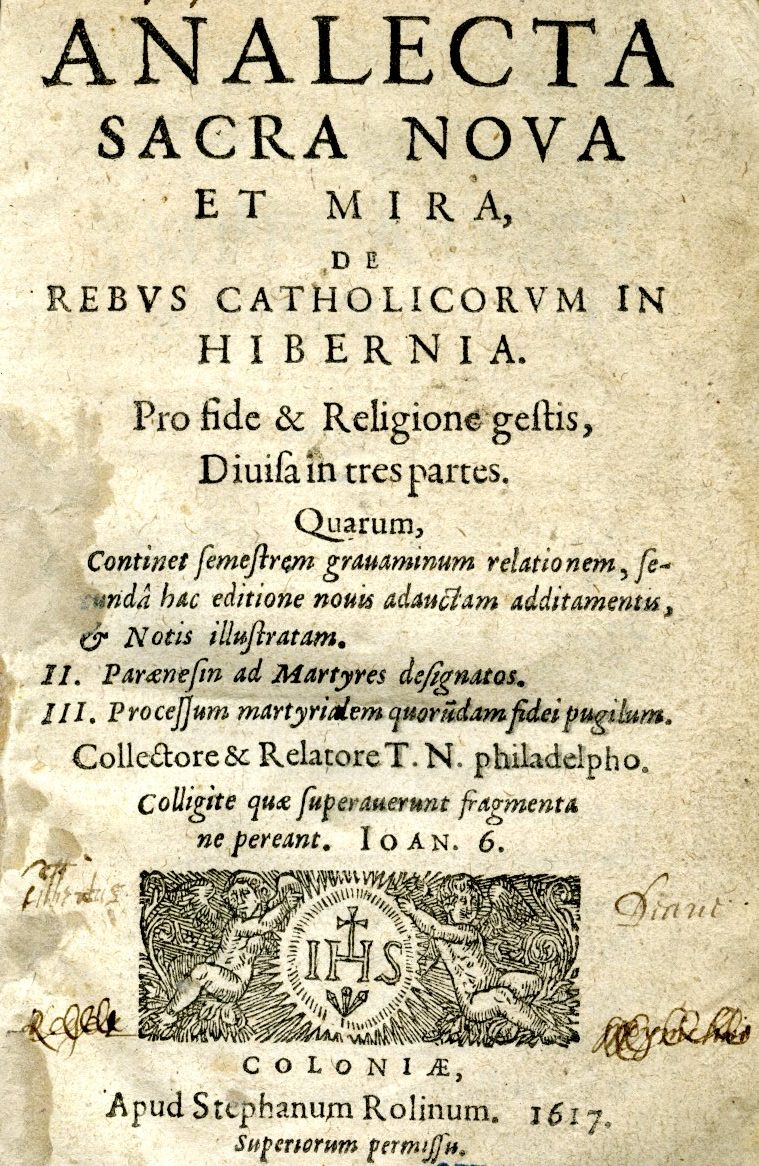 An early Latin text related to Ireland when translated into English reads – “(Analecta sacra) and for the faith of the new religion in Ireland, and, the marvelous tales of the deeds of the things Catholic, divided into three parts, one of which contains the six months old burdens the relations of 1. the second edition of this new (adauctam) additions in terms of (notis) illustrate, 2. (paraenesin) to the elect, and the martyrs, 3. the process of martyrialem (Quorum dam) of champions.”  Among those named in the text are Dermod O’Hurley and Richard Creagh, Archbishops of Cashel and Armagh and Primate of Ireland respectively who exercised spiritual guidance to their congregations during the early-mid seventeenth century and provides the researcher with a review of early Irish ecclesiastical history. 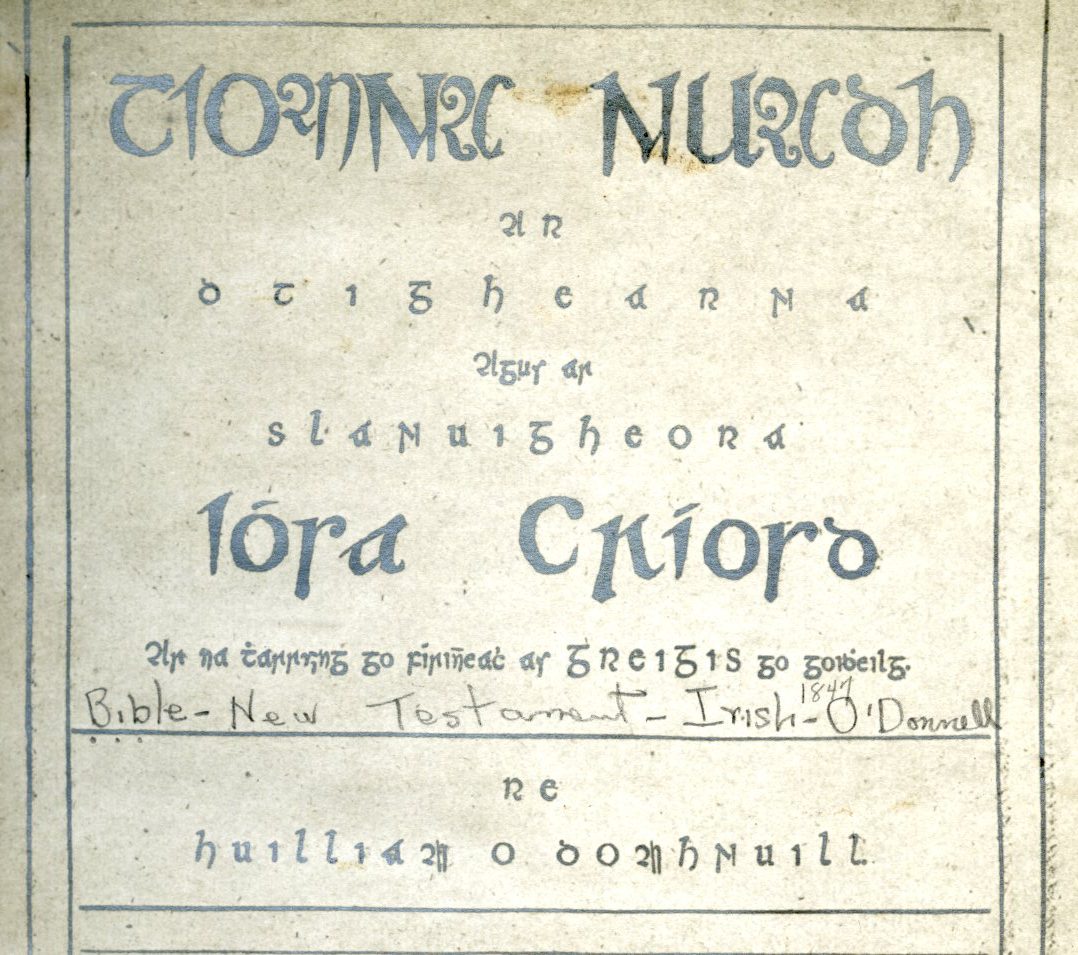 This tome when loosely translated into the English centers upon the “New Testament and Our Jesus Christ” as its central theme.  The book proper was financed by a gentleman by the name of Robert Boyle (1627-1691) who also served as editor of the work.  The rarity of Irish language works within our collection (and beyond) was based on limited economic opportunities, total number of Irish readers, and problems with surplus storage among others factors that faced those who had no access to these specialized writings.  However, certain texts such as these were connected to religious reference and in the vernacular of the citizenry at large.

Within the broader context of Irish history, these books were published a few decades after the Nine Years’ War of 1594 and the flight of Hugh O’Neil and Red Hugh O’Donnell against Elizabeth I in Ulster, establishment of the Plantation of Ulster by Scottish Presbyterians in 1607 and a prelude to the Irish Rebellion of 1641.  From here further works were produced that highlighted circle of life in Éire representative of the leaders, religious, and others who contributed to its historical development overall.