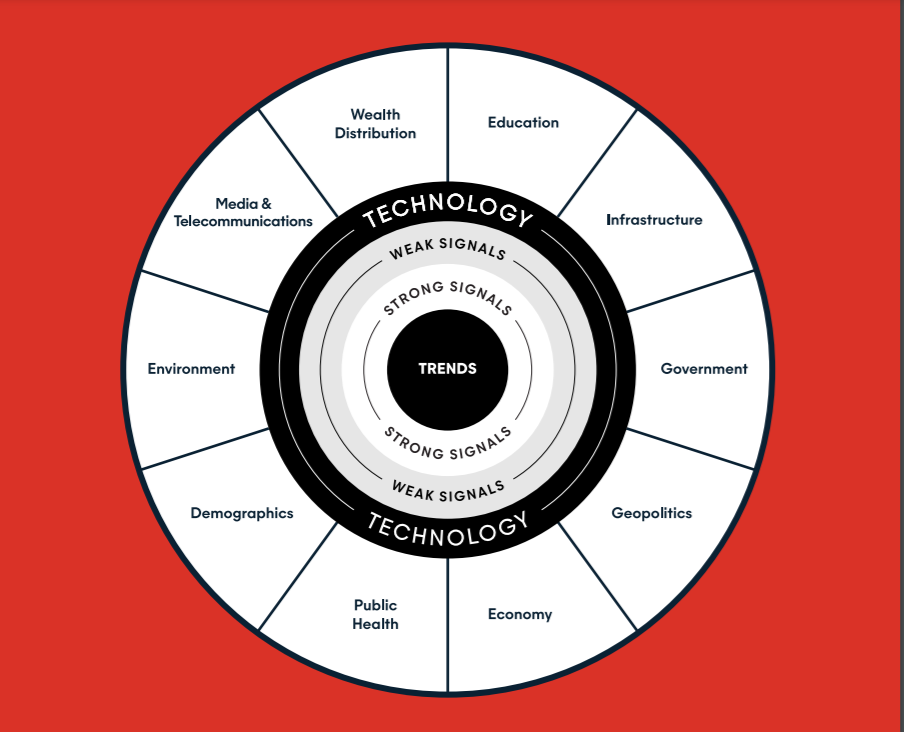 Signals serve to indicate emerging changes in different technologies. The signals can either be weak or strong, with weaker signals developing from the technologies emerging from macro forces and strong signals beginning to better outline the emerging trends in society. This means signals are of utmost importance and serve as early indicators of what’s to come in the future. During this signal analysis, I will outline various signals regarding robotics in relation to their macro forces. 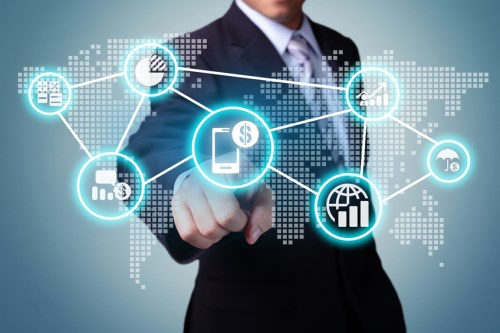 The distribution of income between the top bracket and bottom bracket in the economy is known as wealth distribution. In the beginning, robots were only affordable to the extremely wealthy individuals within a society. Many early uses of robotics, such as automation in factories, were dismissed as either a business venture or something only affluent people could afford. However, as being witnessed now, robotics is becoming more affordable and will serve to enter all households. Whether this is through the Amazon Astros, vacuum robots, or even intelligent software installed in a home. Eventually, in the near future, robotics will be an affordable device that most households have in one form or another. 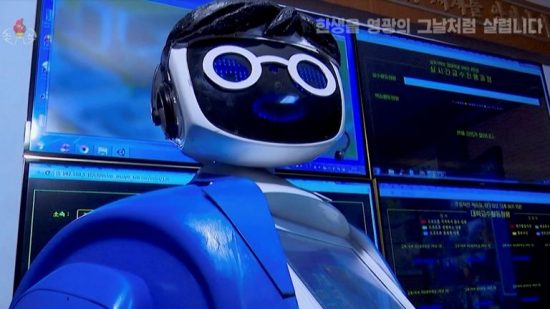 In terms of education, society has seen a year-by-year increase in the number of students entering STEM programs or preparing for STEM careers. This was an early signal of the oncoming importance of technology. Additionally, we see robots entering the education realm as teachers. In North Korea, they have launched robots that aim to “teach educational technology that enhances children’s intelligence.” This serves as an early signal for the power robots weld if they are able to take the teacher’s role in a classroom setting. As we see robots in these schools, we can see robots pivot to teaching in other areas of academia as well. As the emotional AI in robots is developed and they learn how to react in different situations, the future of robotics in education is unlimited. 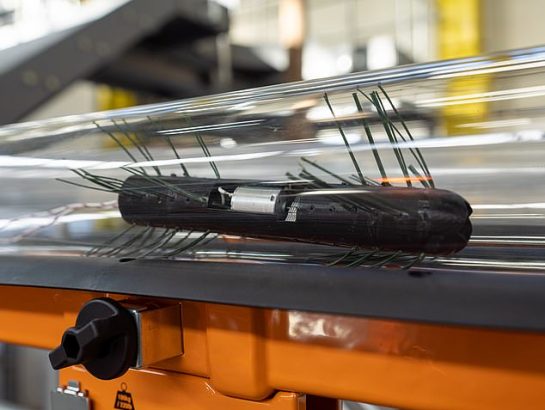 Robots serve to provide convenience and reduce the excessive amount of time some jobs can take. This is especially true for infrastructure, which consists of roads, bridges, wi-fi towers, and any means of delivering goods from one area to another. There are many infrastructure jobs that presented high risks, such as jobs where workers were put on high buildings or in dangerous electricity situations. With the introduction of robots, we see innovations such as the company BT building mole robots that can sig under roads to lay broadband cables. Additionally, the supply chain and logistic field have innovations such as self-driving trains, trucks, and drones on the horizon. These methods of transportation will serve to ease some of our supply chain bottlenecks in times of crisis, but also have the potential to be hacked and rerouted, which could cause serious issues. 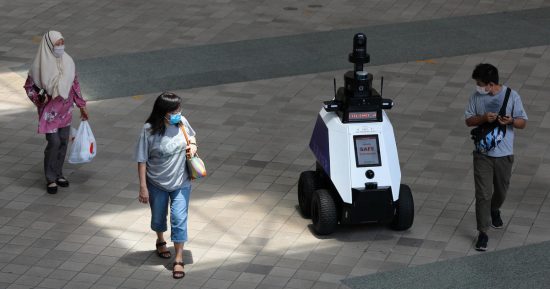 Robots can help to make citizens more aware of their responsibilities and can even help to enforce those responsibilities. Much like what we see in Singapore with surveillance robots, robots can be utilized to enforce government policies. In Singapore, Robots will patrol residents and let them know when they are violating basic rules, such as smoking in prohibited areas, parking bikes in the wrong areas, and not adhering to social distancing. In the future, most governments can adopt robots to enforce basic rules like this. However, there have infamously been issues with robots and their racial bias, which would present an issue in a robot-regulated society. 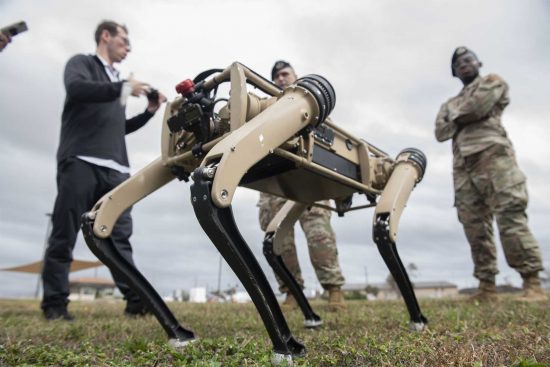 The most recent geopolitical signal was the launch of robot dogs with rifles on their back. These robots provide an effective and deadly alternative for combat within wars. This signal shows that the future of war will look very different in the future. Robots have the potential to fight wars completely independent of humans. However, the autonomous nature of robots must be perfected in the future. These war robots would need to be controlled and be able to accurately sense threats from innocent people. Additionally, in terms of world regulations on this technology, none currently exist. It is important to globally decide the limits of what robotics should be allowed to do since if unregulated robots could be the ultimate demise of the world. 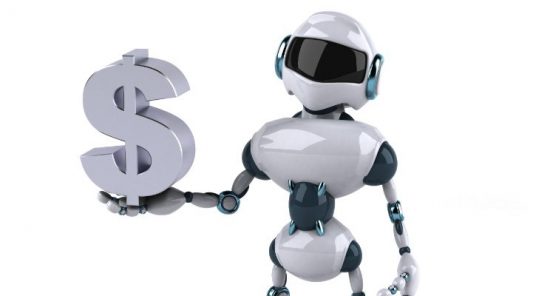 Robots are both beneficial and detrimental to society at large. Robots are simply reducing the number of jobs that require low skills. With this, robots will create more jobs that require higher skills and thus result in higher income. Robots could push a future where high skills are required, which in turn would create a population that is more affluent and less below the poverty line. Additionally, robots have the potential to create products and services at lower costs, which means the cost of living over time has the potential to decrease. With the cost of living decreasing and the average income set to rise over the next few years, robots can set the scene for a prosperous economy. However, while this may seem like a benefit, it is important to acknowledge that many working-class citizens will not be able to achieve higher education and receive the skill sets necessary to thrive in this economy. This is where the concept of a robot tax comes into play. The robot tax is the idea that companies or industries that opt to replace employees with automated workers and robots should be required to pay a tax for this. This tax could equalize the costs of utilizing robots in place of paying a human worker to do the same job and could potentially save humans their jobs. 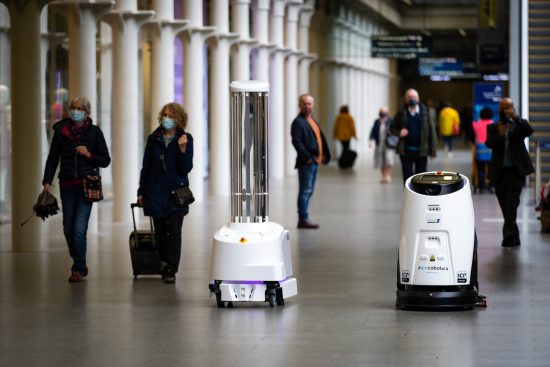 In terms of public health, robots are helping to monitor and improve the health of individuals. A major area this has been seen lately is in sanitation robots that are preparing to help keep public areas clean in a post-COVID society. In terms of COVID, robots have been incredibly helpful in providing contactless delivery to help eliminate the spread of the virus. Additionally, robots are being employed throughout various healthcare facilities to monitor, sanitize, or provide care for individuals. Outside of the work functions of robotics, robotics is also being used in developing limps for amputees that are extremely responsive and real. Robot arms are now being made to look and feel more real with synthetic muscles. Additionally, in the future, robots can be developed to monitor health by performing routine scans of the body from the comfort of an individual’s own home. Much like IBM Watson, these scans could then go on to identify any potential illnesses and maybe even make a diagnosis. 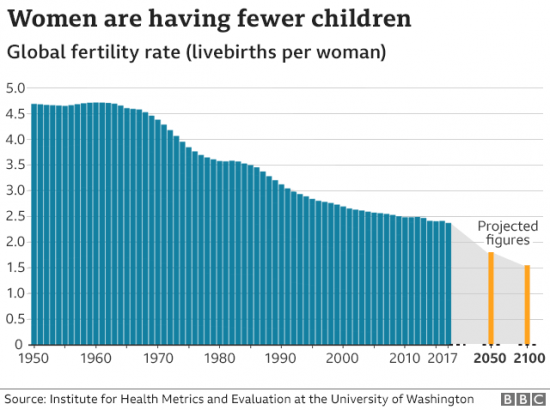 A larger trend in motion for demographics is declining birth rates. There is a large portion of the working class that is planning to make their exit soon, and the following generation is not large enough to replace them. Many people say that robots will take jobs away from humans; however, robots will also provide the much-needed relief to labor shortages that are occurring in the economy. The U.S. Bureau of Labor predicts that the labor gap will widen to nearly 2.4 million unfilled positions within the next 10 years. Robots can be the solution to this. Since robots are programmed to do specific jobs and can be massed produced in unlimited supply, they can ensure that the economy keeps moving even if the global populations continue to decline. 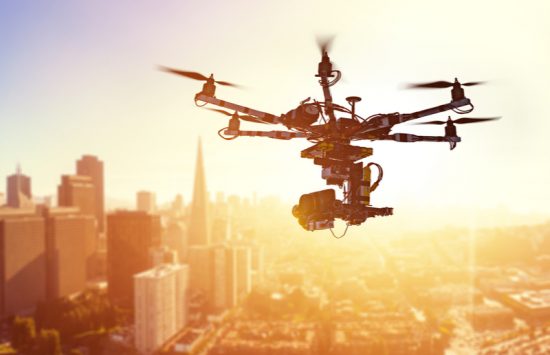 If anything is going to wipe out humans, it’s climate change. This is probably one of the most terrifying challenges facing the world today. This is because of the depth and reach of the root of these problems. It’s impossible to find the manpower (and funds) to police every organization, “recycling” company, or anyone emitting a footprint. However, robots are the most efficient and effective solution to this. They can not only monitor the environment, but they can actively assist in cleaning efforts. For example, robots are being created to clean oil spills, lower carbon emissions in a factory setting, and even to study climate in areas that are hard for humans to reach. Additionally, agriculture is another environmental domain being hugely affected by the next wave of robotics. Currently, America is extremely codependent on other countries to produce the products necessary to feed our country. However, with the help of robotic technology, American can position itself to grow plans anywhere with not much human capital. An example of this is Iron Ox, which is a California startup that utilized robots and greenhouse to grow crops. A self-driving robot moves produce where it needs to go while a sensory robot will lift plants out of the water to inspect the roots and measure levels of nitrogen and acidity. Robots’ role in growing agriculture will be integral to maintaining a healthy carbon footprint and being able to feed the many populations of the world. In the future, robots will be the way in which humans communicate with one another. This communication will be enabled through 5g networks and eventually enabled through 6g. This network will power smart home systems that already exist in homes. However, smart home systems will grow to become better equipped with robotic technology, such as cleaning robots and home security robots that can perform simple tasks. These robots and home network systems will be responsible for what news, social networks, and information household units receive. Additionally, these technologies will allow household units to connect with one another via phone calls and the metaverse. Additionally, as Meta announced their vision for the metaverse, robots can have a huge hand to play in this. With the advancement of AI, a robotic skin has been made that could enable humans to feel virtual occurrences from within the metaverse in the physical world. While robotics is laying the foundation for an exciting new frontier of communications, it is important to consider the disregard for privacy that can come with this new vision and the privacy standards that should be locked into place.

Technology is all-encompassing of the other macro changes. Technology is the basic level at which most signals develop since it is the connective tissue that links the individual, household, business, and global economy together. Some of the main technological developments that have led to the trends witnessed in robotics are the IoT, cybersecurity, surveillance capitalism, big data, AI, machine learning, speech recognition, edge computing, computer vision, blockchain, and many others.