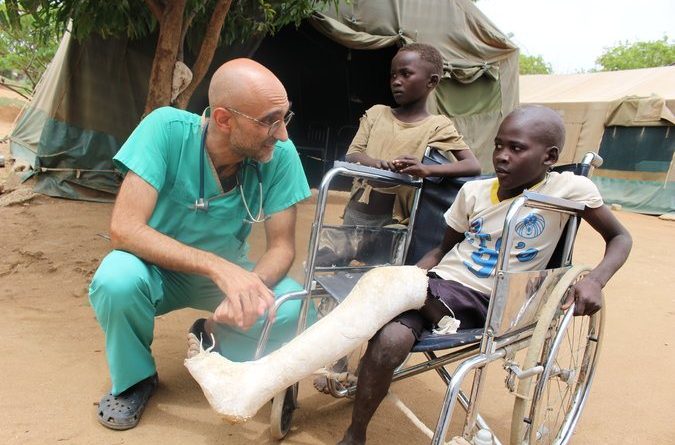 The Nuba Mountains in Sudan constitute a rain-fed, arable haven amidst the surrounding Sudanese desert. The region has no roads, and ancient footpaths connect villages that support dense populations of the indigenous poverty-stricken Nuba people. A relentless rain of bombs exacerbates the difficulties of agrarian life, and sends the Nuba people scrambling for cover in caves and riverbeds, reports BBC.

Into this maelstrom stepped the Catholic missionary – doctor Tom Catena – a native of Amsterdam, New York, former college football star at Brown, and mechanical engineer by training. In explaining his motivation for ministering to these people in Kenneth Carlson’s documentary, “The Heart of Nuba”, Dr. Catena recalls Mark 10.17-31, wherein a rich young man who follows all the commandments walks away from Jesus, dejected, after Christ told him he can get to heaven by selling all his goods, taking up his cross, and following Him.

According to ABC News, Dr. Catena took these words literally, enrolling at Duke Medical School after college, serving in the Navy for five years, and performing nearly 2000 surgeries in Kenya before setting out for the Nuba Mountains.

In keeping with the Catholicism that infuses and animates his life, Dr. Catena opened the 435-bed Mother of Mercy Hospital in the hamlet of Gidel, where he alone treats a population of one million for everything from childbirth to leprosy and pediatric kidney cancer. National Geographic estimates the hospital’s catchment area—or area from which patients come—at a third of the province of South Kordofan, a region the size of Austria.

Nicholas Kristof, a New York Times columnist who went to visit Catena in 2015, reports that a local Muslim paramount chief equated Catena with Jesus Christ, who devotes every day to healing the sick, helping the lame to walk, and helping the blind to see.

The Sudanese government has not taken well to Dr. Catena’s ministry. In 2014, the Sudanese military bombarded the hospital’s area with eleven bombs and rockets, blasting doors off their hinges and inflicting shrapnel wounds—but, thankfully, no death—on some patients. When the planes came, the missionary-doctor took refuge in a freshly-dug latrine pit, and came back to discover his 300 adult and 50 pediatric patients in total shock.

Dr. Catena had grown accustomed to treating the Nuba people without reliable running water, electricity, or basic medical technology, but had not yet faced direct targeting by the government. He responded by building foxholes all around the hospital, and training his limited staff of nurses to evacuate patients.

The attacks on the hospital signal an escalation in the Sudanese government’s campaign against the Nuba rebels. According to Dr. Catena’s interview with National Geographic, the military had first sent out unmanned drones on a reconnaissance mission to the hospital grounds.

Much of the fighting takes place north of the hospital, and Dr. Catena sometimes receives groups of four or five casualties. The military has retaken some villages on the lower slopes of the mountains by shelling them to the ground and driving their inhabitants to seek cover farther up. Many of these make it to Mother of Mercy Hospital, where shrapnel wounds and malnutrition are becoming more prevalent.

Meanwhile, government forces have begun targeting trucks full of medical supplies traveling along the dirt road from South Sudan. Dr. Catena speculates that the military wants to terrorize the Nuba people and break their insurrectionary morale, while restraining its operations so as not to worsen Sudan’s economic relationship with the West.

Despite all this, Dr. Catena must take solace in Luke 17.33, “Whoever tries to keep his life will lose it, and whoever loses his life will preserve it.” He plans to stay in with the Nuba, with his local wife, so long as there is a need for his ministry. Given the circumstances, that need does not look likely to fade anytime soon.