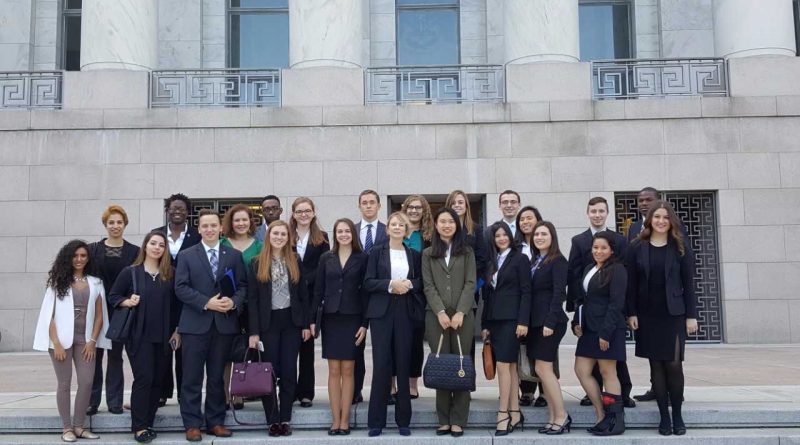 The first visit of the day was the Rayburn House Office Building, which holds offices for the members of the House of Representatives. John Jones, chief of staff to Congressman Emanuel Cleaver, met with the students, providing a detailed story about his successful career.

Jones moved overseas to Denmark early in his career, where he served for the Organization for Security and Cooperation in Europe (OSCE). Later in his career, Jones worked on former President Obama’s 2008 campaign, where he discovered working hard “is all that matters.” Jones also has a background in writing security, energy, and foreign affairs policy with Senator Chuck Schumer, and working on the Clinton-Kaine transition team. When asked about the multiple career opportunities he took and how they will influence his future in D.C., Jones implored the students to “focus on the now” to continue the path to more success.

The students continued their travels to the Woodrow Wilson International Center for Scholars, where they met with Dr. James Person. Dr. Person called himself a “student of North Korea,” referencing his specialization in the so-called “hermit country,” and its relationship to the United States. Dr. Person spoke at length on the United States’ relations with North Korea, commenting on the rising tensions between the two countries. A notable point of his speech was when Dr. Person commented on current questions regarding whether the DPRK has the nuclear capabilities necessary to attack U.S allies, Guam, or even U.S. homeland. Dr. Person emphasized that instead of questioning whether North Korea can strike, we should instead ask why they would in the first place.

Later in the day, Roberto Amorosino, senior HR specialist at the World Bank, spoke to students about recruitment and the purpose of the organization. Amorosino listed two specific goals of the bank: one, to end extreme poverty, and two, promote prosperity in developing countries. The World Bank also “values diversity,” which is expressed through its 2020 gender-balance goal. The goal not only encourages greater workplace equality between men and women within the World Bank, but also seeks to exemplify a better model to organizations in the hope they will adopt it as well. Amorosino also emphasized “research and learning,” referencing not only the work of the World Bank, but the broader responsibilities of a career in domestic and foreign service.

After a half-hour break exploring the surrounding area, students headed to the United Nations Foundation. Dr. Katherine Dalpino, professor at Seton Hall University’s semester in Washington D.C. program, offered helpful advice on making a career in D.C. She emphasized that, in order to get started in politics, “you absolutely need D.C. in your life.” Dr. Dalpino also highlighted that the skills one acquires in D.C.—such as negotiation tactics—are useful in other fields too. Finally, Dr. Dalpino quoted Woody Allen, saying, “showing up is 80% of it,” referencing the risks many students take when they drop everything and move to the nation’s capital without a job lined up.

Overall, the students were given the opportunity to create contacts, network and learn more about the complex world that is Washington D.C. After twelve hours, four stops, many cups of coffee, the students, along with Dr. Ruby and Mr. Younger, boarded the bus back to Seton Hall University.

Special thanks to the School of Diplomacy and International Affairs for coordinating the inspiring trip to the nation’s capital, and more to John Jones, Dr. James Person, Roberto Amorosino, and Dr. Katherine Dalpino for their hospitality. 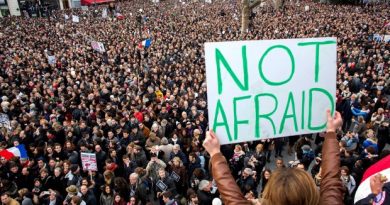