Jenna Leis, a junior Diplomacy major, secured an internship with Médecins Sans Frontières (MSF), the nongovernmental organization known as Doctors Without Borders, for the Fall 2016 semester. As an intern at the public events office, which falls under the communications department, she spent three days a week at MSF, and the rest of the week taking classes at Seton Hall.

Her main project was an interactive exhibition called Forced from Home (FFH) presented by MSF to raise public awareness about the experience of the world’s refugees and of the aid workers who help them. “My responsibility was to do community outreach in the areas the exhibition was being held and promote the event and find volunteers to take part,” Jenna said.

In addition, because her boss and the rest of the public events team were following the exhibition around the Northeast, she was their contact in the New York office. “I would attend staff meetings and give updates on the project for them and report back,” she said.

When Jenna was not working on FFH, she was responsible for matching speaker requests from medical conferences, universities, and other conferences with an aid worker who could present on their experience with MSF. If requests required any materials like newsletters or informational booklets, Jenna would prepare them and send them out.

On a typical workday, Jenna took a train from South Orange to New York. “Once I was there, I would get my coffee and breakfast on my way to the office. I was lucky because the office was only a five-minute walk from Penn Station,” she said. Upon arriving in the office, the first thing she would do was check any urgent emails that needed attention, then prepare materials for packages that needed to be sent out. “If my boss was in the office that day, I would make sure to go check up with her to see if she had anything she needed me to take care of,” Jenna said, demonstrating industriousness.

The majority of Jenna’s day was occupied with looking for organizations and universities who had students interested in volunteering at MSF events. Since Jenna did not have the workload of a full-time MSF employee, she would often finish her tasks early, allowing her to move on to help other departments. “I would help edit newsletters that would be published in our official monthly paper for the editorial department,” she said, as well as participate in focus groups for the foreign human resources department.

The atmosphere at MSF was very friendly. “Everyone was always happy to see each other,” Jenna said. While it was a big office, there was still the feeling of a close-knit group, especially with the interns. “We would often bring our lunch back to the office just so we can eat with each other,” she said.

In addition, Jenna stressed that it was an environment that encouraged learning about different parts of the organization beyond one’s own assignment. “Every week there was something called a Brown Bag Lunch, where there was a presentation from a different department in the office around lunchtime,” she said. “One week it was from someone in fundraising, speaking about their upcoming events; the next week would be a video about an aid worker spending a few months in South Sudan with interactive portions.” Jenna shared that it made going to work exciting because she never knew what was going to happen in a single day.

Jenna considers contributing to an organization that does important work around the world as the best part of the internship. Before the internship, Jenna had some general knowledge about MSF, but working there opened her eyes to each of the different campaigns MSF works on. “One specific event that was a highlight was in the beginning. I was helping my boss run a panel discussion on the Global Refugee Crisis and international policy and the moderator of the panel was a journalist, Ann Curry,” she said, adding that she was even able to ask Ms. Curry a question during the discussion.

Although Jenna enjoyed the internship, she considers the commute from Seton Hall to Manhattan challenging because she had to be “able to balance school while commuting to and from New York City.”

Jenna believes her campus involvement as a member of the Student Activities Board (SAB) played a big role in her selection. “I think it was a mix of my classes and extracurricular activities that helped me to get the internship in the first place,” she said.

During the internship, she saw how lessons in the classroom applied to a real-life job.Being able to attend meetings and briefing departments allowed Jenna to develop her presentation skills. By spending a lot of time doing outreach programs, Jenna also became more comfortable with reaching out to people, a task she “would normally be too nervous to do.”

“I got a feeling for what life was like in the professional world,” she said. 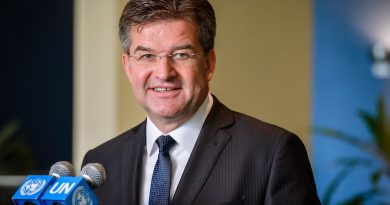