The windows of St. Patrick’s, with the exception of those in the sacristy, the vestibule and the transoms, were installed in 1925 and, according to newspaper records, made in The Netherlands. More than likely they were made in Germany and shipped from The Netherlands. The Netherlands is not well known for the manufacture of stained glass, while Germany is renowned for the quality of its stained glass. It is possible that the wide-spread anti-German feeling engendered by World War I occasioned hiding the true origin of the windows.

Beginning on the right aisle facing the sanctuary, starting at the sanctuary, and going to the rear of the church, the windows follow the Gospel account of the life of Christ and the events of the redemption.

The windows are typical of the Gothic Revival of the 19th century, which reproduced the style of European cathedrals and churches of the Middle Ages, the eleventh to 15th centuries. Each consists of a white frame that replicates in glass a stone or marble gothic window frame. The portrait often includes another window looking out on a landscape scene.

The portraitists of the Middle Ages did not have an “historical sense” in that they did not know how people would have dressed at the time of Christ. The dress and accoutrements are products of the medieval imagination and are not meant to represent clothing of the time of Christ. The persons depicted are likewise very European in appearance. You will note that in many of the windows the children often are blond. The average Judean 2,000 years ago was not blond. We should not be surprised at this. It is a very human desire to be like those whom we venerate.

As you examine these windows note the golden candle sconces and crosses on the walls. These twelve candles may only be displayed in a church that has been formally consecrated. They are lit on the anniversary of the consecration of the church. St. Patrick’s was consecrated on March 17, 1875.

Mary is at the center by her kneeler at prayer. The Angel Gabriel with multi-colored wings is speaking to her. The lilies in the vase near Mary and in the hand of the angel indicate purity. The Holy Spirit in the form of a dove appears above Mary and the angel. Through a window we can see a landscape and a towered building. Mary’s head is uncovered, an indication of an unmarried woman. In the subsequent windows her head will appear covered, denoting her status as a married woman or a widow. Only in the last window will her head once again appear uncovered. There is a small statue of King David with his harp on the kneeler indicating that Mary and Jesus are descendents of David.

This is the only window in the church with a dedicatory inscription. It reads: “In Memory of the Dead of the Parish — R.I.P.” The letters “R.I.P.” are the abbreviation of the Latin Requiescant in Pace, “May they rest in peace.’

The child Jesus is at the center. Around His head is a nimbus, or halo. Inside the halo is a cross that indicates his future crucifixion. Mary and Joseph are gazing at him. A cow peers over Mary’s shoulder. Joseph holds a lamp in his hand. The shepherds adore the infant Jesus. One of the shepherds carries a lamb on his shoulder, perhaps a sign of Jesus’ future sacrifice and his role as the Good Shepherd. Another has a shepherd’s pipe in his belt. Angels hold a scroll on which are the words Gloria in excelsis Deo, “Glory to God in the highest.” In the upper left we can see the “Star of Bethlehem” that would lead the Magi to Jesus.

The Presentation in the Temple 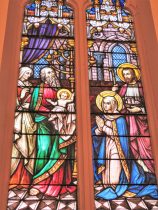 Mary and Joseph present the child Jesus in the Temple of Jerusalem. Joseph is carrying a cage with two pigeons, the sacrifice of a poor person. The temple is in the style of a Gothic church. With them are Simeon, holding the child Jesus, and Anna, as recounted in the Gospel. The menorah, or seven-bran

ched candlestick, a symbol of the Jewish faith, is in the background.

The Wedding at Cana 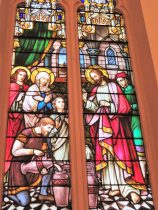 The wedding is taking place in a Gothic building. Through the window we see a cypress tree and a tower. Jesus and Mary watch as the servant pours the water to be made wine into the jars. Among the watchers are the anxious groom in the center, the steward wearing a red cap, and a young man with a halo, who probably is St. John.

Jesus and the Little Children 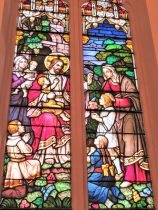 Mothers bring their children to Jesus who welcomes them. One child brings a gift of flowers. Interestingly all but one of the children are blond. One has pigtails tied with a yellow ribbon. In the upper left we see a vine, perhaps a sign of the Eucharistic sacrifice to come. The ground is beautifully strewn with colorful flowers.

Symbols of the Evangelists

In many churches we find the four evangelists depicted by the face or figure of a man, a lion, a calf or bull, and an eagle. The origin of this iconographic convention has its roots in the visions of the prophet Ezekiel (1:4-6, 10) and the vision of John in Revelation (4:6-7). In the first centuries of the Church these four images became symbols of the four evangelists. Each image is representative of the opening passages of the individual Gospels. There is some variation as to which creature represents which evangelist. Irenaeus and Jerome differed in assigning these images to the evangelists. The version espoused by Jerome survived the test of time.

MATTHAEUS – St. Matthew is represented by a young man with a halo. In our window he is winged and appears to be an angel. This image is drawn from the opening of Matthew’s Gospel, which begins with the genealogy of Jesus. Matthew’s use of this human genealogy demonstrates the humanity of Jesus.

JOHANNES – St. John is represented by an eagle with a halo. The Gospel of John soars like an eagle as its opening verses proclaim Jesus to be the Word of God.

Moving across the rear of the church to the left aisle we continue.

Symbols of the Evangelists

MARCUS – St. Mark is represented by a lion, also winged and with a halo. In the Gospel of Mark the preaching of John the Baptist is portrayed as a voice crying, almost roaring, in the desert, “Prepare the way of the Lord.”

LUCAS – St. Luke is represented by a winged bull with a halo. After his preface, Luke mentions the priestly office of Zechariah. Since the calf or bull in the Old Testament was a sacrificial animal for the priest, this image is applied to the Gospel of Luke.

The series of windows now moves to the events of Holy Week.

Jesus is at the center of the table. The apostles, some elaborately garbed, are grouped around Him. On Jesus’ right, we see the bald and bearded St. Peter, on Jesus’ left, the young St. John, the “Beloved Disciple.” In the rear we can see Judas, hooded and furtive, leaving the meal while clutching the purse containing 30 pieces of silver.

The Agony in the Garden 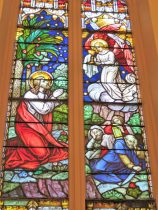 Jesus is in the center. An angel holds a cup, reminding us of Jesus’ prayer that the cup of suffering might pass but that the Father’s will be done. The sleeping apostles are near Jesus. Peter is shown with a sword. When the soldiers and the high priest’s servants came to arrest Jesus in the Garden of Gethsemane, Peter cut off the ear of one of the servants. Jesus then healed the man. The setting is beautiful, a tropical garden with palm trees under a night sky studded with bright stars. The moon, which is depicted with a face, peeks from behind a palm tree. 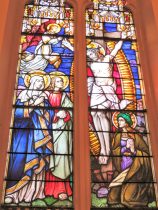 The pale dying Christ is mourned by the sorrowful Blessed Virgin, St. John, and the kneeling St. Mary Magdalene. Christ is surrounded by an elongated nimbus, or halo, decorated with the rays of the sun. Sometimes called a mandorla, this almond-shaped design signifies divine or heavenly presence, and its use in ecclesiastical art is restricted to Our Lord and the Blessed Virgin. An angel hovers, watching the dying Savior. The artist put in many details. Among them, the wooden pegs securing the cross to the ground.

To follow the story chronologically we must first look at the center window. This is the place of honor and it depicts the most important event of the Redemption. We then alternate going from right to left.

The sky is dark, as tradition says Christ rose shortly before dawn. The soldiers appear dazed, as if they had just wakened. The resurrected Christ, surrounded by the radiant nimbus, stands in triumph above his tomb. The wound in his side is clear. He holds a white flag with a red cross, the “Banner of the Resurrection.” An angel, with a palm signifying victory, holds the lid to the tomb. We should note that this window and the window depicting the Nativity are different from all of the other windows. They occupy the entire area without a dividing mullion in the center.

The Appearance of Christ after the Resurrection

The nimbus again surrounds Christ as he appears to his followers. We see the Blessed Virgin with St. Peter kneeling in front of her. The long-haired kneeling figure may be St. John. Two angels worship. In this window, the angels, who are spiritual beings, appear as children’s heads with wings. They are similar to the angels that decorate the sanctuary above the arches.

Tongues of fire issuing from rays of light appear over the heads of Mary and the Twelve Apostles. After Judas’ betrayal, Matthias was elected to fill his place, and the reconstituted Twelve were all present for the descent of the Holy Spirit at Pentecost. All are dressed in elaborate robes. One of the Apostles is holding a book, probably scriptures.

The Assumption of Mary – Far Right

Mary rises above her tomb, which is filled with flowers. According to tradition, Peter arrived after Mary’s death and, when taken to her tomb, found the body gone but the tomb filled with flowers. The angel points to the radiance of heaven to which Mary will be raised. Traditions vary on whether Mary died and was assumed or was assumed at the moment just before death. In defining the Dogma of the Assumption in 1950, Pope Pius XII said that Mary was assumed “when the course of her earthly life was ended,” thereby leaving the question open.

Coronation of Mary as Queen of Heaven – Far Left

Christ is robed as a king, wearing a crown and holding a royal scepter. Both Christ and Mary are seated on a throne. He is placing a crown on Mary’s head. Mary now appears again without head covering. In heaven, there is no status of married or unmarried. Her halo contains the stars mentioned in the Book of Revelation. The elongated nimbus surrounds both Jesus and Mary, the upper portion of the picture is decorated with the stars of heaven. Angels, one with a mandolin and another with a harp, complete the picture.

« The Cathedra | The Raggi Sanctuary Murals »