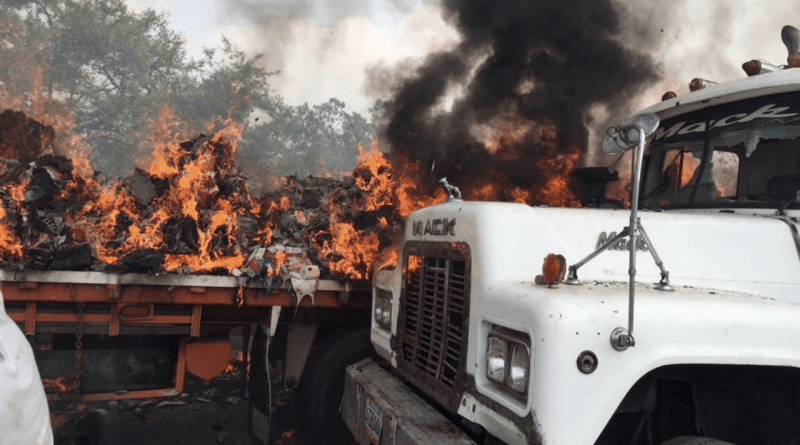 There is a propaganda fight in Venezuela. While Maduro’s regime blames the U.S. for the country’s crisis, unverified reports by mainstream Western media have been spreading inflammatory rhetoric.

If you have been on social media recently, you probably know by now that Venezuela has plunged into a major political crisis. Despite emblematic violence, shortages, and hyperinflation that most notably characterized the end of his first presidential term, president Maduro started a second six-year term on January 10, 2019.

Since then, there have been increasing reports of protests, food and medicine shortages, violence, blockage of humanitarian aid, and, more recently, a large-scale blackout that affected at least 18 of the country’s 23 states and left 26 people dead.

There is no doubt that there is a crisis happening in Venezuela and that change is needed for the Venezuelan people, but Western media needs to be careful to remain transparent and not to increase polarization. Inflated and unverified narratives could be used unwittingly to justify a military intervention.

To illustrate my point, let us discuss the media reports about blockages and burning of humanitarian aid that took place in February.

Since February 4th, more than $195m in food, hygiene kits, medical equipment, and other goods has been shipped to Colombia, so that it can eventually make its way into Venezuela.

Maduro has resisted the entry of U.S. humanitarian aid, deeming the delivery of aid a “cheap and bad” show led by the opposition that portrays Venezuelans as beggars, insisting that the country could overcome its internal problems if it weren’t for the economic problems caused by U.S.-led international sanctions.

On February 23rd, four aid trucks arrived in Cúcuta, Colombia, at the border with Venezuela. Shortly after crossing the Francisco de Paula Santander bridge that connects both countries, the aid convoys ran into Venezuelan security forces that blocked further entry into Venezuelan territory. When the trucks arrived, protests erupted between the security forces and protesters on the bridge, which eventually led to the burning of two aid trucks.

Everything was documented on video. The news spread like wildfire—”Venezuelan forces burn food and medicine aid convoy, while millions suffer from illness and hunger.” This version of the story was widely shared on mainstream Western news outlets, television networks, and even endorsed by the U.S. Department of State and the Colombian Government.

But the publication of a different version of the video by the New York Times on March 10th showed that the fire was actually started by an antigovernment protester who threw a Molotov cocktail against the Venezuelan security forces.

Just a few weeks before the story of Maduro’s security forces burning humanitarian aid, U.S. Secretary of State Pompeo tweeted a picture of the Tienditas International Bridge, which showed shipping tankers blocking access to Venezuela. This picture was also widely shared in international media, being cited as evidence of Maduro’s cruel regime. This story was also a lie. The bridge was completed in 2016, but tensions between Colombia and Venezuela kept the bridge from opening, so the bridge has never officially opened.

Now, this is not to say that Maduro’s government has not misrepresented the situation in the country. The aid would not have reached the Venezuelan people in the first place because security forces were deployed to stop the aid convoy from reaching its final destination. In addition, Maduro’s administration blatantly denies the true extent of the crisis and has failed to assume responsibility for the situation in the country while millions of people flee and others stay to face increasing violence, shortages, and hyperinflation.

So why do we care about fake news and burned aid trucks when Maduro’s government is already spreading their own propaganda? Well, the spread of unverified reports and inflamed rhetoric distracts the public from the real issues and crises that are being experienced by the Venezuelan people, giving Maduro’s regime more reasons to distrust U.S. assistance, and fueling Maduro’s narrative that the U.S. could be planning a military intervention.

Venezuela needs change, but a military intervention is not the right solution, and the media should not use unverified reports to support it. War advocates seem to forget that regime change is not as easy as it sounds. A U.S. military intervention in Venezuela could have potentially disastrous consequences and undermine the objective of restoring democracy and the rule of law.

In Iraq, U.S. officials initially argued that the war would not last more than five months, citing the weakness of Iraqi forces. Sixteen years later, there are still U.S. troops positioned in the country, reportedly seeking to stabilize regions controlled by the Islamic State. There are no indications that military regime change in Venezuela would be any easier.

Despite some defections into Colombia, Maduro still has support from the Venezuelan army, which could turn a seemingly quick and easy regime change into a protracted conflict with regional consequences. Colombia, the closest U.S. ally in South America, just recently signed a peace agreement with one of the country’s oldest left-wing guerillas, the Revolutionary Armed Forces of Colombia. A neighboring military escalation would undermine Colombia’s political and economic stability by shifting limited funds away from the implementation of the peace accord and into a neighboring conflict.

In an era where fake news spreads almost instantaneously, it is essential that media outlets verify information and provide transparent reporting. Inflated and unverified reporting in Venezuela has only increased polarization and support for a military intervention, moving the country away from achieving a much needed peaceful political transition.

One thought on “The Propaganda Fight in Venezuela: Who Burned the Aid Trucks?”