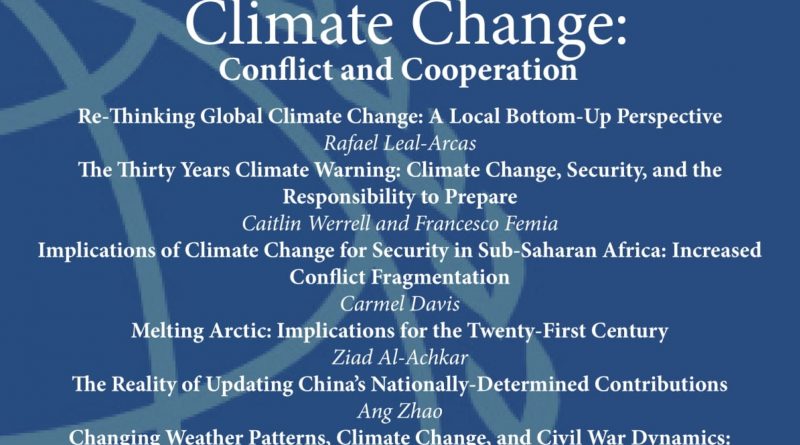 Climate change has proven to be the defining issue of the twenty-first century as temperatures continually rise, weather events become increasingly unpredictable, and sea levels threaten coastal communities. It has become the multi-headed beast the international community must learn to slay as problems perpetually emerge from the effects of advancing environmental degradation. As a result, the economic, infrastructural, and societal costs of climate change have begun to put international organizations, states, and civil society at odds.

Conflict both within and between states has shaped the dialogue surrounding climate change and how to mitigate its effects. Civil society organizations have begun to call into question just how effective the international community can be in preventing climate disaster in the near future.

In the first issue of our 20th volume, the cooperative and conflictual nature of climate change in international relations is explored. Rafael Leal-Arcas analyzes the necessity of a symbiotic relationship between bottom-up and top-down negotiations to implement clean energy consumption. Following, Caitlin Werrell and Francesco Femia begin this issue’s dialogue on climate change and security. Carmel Davis discusses the effects of climate change on Sub-Saharan Africa’s ability to develop and subsequently mitigate conflict. Similarly, Ziad Al Achkar outlines the economic, environmental, and security threats in the Arctic as its ice continues to melt. Zhao Ang then discusses China’s ability and incentives to pursuing a greener economy. Following, Buddikha Jayamaha, Jahara Matisek, William Reno, and Molly Jahn discuss the security and development of climate change implications in the Sahel region.

The main portion of this issue proudly concludes with the Journal’s interview with former Swiss Ambassador Therese Adam on climate change negotiations and the great potential for civil society engagement.

Following the climate change portion of this issue, we feature a special sup-topic: Africa Rising. Here, Peter Schraeder discusses the effects of President Donald Trump’s foreign policy in Africa. Juan Macías-Amoretti analyzes the role of Islam in Moroccan politics, while Karim Bejjit concludes with a discussion on Morocco’s growing relationship with the AU.

The Journal sincerely hopes that you enjoy this issue and the light it sheds on the growing issues surrounding climate change in the international community.