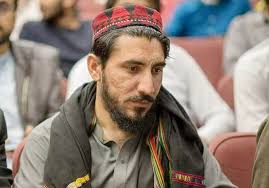 By Zehra A. Khan

Emerging out of thin air, a charming bearded tribesman in his early 30s, Manzoor Pashteen, has caused quite a stir in Pakistan. The anti-war activist has upset the delicately balanced nature of democracy in Pakistan by lending a voice to tens of thousands of Pashtuns demanding an end to extrajudicial killings and abductions by the Pakistani state. Local and international NGOs have reported thousands of missing people in Pashtun dominated regions of Pakistan over the past ten years. These regions include the Federally Administered Tribal Areas (FATA) and Balochistan – regions which have been at the forefront of the War on Terror. Unfortunately, the Pakistani state has disregarded humanitarian concerns of the Pashtun community, defending their actions as necessary to rid the country of homegrown terrorism.

Now a secular movement, Pashtun Tahaffuz Movement (PTM, Pashtun Protection Movement), led by the charismatic Manzoor Pashteen, has struck a chord with thousands of Pashtuns, who say, “enough is enough.” PTM holds both the Pakistan military and Islamists accountable for the destruction and havoc wreaked in their regions.

Essentially an anti-war campaign, the PTM emerged as a result of the killing of the 27-year-old Naqeebullah Masood – who was killed by the police in the south of Karachi on 20th January 2018. Official state authorities claimed that Masood had ties with Islamist militants, a charge vehemently denied by his family and close associations. Civil society activists have also supported Masood, arguing that Pakistani authorities have long used the pretext of the War on Terror to persecute Pashtuns, who have commonly been branded as Islamists or militants by the state and media because of their ethnic association with the Taliban, who are also a Pashtun-dominated outfit.

Manzoor Pashteen’s demands are clear and concise. He is asking for the release of all “missing people.” Pashteen posits that, if these missing people have committed any crime against the state of Pakistan, they should be tried as citizens of the state in courts of law. Second, Pashteen has called for the establishment of a judicial commission in Pakistan, that assesses the legitimacy of extrajudicial killings committed so far. Finally, Pashteen demands that all landmines planted during security operations during the War on Terror, be cleared by authorities in FATA, that the paramilitary forces stop harassing Pashtun families on the pretext of search operations. Additionally, Pashteen demands that the number of security check posts be reduced in the northwestern areas, and that Pashtun citizens of the state not be subjected to constant embarrassment.

As Pakistan prepares for the general elections in July this year, it should be emphasized that if democracy is to continue unhindered in the country, Pashtun concerns must be weighed in the national discourse. Dismissing Pashtun concerns, as has been the norm with the Pakistani authorities, will no longer silence 15% of Pakistan’s population (approximately 207 million, according to the 1998 census). Nascent, though it may be, democracy in Pakistan should try to encompass the concerns of its citizens – this means being sympathetic towards ethnic and religious minorities, such as the Pashtuns. Without embracing the diversity of Pakistan’s citizenry and establishing a truly representative government, the country risks losing its fragile democratic grip to the Pakistan military. Denouncing peaceful protests with legitimate concerns, as was recently observed by the Army Chief’s remarks, implies further alienating the Pashtun community. Alienation can only cause additional roadblocks for democracy to take a stronghold in Pakistan and provide opportunities for the Pakistan military to once again step in to take charge. Finally, the Pakistan military should be cognizant of laying blame to foreign powers for peaceful protests in the country. By pointing fingers at international rivals (namely India and Afghanistan), the Pakistan military deliberately misplaces blame from domestic grievances onto the international platform. This can have serious repercussions for regional peace and stability in the long-run.

Perhaps now, more than ever, is a prime opportunity for the Pakistan state to rectify some of its past mistakes and pave the way for a strong democratic future. This will most definitely start with bringing the military under the writ of court laws.

Zehra Ali Khan, class of 2018 is an M.A student at the School of International Relations and Diplomacy, Seton Hall University. Her concentrations include: International Economics & Development and Post-Conflict Reconstruction & Sustainability. She is a passionate Women’s Rights advocate, and as such, strongly encourages everyone to read The Second Sex by Simone De Beauvoir once in their lifetimes!