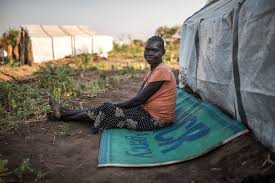 Last Wednesday, the United Kingdom’s ambassador to the European Union handed the letter to EU Council President Donald Tusk that officially announced the UK’s intentions of invoking Article 50 of the Lisbon Treaty. In the letter written by Prime Minister Theresa May, she said “failure to reach a trade deal within the two-year limit could ‘weaken’ cooperation in the fight against crime and terrorism,” reports the BBC. The terms of the treaty allow two years to reach their agreements.

A teen from the Netherlands who planned a holiday in Sydney, Australia actually ended up in Sydney, Nova Scotia much to his surprise. He told CBC that he booked the flights because they were the cheapest, and he arrived in snowy eastern Canada without the proper clothing. He realized his mistake when he got on a small Air Canada plane after his connection in Toronto, wondering if the small plane would make it all the way to Australia.

Bidi Bidi, located in Uganda, has become the world’s largest refugee camp with at least 270,000 refugees. Uganda has welcomed 800,000 people fleeing conflict and famine from South Sudan. According to the Guardian, Uganda has one of the most compassionate refugee policies, but it is beginning to feel neglected.

According to BBC, 45 people were injured and 11 people were killed in an explosion in St. Petersburg. The blast hit a train between Sennaya Ploshchad and Tekhnologichesky Institut stations, said the head of Russia’s National Anti-Terrorist Committee. They are still investigating possible causes despite finding an explosive device.

An Egyptian court ruled that a controversial deal to give Saudi Arabia two islands in the Red Sea can move forward. The ruling may be a sign that relations between the two countries are getting better after experiencing tension in recent months, according to Al Jazeera. The decision must be approved by parliament before the action is made official.

What profession allows one to carry multiple diplomatic passports and regular tourist passports?