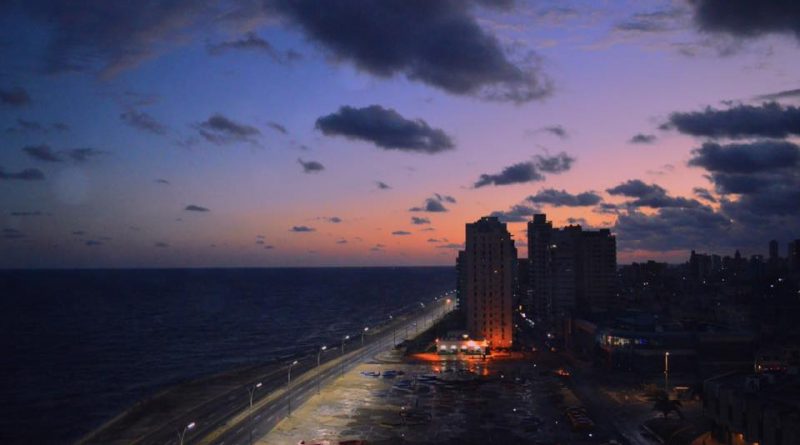 The Republic of Cuba, located in the Caribbean and with a population around 11 million, has been under communist rule since the end of the Cuban Revolution in 1959. The United States has sustained diplomatic isolation since 1962 and applied the Cuban embargo in an attempt to force the Cuban Regime to adopt a representative democracy. Three of our journal staff members had the opportunity to spend a week on the island and now present three different perspectives on the experience. We would like to thank our instructors Dr. Benjamin Goldfrank and Mr. Anthony DePalma for organizing this trip and their continued commitment to our social, political, and cultural experiences abroad.

Can Cuba be seen from a perspective other than the American embargo? Traveling with a group of Americans can make that a challenge. The complicated U.S.-Cuba relationship has undeniably affected the island. But is Cuba’s uniqueness only a result of North American policies? Going to Cuba showed me the importance of a new viewpoint. I now offer you the insights of a Brazilian graduate student, specializing in Latin America affairs.

While imposing economic hardship, the embargo also created an anti-America discourse in Latin America. The region is famous for its leftist leaders that strongly align with Cuban resistance against American intervention. It was only when I refrained from looking at Cuba just as an anti-U.S. experiment, however, that I managed to really see what was in front of me. While Cuba shares many commonalities with other Latin American countries, the island chose a distinct path. Very different from vibrant large cities such as Sao Paulo, in Brazil, or Buenos Aires, in Argentina, Havana reminds me of those places fifty years ago, colored by Cadillacs and no-fence houses. Beggars are rarely spotted on the island, although intense economic adversity threatens to change this scenario. Most Cubans do not want a capitalist invasion. That “stopped in time” impression is also seen by the lack of otherwise widespread technology in the rest of the region. As poor as many Latin American countries may be, more excluded sectors are increasingly having more access to the Internet and broadcast resources.

Restricted access to information is one of the main criticisms made by Cuba’s youth. Unsurprisingly, controlling information and dissatisfaction has been closely monitored by the Cuban regime. It is highly unlikely that in present-day Cuba, thousands of angry citizens, like those who took to the streets in Brazil and ultimately led to President Dilma Rousseff’s impeachment in 2016, would protest in the same manner. Restriction of speech and information are present in other Latin American countries as well. In Venezuela, Cuba´s main ally, freedom of press, is under an alarming situation. The country also leads a Bolivarian campaign to foster regional integration, seeking to limit North American influence in Latin America. The U.S. embargo reinforces this movement and the previous 1959 Cuban Revolution. In that context, the revolutionary figures of Fidel Castro and Ernesto “Che” Guevara are widely explored. Together with the less known revolutionary Camilo Cienfuegos, these figures are featured in almost every souvenir sold in Cuba. What should be the embargo’s target, human rights violations and the restoration of democracy, ends being surpassed by ideological clash. Each side is so worried about stating its political position that, at the end of the day, nothing changes.

When you overcome that outdated Cold War rivalry, however, a new analysis is possible. Cuba is building its new role of influence in Latin America that distances itself from being only an anti-U.S. militant. For instance, the island hosted the historic peace accords between the government of Colombia and its largest guerrilla group, the Revolutionary Armed Forces of Colombia (FARC). Raul Castro is supposed to step down at the end of the year, which would offer the possibility of new leadership and opportunities for the island. Can Cuba sustain a new role in the continent or will its importance in Latin America be restricted to defying the Yankees?

Joel: Bread and Circuses: Is Cuba’s Paquete a Double-Edged Sword?

Cuba is facing a digital fork in the road. Thawed diplomatic relations with the United States have given new life to the prospects of Cuba’s revamped socio-cultural identity. This is one, which has been torn between Havana’s repression of information and communication technologies and a budding global network ready to push Cuba into the 21st century. For years, the Castro brothers’ censorship of broadband internet on the island has stifled the people’s access to information outside of Cuba. Despite this strict restriction, a loophole was opened nearly a decade ago through an underground distribution network that circumvents the state’s control over public consumption of foreign media.

El Paquete Semanal, or the Weekly Package, regularly amasses a terabyte’s worth of digital content onto hard drives prepared for nation-wide circulation. Talking with those who have consumed media through this particular channel, it is apparent that Cuban people love entertainment and they will continue to go down this route in order to have greater access to Hollywood movies, MTV, and VEVO. While this illegal practice has provided millions of Cubans with the entertainment they have longed for, it is difficult to ignore the paradox inherent in El Paquete’s duality. On the one hand, the underground service has brought popular forms of music, movies, and television series from the U.S. and elsewhere to the island. Transversely, some have argued that the Package functions as a societal sedative numbing the public from pushing the government for greater reforms.

Authoritative regimes are mindful of tactics which can be overly repressive of their people. With enough social, economic, and political pressure, people will reach a tipping point where their rights have been infringed upon to the point of fighting back. If individuals holding positions of power were to loosen their restrictive grip just enough to superficially appease the masses, the incentive to rise up dissipates. As far-stretched as the notion may seem, none come even close to the strangeness of the conspiracy theory suggesting that the Cuban government has been behind the creation and distribution of the Package all along. The relaxation of authoritative tactics would be one way of explaining the state’s apparent motivational lull in enforcing crackdowns of the illegal, yet, very popular file-sharing practice in Cuba.

What remains constant in our talks with young, every-day Cubans is that a more accessible internet with less restrictions and lower costs is paramount. Cuba has been exposed to the outside world in an innovative way. The hope many have for its future echoes that of the Roman poet, Juvenal, who decried the shallowness of commoners distracted by the cheap offers and theatrical displays of food and entertainment as panem et circenses: bread and circuses. 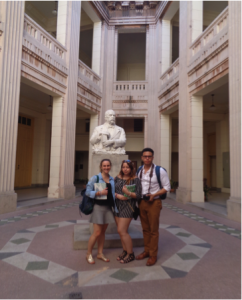 Marisela: “Look at us now JFK”

There is more to Cuba than cigars, rum, antique cars, and the embargo. My recent visit to Cuba was an eye-opening experience. The Cuba that Fidel Castro left behind is by no means the same Cuba I heard about during my adolescence. I must admit as a group of Seton Hall Students, our experience felt sheltered and safe. Growing up in Miami, Florida, a predominantly Cuban community full of Cuban exiles, I developed an Anti-Castro mentality and always hated communism and everything it stood for. I will forever have engraved in my memory the statue located at Havana’s Anti-Imperialist Plaza, of José Martí holding Elián González and pointing aggressively at the U.S. Embassy; an Embassy that as an American student I was able to see first-hand. My memory was triggered that day and I remember the pain and fury Miami endured in 2000, when there was a custody battle over Elián. This is when I first learned to understand human rights violations and social and economic inequality, specifically in Latin America. There is no doubt that during the nineteenth century, many countries faced civil wars and regime changes that forced millions to flee and seek a better life. However, many arrived without the same amenities as Cubans coming to America. After congress passed the Cuban Adjustment Act (CAA) in 1966, and the amended “Wet-Foot Dry-Foot” policy in 1994, Cubans were granted permanent residence after a year. This residency increased their likelihood of becoming American citizens faster than any other country in the world. Today, 2.8% of the total U.S. immigrant population is made up of Cubans.

The current goal of the Cuban government is to create a rich economy without creating rich individuals. Before this trip, it would have never occurred to me to call Cuba a tropical socialist utopia, however after my stay in Havana a poor socialist utopia is what I think of her. The country is far from perfect, but for the most part everyone seems happy. Most students I spoke with expressed contentment with their lives. Students are paid to attend college therefore they are free of student loan debt, everyone has free healthcare, and best of all rent is free. However, what about those I did not speak to who do not get into Havana University, or are unable to attend because they need to start working and help their families? Is free rent, health care, and education as important to them? There are those who speak up against their government, but rebellion and protests are no longer common. It was said to me, if Cubans wanted another revolution they would have it. Though many aspects of the Cuban social order seem unconventional to an outsider, those who live in Cuba are accustomed to both the benefits and limitations of the country’s restricted economy. Poverty is a real issue in Cuba, but the country’s social programs guarantee a degree of protection. Thanks to recent legal changes, Cubans can now become private business owners and supplement their income.

Though my experience in Cuba was limited to a week, more people I interacted with expressed concerns with improving everyday infrastructure than implementing broad political changes. As a daughter of immigrants from Latin America, I was struck by the difference between attitudes in Cuba and in my community. Though the country has many advantages, including a 99% literacy rate, it is still constrained in many ways by the structure of the communist government. I hope the years to come for Cuba are full of prosperity and growth for not just the government, but for the 11 million citizens that reside there as well.