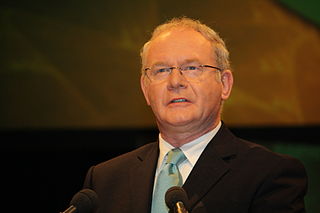 Former Northern Ireland deputy first minister Martin McGuinness died last Tuesday of a rare heart disease that was the reason for his retirement from politics. A former commander in the Irish Republican Army turned peacemaker, McGuinness was heavily involved in negotiating the Good Friday Agreement, and he has been described as a “giant of Irish politics” according to the Belfast Telegraph. Thousands descended upon his hometown of Derry for his funeral, including former president Bill Clinton.

Egypt’s ex-president Hosni Mubarak was freed after serving six years in prison. Al Jazeera reports he was acquitted for his supposed role in the killing protestors in Cairo in the 2011 uprising even though he was sentenced for life. He returned to his home in a suburb of Cairo, and other Mubarak-era figures are also gradually being cleared of any charges.

Turkish citizens have begun to vote on whether or not to move Turkey from a parliamentary republic to a presidential one. According to BBC, “Turkish citizens in six European countries have started to vote in a referendum, the campaign for which has caused an international dispute.” This has caused issues with Turkey and its European neighbors.

Scientists have discovered that the Kaikōura earthquake moved New Zealand’s South Island five meters. The 7.8 magnitude earthquake that occurred in November has changed the way scientists are thinking about this natural phenomenon around the world, reports Radio New Zealand. Dr. Ian Hamling said this earthquake is one of the best-recorded ones in the world, making it a perfect case to study the behavior of large quakes.

Kevin Hyland, the UK’s independent anti-slavery commissioner, has criticized police forces for failing to deal with enslaved Vietnamese teenagers who are brought to work illegally on cannabis farms in the UK. According to the Guardian, “Vietnam is consistently one of the biggest source countries for trafficked labor into the UK.” Vietnamese men are often forced to work on cannabis farms while women are forced to work in nail bars.

Which previous US President vomited on Japanese Prime Minister Kiichi Miyazawa during a diplomatic banquet?