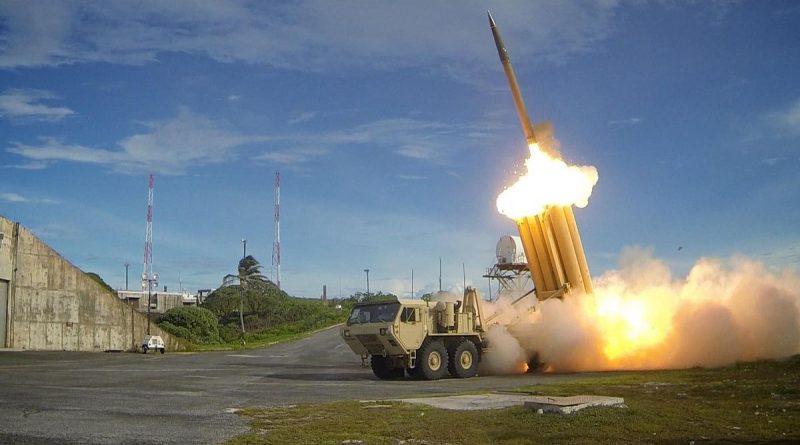 By Michael Hamilton
In July of 2016, the United States and the Republic of Korea mutually agreed to place the Lockheed Martin Terminal High Altitude Area Defense ballistic missile defense system or THAAD to the Korean Peninsula, much to the dismay of China. While THAAD is meant to provide missile defense against the North Korea’s expanding ballistic missile program, China is concerned that the system could be used against them in the event of an aggressive conflict in the region. And, with recent North Korean missile tests targeted at Japanese military bases coinciding with the first phase of THAADs deployment in Seongju, South Korea, it seems like THAAD is a necessary security measure for North East Asia, but not without the consequences of a Thucydides trap or security dilemma.

Lockheed Martin touts THAAD as having “100% mission success in flight testing since 2005,” with THAAD being an element of the Terminal Defense Segment of the Ballistic Missile Defense System according to Missile Defense Agency budget. As an element of the greater BMD system, THAAD is interoperable with other BMD systems to intercept short and medium range missiles in or outside the atmosphere. Essentially, THAAD is a truck with that can fire multiple missiles on the back, ironically resembling the Hwacha, an ancient Korean rocket arrow launcher to defend against Japanese invasions. The weapon fires an intercepting missile to destroy the target mid-flight, using highly advanced radar and sensor technology.

While THAAD is aimed at intercepting the North Korean missiles to give the South some security against the belligerence of its neighbor, China is deeply concerned about the advanced sensor and radar technology that THAAD possesses. The Chinese believe that’s THAAD’s placement in South Korea could give the United States a strategic edge against its own second strike capability. North Korea has not been a very stable and cooperative ally for China, but acts as an important buffer-zone against American encroachment. More armaments placed in the already volatile region affect all actors, not just the ones that the barrels are aimed at. Kenneth Waltz states in Theory of International Politics, insecure states are “compelled to ask not “Will both of us gain?” but “Who will gain more?””, posited to describe the logic of relative gains in structural realism. It is this mind-set of relative gains that has China worried, creating the geopolitical security dilemma that has Japan debating the merits of first strike capability. 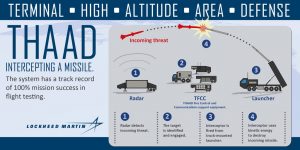 China has taken retaliatory measures against South Korea for THAAD, in an attempt to dissuade it from housing the defense system. These measures are economic in nature, with major targets being chaebol Lotte group, which has a major retail presence in China, as well as some K-pop stars, putting a levy in the wake of the Hallyu wave. And while this economic backlash is sure to hurt South Korea, THAAD’s early deployment seems to indicate that Korea views its security commitments with the United States of greater importance to Chinese economic backlash. A meeting with Secretary of Defense James Mattis earlier this year did provide South Korea security reassurance, despite mixed messages from President Trump on nuclear proliferation.

In response to this deployment of THAAD, China’s foreign minister Wang Yi had suggested that North Korea stop its missile tests, while the United States and South Korea cease its joint military operations. The State Department has criticized this deal as being unviable, but China’s approach may be more realistic than critics suggest. Not only does China’s proposition diminish the negative effects of a security dilemma, but research on United States foreign policy on the Korean Peninsula by Yoon Jong-han shows that North Korea, and the ROK-US alliance both engage in reciprocity in their behavior. This pattern of reciprocity follows game experiments that show tit-for-tat strategies of reciprocity are the most effective in iterated games, but fall to a negative “echo effect” when both parties engage in mutual defection. The former case is the current case of the Korean peninsula. However, in Achieving Cooperation under Anarchy, Robert Axelrod notes that a tit-for-tat strategy that sometimes forgives can prevent this echo effect from occurring. China’s policy suggestion of mutual disarmament could create that “sometimes forgive” option that would cease further escalation of insecurity in the region.

Although China’s policy suggestion of removing the hostile factors out of the Korean peninsula may just be a ploy to serve its own security interests, a reinterpretation of the situation away from relative gains to absolute ones could indeed provide the peninsula with greater security than putting weapons on it. While North Korea is certainly the problem child of the North East Asian region, that does not mean it cannot change the way it plays the game. With the decline of United States influence and a failure to pivot towards Asia, China may provide the region with the strongest argument for soft strategies in foreign policy, as they are supported by empirical data, and empirical reasoning alike. But regardless of hegemonic control of Asia, any more missiles being placed in the region will surely just add to more problems instead of creating peace.

Michael Hamilton is an MBA/Diplomacy and International Relations student at Seton Hall University. He specializes in using game theory, economics, and existentialism to explain decision making at the individual-level to the level of international relations.