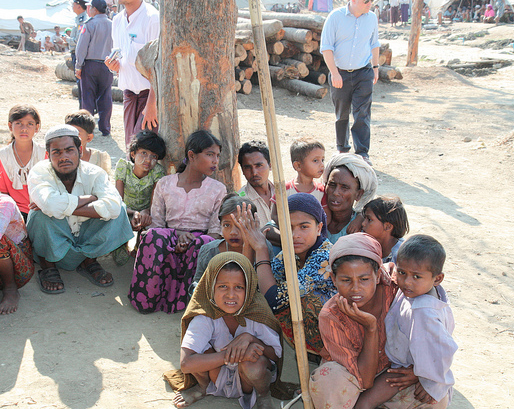 The Rohingya, a Muslim minority in Myanmar, have been called the most friendless people in the world, and their persecution is thought of as the world’s invisible genocide. However, just recently the struggle of the Rohingya people began moving into the international spotlight. Spurred by a report from Human Rights Watch detailing the destruction of Rohingya villages using satellite imagery, major news organizations from around the world began to report on the atrocities suffered by the Rohingya people at the hands of their own government. As a result, the United Nations decided to send a Human Rights Envoy to investigate the claims of human rights abuses and genocide. In addition, Myanmar sent its own special envoy to Bangladesh to discuss the repatriation of those that fled the country which some view as a sign of progress moving away from Myanmar’s past reluctance. I, however, argue that despite these efforts and the increase in media attention, the plight of the Rohingya people will likely see no improvement in the near future and may in fact intensify. Myanmar may face a new set of sanctions for its human rights violations before this issue is resolved.

The Rohingya crisis dates back to 1982 as the Burmese Citizenship Law did not list the Rohingya as a national minority of Burma and left them ineligible for citizenship. From 1988 to 2010, Myanmar’s military government segregated the Rohingya people to Rakhine State on the West coast of the country. After being falsely labeled as illegal immigrants from Bangladesh, the Rohingya have been forced to live in internment camps in Rakhine State suffering from malnutrition with little access to medical services and restrictions on their movements. The situation escalated in 2012 with violence between Rakhine Buddhists and Rohingya and more recently in October 2016 when Myanmar’s government alleged that Rohingya militants attacked border guard posts in Rakhine State. Since this allegation, the persecution of the Rohingya people has intensified as the military has been reported raping and murdering the Rohingya as well as burning down their camps. Myanmar’s government has denied claims of genocide after conducting its own investigation. Around 65,000 Rohingya have fled to Bangladesh to escape persecution and who knows how many have perished at the hands of the military.

Politically, Myanmar has been quite dynamic as the country began making the shift to democracy in 2011. After undertaking many reforms and reconnecting with the international community, in 2015 democratic elections were held in the country ending over fifty years of military rule prompting the removal of many international sanctions. Since the election, however, the limits of the elected State Counsellor Aung San Suu Kyi, are becoming apparent. This is evident as Aung San Suu Kyi has been inactive in quelling the Rohingya persecutions and largely silent about the issue as a whole. Her hands are likely tied as the new constitution granted the military veto power over constitutional changes and guarantees twenty-five percent of seats in Myanmar’s legislature will be occupied by military representatives. It is becoming increasingly clear that while Aung San Suu Kyi controls the country, she does not control the military giving her no power to save the Rohingya people.

Efforts to resolve the Rohingya crises have already faced several roadblocks. The Human Rights Envoy sent by the United Nations has already been denied access to some areas of Myanmar’s northern Rakhine State. In addition, the rapporteur has only been permitted to speak to individuals pre-approved by the government when visiting Rohingya villages. These actions have undermined the investigation significantly and will make it difficult to prove human rights abuses have taken place. Furthermore, Bangladesh has demanded that Myanmar take back the Rohingya that crossed the border fleeing from Rakhine State. While the Rohingya refugees are straining relations between the neighboring nations, if these people are repatriated to Myanmar, they will once again be subject to human rights abuses by the military.

With Aung San Suu Kyi’s limited power in this situation and the UN rapporteur facing obstructions, the situation looks bleak. The Organization of Islamic Cooperation’s Myanmar Special Envoy has called for the UN to intervene in Myanmar to avoid another genocide like those in Cambodia and Rwanda. Sanctions would certainly be an option as well; however, they could cause significant damage to not only the economy, but also to the people of Myanmar. But as the Obama administration leaves office this week, the UN may be the final hope for the Rohingya people. President Obama was thought of as a powerful friend of the Rohingya people, mentioning their struggle in speeches and encouraging Myanmar’s government to treat them with dignity. While he did not take action on their behalf, his words gave them hope. With this hope gone, the Rohingya are stuck in a state of uncertainty waiting for a new hope to save them from their persecution.

One thought on “Democracy or Debacle in Myanmar: The Tale of the Rohingya”