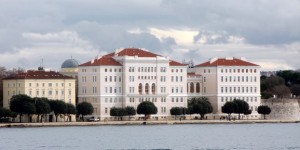 Shortly before leaving for Rijeka, I met with Nedjeljka Balic-Nizic, Professor of Italian at Zadar University and the author of Talijanski pisci u Zadru : pred Prvi svjetski rat – (1900.-1915) , as well as many other publications. It was fascinating to see the work her some of her students were doing on diasporic writers. It is hard to know exactly how to categorize the Croats who in the Late Middle Ages and the Renaissance wrote in Latin, the Croats who while under Venetian rule wrote in Italian  and the Italians who emigrated from Croatia after the Second World who continued to write in their  native tongue. When Dalmatia was under Austrian rule the official language was literary Italian although the Italian spoken in Zadar was a Venetian dialect.  I again met up with Professor Balic-Nizic at the opening of Putovanja i Pezjazi (below), a lovely exhibit that was opened by the President of Trieste University, whom I will visit on Wednesday.

This was a nice affair held in the exhibition space of the  Kneževa Palaca. Organized by the National Museum of Zadar and the Italian Institute of Culture, the exhibit displayed 130 photos of the post-war period taken by Italian photographers in Friuli Venezia Giulia. 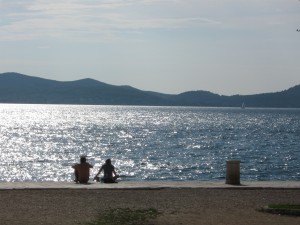 The weekend was spent visiting friends outside the city, but here is a last view of the “Riva” or “Corzo” which was built when the city’s medieval walls along the sea were torn down in the late 19th century. It gives Zadar an optimism and openness to new possibilities that few other coastal cities have.