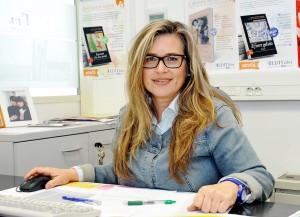 It was a long bus ride to Rijeka. The bus takes you along the old coast road, which used to be the principal route north before the highway was built. It’s a winding road that takes you up, around and through the mountains that come down almost all the way to the Adriatic Sea. However, all my tiredness was forgotten when I met Liliana Venucci, who is head of publishing activities for EDIT. As its Website notes, Edit publishes and markets books dedicated to historical literature as well as contemporary literature, poetry, children’s books, belles letters and in general promotes the culture of the Italian minority in Istria and in the Quarnero. Edit historically has published textbooks for elementary schools as well as middle schools.

This issue of bilingualism and culture will become more prominent because of Croatia’s recent admittance into the EU. The principle of minority rights was established in the EU Constitution. When Croatia became independent it also enacted laws which protected the Italian minority communities in Istria and Dalmatia. Italians in Croatia have dual Italian-Croatian citizenship, run their own schools in Italian and promote their own cultural activities. This wasn’t the case during the Second Yugoslavia, when, for example, Italian associations and Italian schools were closed in Dalmatia, although not in Istria. Liliana was completely persuasive in her arguments that the minority population had the right to maintain its culture and heritage, which includes its own dialect, Istro-Veneto.

Besides showing me the books that Edit publishes Liliana drew me a schematic map of the Unione Italiana’s activities. There are 55 Italian minority associations in Slovenia and Croatia. The Italian Ministry of Education with the help of the Unione Italiana runs an educational program for the children of these groups: kindergartens, elementary and high schools, and University departments of Italian in Rijeka and Capodistria. The Unione Italiana also promotes Italian drama on Italian TV in Capodistria and supports Radio Fiume and Radio Pola.

Again, as is the case with the other Italian associations I visited, these publications have subvention from the Italian government.

I had not been aware of the vast organizational structure that is in place in Slovenia and Croatia to support the activities of the Italian minority population. In my next post I will describe my visit to Trieste, the next city on my travels. 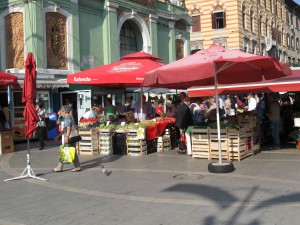 Here’s one last look at the market in Rijeka.