Metformin (Glucophage) is an antihyperglycemic agent that lowers hepatic glucose production, improves peripheral glucose uptake and utilization, and does not cause increased insulin secretion. In fact, “with metformin therapy, insulin secretion remains unchanged while fasting insulin levels and day-long plasma insulin response may actually decrease.” These properties have spawned a great deal of interest in metformin as a treatment for several types of cancers.

A number of observations and studies have demonstrated that use of metformin in patients with diabetes leads to improved outcomes:

Mechanism of action of metformin in cancer therapy

The drug does not kill cells. So, how then, does it improve outcomes in patients with cancer?

Metformin seems to affect multiple key processes related to cell growth, proliferation, and survival. The drug’s effects on these processes stem from both metabolic and intracellular-signaling activity. First, metformin decreases the amount of glucose produced by the liver and reduces the bloodstream level and cellular uptake of insulin. In turn, the reduced insulin stimulation results in reduced activation of insulin receptors on cell membranes, triggering a cascade of intracellular molecular effects, such as the downregulation of the Ras/Raf/MEK/ ERK and PI3K/AKT/mTOR signaling pathways. One or both of these pathways are often activated in many types of cancer cells. In addition, metformin appears to upregulate AMP-activated protein kinase, a key molecule in glucose and insulin regulation and also an inhibitor of mTOR.

Cancer cells require large amounts of glucose to thrive. In addition, signaling of the IGFR is critical for neoplastic transformation mediated by many oncogenes.

Figure 1. Key components of the IGF-1R pathway. The ligands IGF-1 and IGF-2 are both capable of binding and stimulating the catalytic activity of the IGF-1R. Bioavailability of IGF-1 is modulated by a family of IGFBPs, whereas bioavailability of IGF-2 is modulated both by the IGFBPs and by binding to the IGF-2R, an event that leads to receptor-mediated internalization and degradation of IGF-2 in lysosomes. Upon binding by either IGF-1 or IGF-2, the IGF-1R undergoes receptor cross-linking and autophosphorylation, leading to the creation of multiple docking sites for the adaptor proteins IRS-1, IRS-2, and Shc. IRS-1 and IRS-2 binding results in activation of the class I phosphatidyl inositol 3′ kinase, whose catalytic activity is the conversion of PIP2 to the lipid second messenger PIP3. This event recruits the AKT family of kinases to the plasma membrane, where they can be phosphorylated and activated by PDK1 and the mTOR-containing complex mTORC2. Activated AKT then mediates a host of cell signaling events, including disinhibition of the mTORC1 complex and increased protein synthesis and cell growth, increased conversion of glucose to glycogen via inhibition of GSK-3β, and increased proliferation and survival by activation or inhibition of key effectors such as the Foxo transcription factors, p27, BAD, and BCL-2. In contrast, Shc binding to activated IGF-1R results in stimulation of the RAS/MAP kinase pathway, which also leads to increased cell proliferation. http://clincancerres.aacrjournals.org/content/16/9/2512 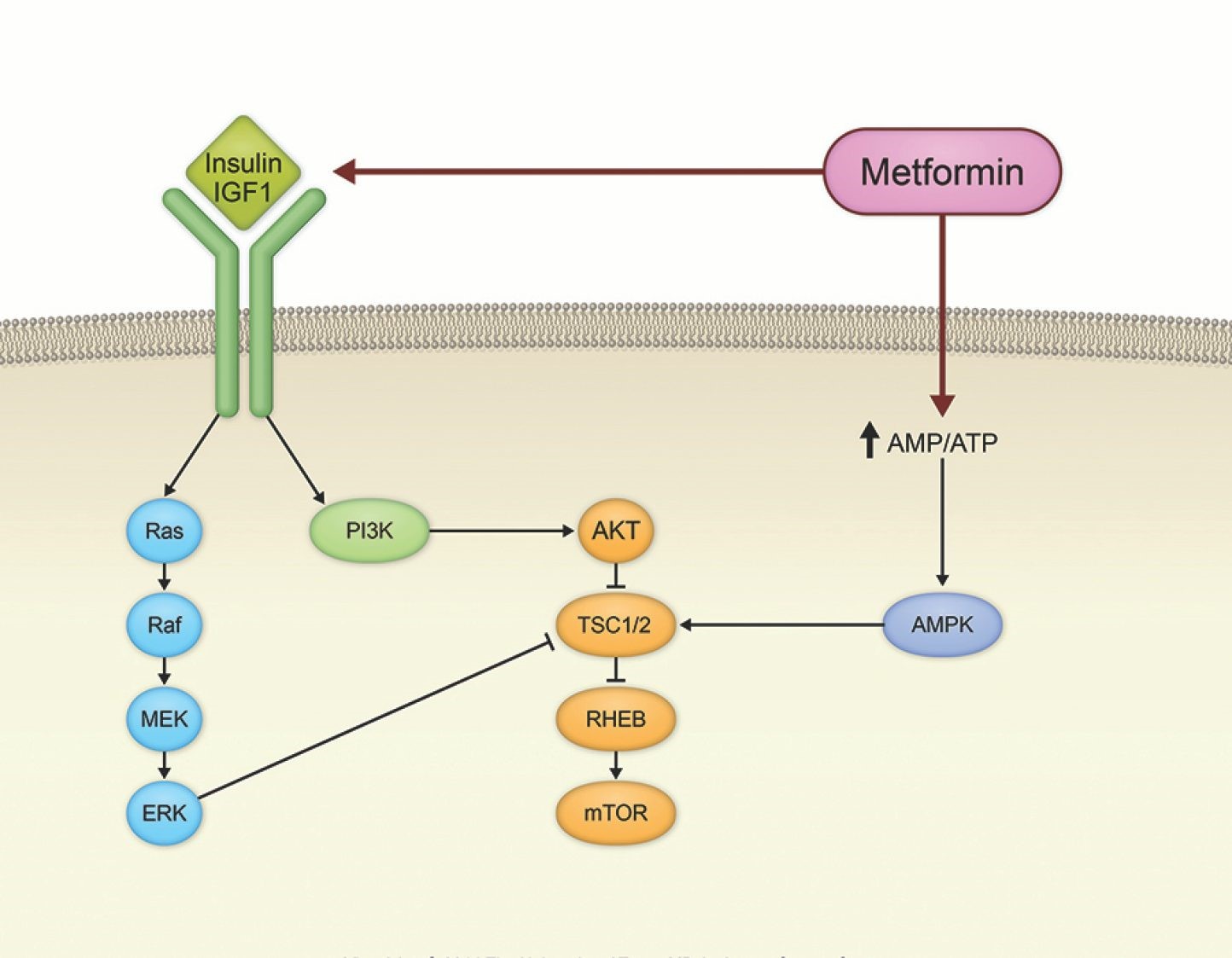 Dr. Pamela Soliman (MD Anderson) first believed that metformin may be active in endometrial cancer when she was treating a patient with the mTOR inhibitor, everolimus, and the anti-estrogen agent, letrozole – the patient developed diabetes as a result of mTOR inhibition (which reduces insulin secretion and induces insulin resistance) and was prescribed metformin:

Based on this, a phase 2 study led by Dr. Soliman that combines everolimus, letrozole, and metformin in patients with advanced or recurrent endometrial cancer is now ongoing. A national phase 3 study in patients with Stage III or IV endometrial cancer is ongoing, as well – patients are randomized to receive chemotherapy with paclitaxel and carboplatin with or without metformin.

Given that altered tumor metabolism is a mechanism by which cancers become resistant to radiotherapy, Dr. Heath Skinner (MD Anderson) performed a retrospective study in patients receiving radiotherapy for head and neck, esophageal, and lung cancers showing that those who were taking metformin had better outcomes. Based on this observation, a study in patients with inoperable stage IB non-small cell lung cancer undergoing radiotherapy is underway. Patients are randomized to receive metformin or placebo.