BMS (Bristol Myers Squibb) acquired all of the outstanding capital stock of Cormorant, the private, Stockholm-based biotech company developing HuMax-IL8, for $520MM. HuMax-IL8, which is currently in Phase I/II trials, is a monoclonal antibody that targets interleukin-8 (IL-8), a protein is expressed by many solid tumors. IL-8 also suppresses the immune system and increases the ability of tumors to metastasize. 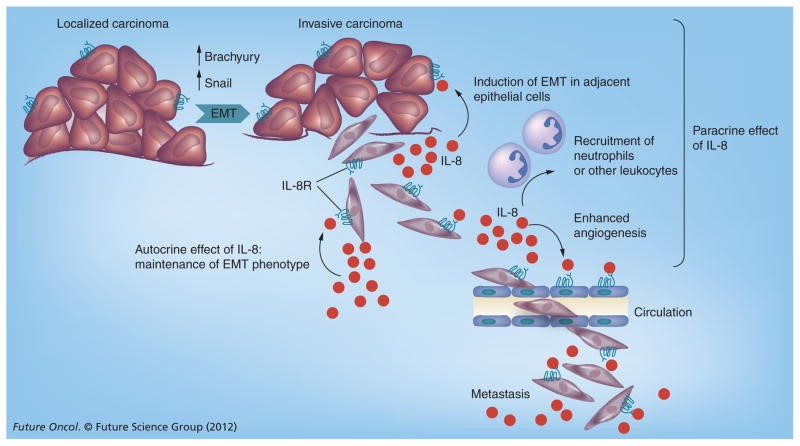 IL-8 is produced by cancer cells – it helps maintain cancer cells in the EMT (epithelial mesenchymal transition) phenotype, which confers motility and invasiveness, and it promotes angiogenesis. IL-8 signaling promotes angiogenic responses in endothelial cells, increases proliferation and survival of endothelial and cancer cells, and potentiates the migration of cancer cells, endothelial cells, and infiltrating neutrophils at the tumor site. Accordingly, IL-8 expression correlates with the angiogenesis, tumorigenicity, and metastasis of tumors in numerous xenograft and orthotopic in vivo models.. In addition, stress and drug-induced IL-8 signaling has been shown to confer chemotherapeutic resistance in cancer cells.

Interleukin-8 (IL-8), alternatively known as CXCL8, is a pro-inflammatory CXC chemokine. Transcription of the IL-8 gene encodes for a protein of 99 amino acids that is subsequently processed to yield a signaling competent protein of either 77 amino acids in nonimmune cells or 72 amino acids in monocytes and macrophages. Expression of IL-8 is primarily regulated by activator protein and/or nuclear factor-κB–mediated transcriptional activity.

The biological effects of IL-8 are mediated through the binding of IL-8 to two cell-surface G protein–coupled receptors, termed CXCR1 and CXCR2. It induces Akt/PKB, MAPK, as well as Protein Kinase C (PKC), which induces inflammation. 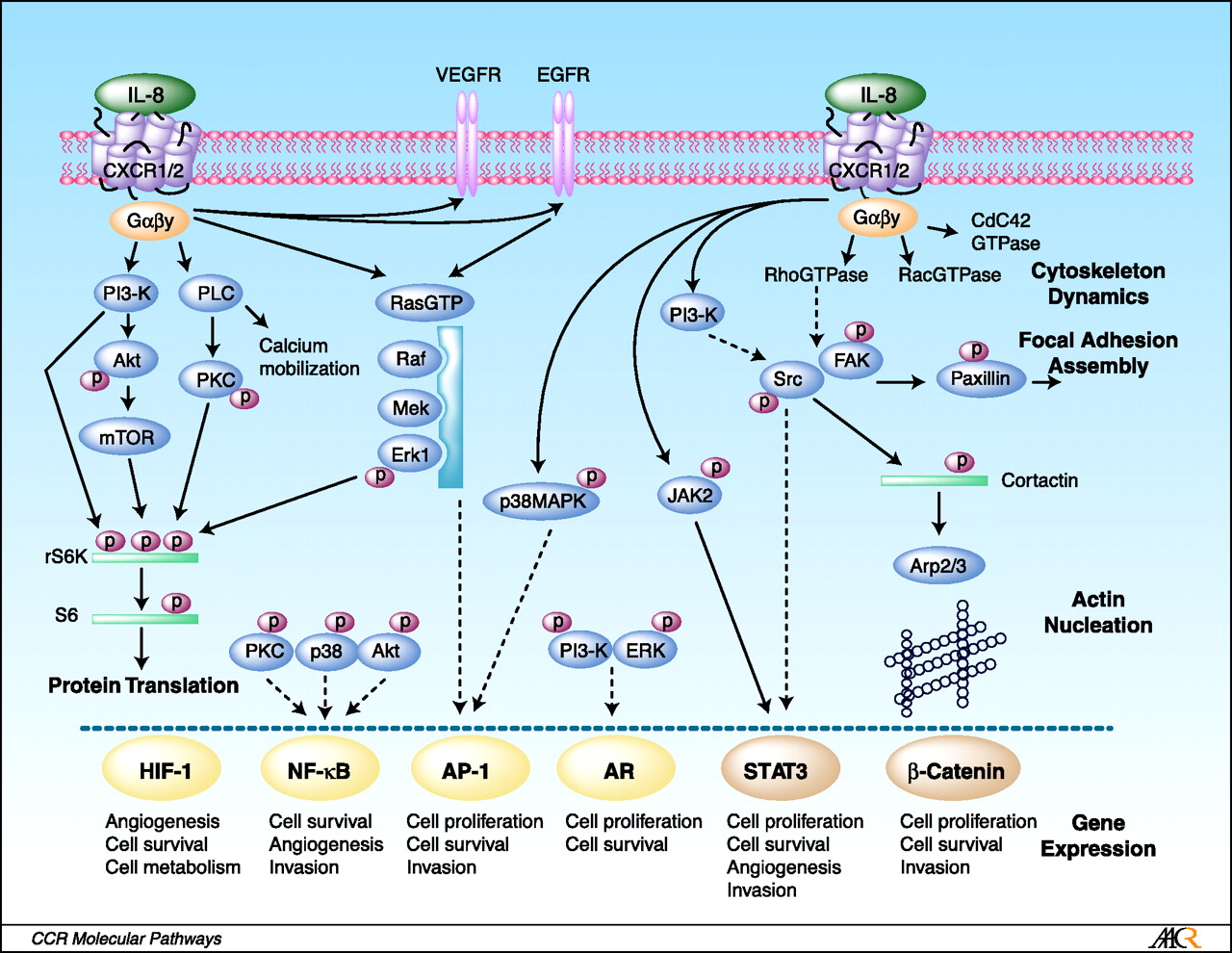 IL-8 induces TAMs (tumor associated macrophages), which are central to the tumor microenvironment. IL-8 signaling increases the transcriptional activity of the androgen receptor in prostate cancer cell lines, suggesting a potential role in modulating the transition of prostate cancer to an androgen-independent state. 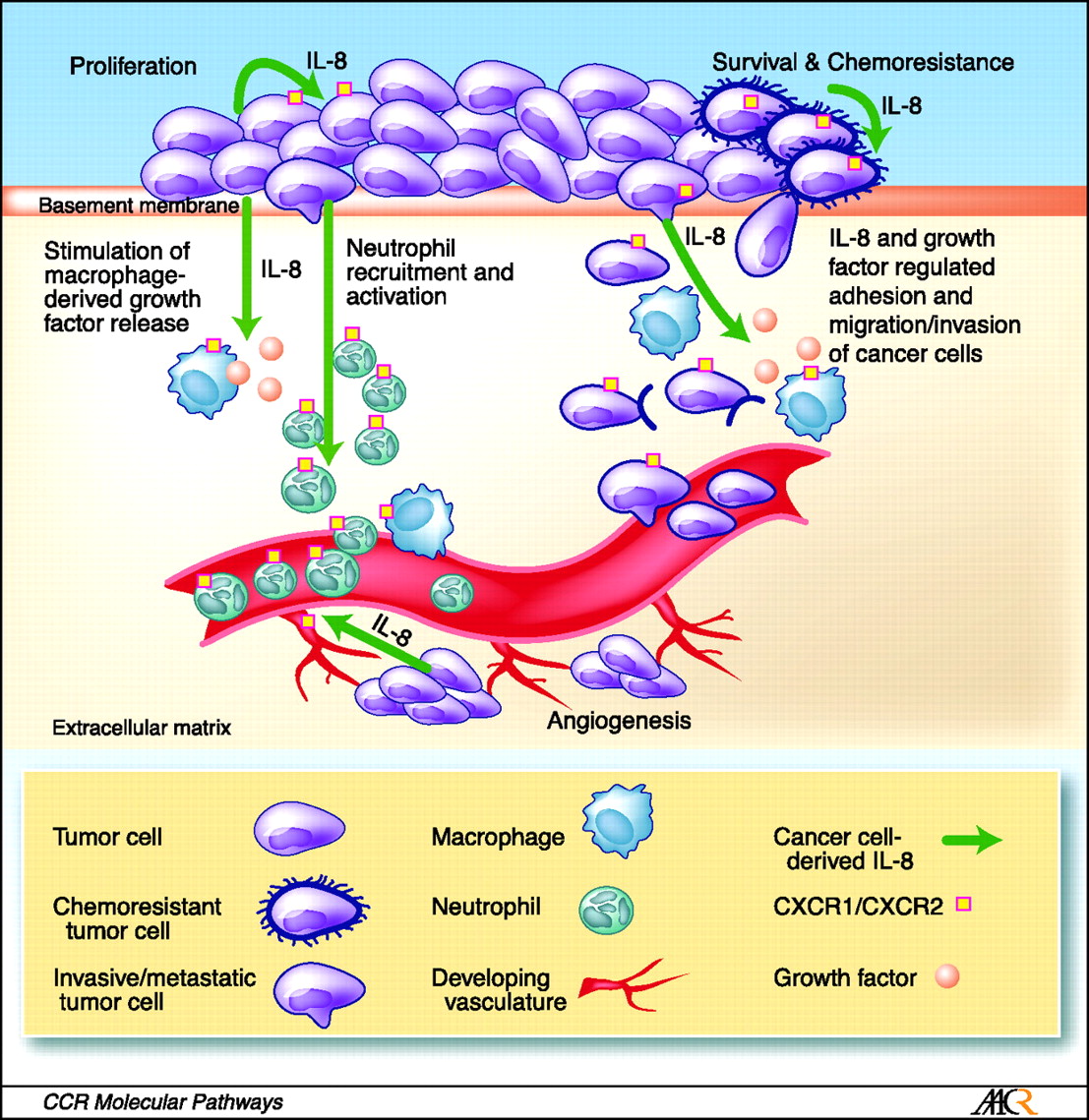 The role of IL-8 signaling in the tumor microenvironment. Tumor-derived IL-8 has the capacity to exert profound effects on the tumor microenvironment. For example, secretion of IL-8 from cancer cells can enhance the proliferation and survival of cancer cells through autocrine signaling pathways. In addition, tumor-derived IL-8 will activate endothelial cells in the tumor vasculature to promote angiogenesis and induce a chemotactic infiltration of neutrophils into the tumor site. Although IL-8 can promote cell invasion and migration, the capacity of IL-8 to induce tumor-associated macrophages to secrete additional growth factors will further increase the rate of cell proliferation and cancer cell invasion at the tumor site. The multiple effects of IL-8 signaling upon different cell types present within the tumor microenvironment suggests that targeting of CXC-chemokine signaling (including but not limited to IL-8) may have important implications to halt disease progression and assist in sensitizing tumors to chemotherapeutic and biological agents. http://clincancerres.aacrjournals.org/content/14/21/6735

A Phase I escalating dose trial of HuMax-IL8 is currently underway at the National Cancer Institute in patients with unresectable advanced stage solid tumors. The drug is administered every two weeks intravenously; two doses constitute one cycle of treatment. This study consists of two phases, the dose-escalation phase and the expansion phase. Subjects will be treated with the study treatment until any off-treatment criteria are met. The safety and efficacy will be assessed until the end of treatment or for a maximum of 52 weeks. In addition, a separate visit will be performed at the time of disease progression if the patient has a progression between end of treatment and 52 weeks. The patients will be followed up for overall survival until the study closure. The study will be closed when all enrolled patients have been followed up for at least 52 weeks or have died.